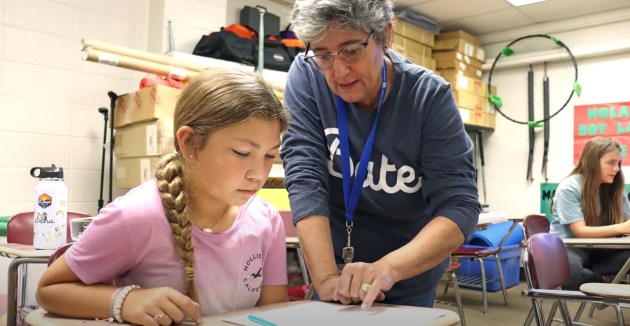 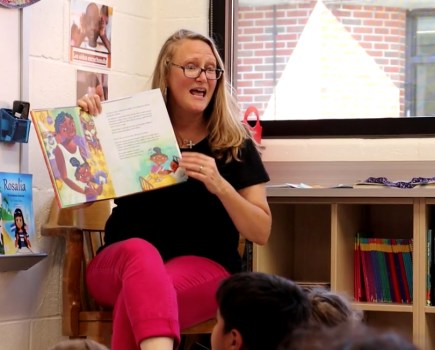 For Hispanic Heritage Month, Mary G. Hogsett Primary School Spanish teacher Kathy Ault has been teaching her students about Spanish-speaking countries and some elements of geography and culture. She’s also teaching them about celebrated people from around the world.

Ault, known to her students as Señora Kati, has been introducing some geography to her kindergarten and first-grade classes by naming the regions of the world that have Spanish-speaking countries and finding them on a map.

She’s also reading a biography each week of the month about an important person from a different part of the Spanish-speaking world. This week, she taught her students about Celia Cruz, a salsa singer from Cuba known as the Queen of Salsa. She will also teach her classes about Diego Rivera, an artist from Mexico, and Luis Soriano, a teacher from Colombia.

Because several of her students are from, or have families who are from Spanish-speaking countries, including Honduras, El Salvador, Mexico and Costa Rica, she also invited them to share what they know about the countries with the class.

“I’ll use their sharing as a jumping off point to lead future lessons,” she said, “and to plant some metaphorical seeds with our young students about the complex concept of culture, and what it means to celebrate one’s culture.”

John W. Bate Middle School’s Spanish teacher, Maria Luster, focused on different lessons for grade levels to recognize Hispanic Heritage Month. In her seventh and eighth-grade classes, she focused on artists and facts about the 21 Spanish-speaking countries of the world, for example.

Her seventh-grade class completed a lesson using a painting by Mexican artist Diego Rivera. Separating the painting into sections, she gave each student in her small class a section to draw and color on a larger piece of paper. By the end of the lesson, the class will put all of the pieces together to create a complete piece of artwork, with each section done by a different student.

Her larger eighth-grade class completed worksheets that asked them to focus on a specific Spanish-speaking country. They drew the country’s flag, where the country’s capital is located on a map, and the country’s animal. They also answered questions in Spanish about the countries’ climates, places to visit in their assigned country, and more.