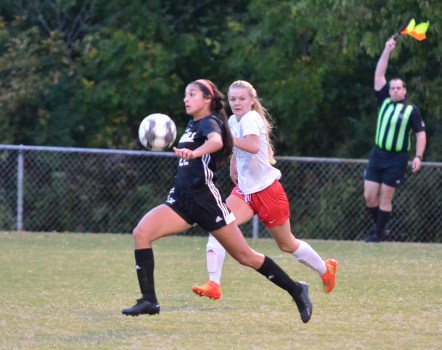 Addison Hazlett, left, of Boyle County gets past Lincoln County’s Delanie Andrus as she approaches the goal during the first half Thursday. Hazlett was called for offsides on the play. Photo by Mike Marsee 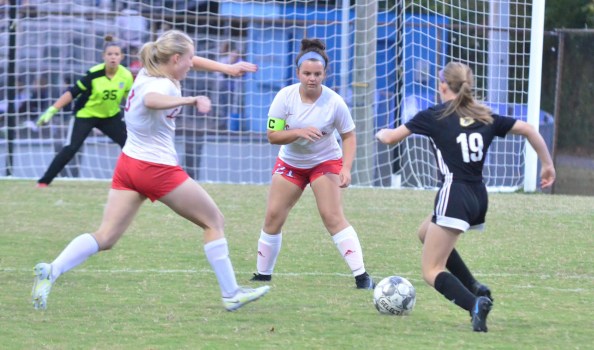 Maggie Burke (19) of Boyle County moves in on the ball as Delanie Andrus, left, and Rayna Wheeler of Lincoln County converge on her and Lincoln goalkeeper Maggie Bowman looks on during the first half Thursday. Photo by Mike Marsee

District championships may be old hat for the Boyle County girls, but it’s always a new experience for someone.

Boyle blanked Lincoln County 6-0 on Thursday night in the 45th District Tournament final at Reynolds Field behind a starting lineup that included eight underclassmen, half of whom got their first taste of postseason success this week.

And while the girls who are playing in their first postseason have watched previous Boyle championship games from the sidelines or the stands, the view from inside the lines was considerably better.

“Watching is one thing, but actually being a part of it and getting to have assists and score and seeing my teammates score is really awesome,” said freshman midfielder Maggie Burke, who had a goal and two assists for Boyle.

The successful fusion of players from all four grade levels helped produce Boyle’s latest title, which is its second in as many seasons and its ninth in 11 seasons within the current configuration of the 45th District.

“It just feels great being a part of this team. Everybody works together well,” Burke said.

Boyle Coach Brian Deem has said that on more than one occasion this season, and he said Thursday that the team’s younger players rose to the occasion in their first district tournament.

Boyle (14-4) attacked the goal all night long to put away Lincoln (13-8) in a game that wasn’t nearly as close as the teams’ regular-season meeting, which the Lady Rebels won 3-1.

The Lady Rebels attempted 37 shots and put two of them into the net in the first nine minutes to seize control of the game.

“We jumped on them early, and that just built some momentum and got everyone excited, and you could see they were a little shell-shocked as well considering how the game went,” Deem said.

Ellery Taylor scored both early goals for Boyle, and Maggie Gnann connected in the 18th minute to make it 3-0.

“I thought that we did a really good job of trying to utilize our speed in some key areas. … We had people in the positions that they’re supposed to be in when we had opportunities to finish, and we were able to finish tonight,” Deem said.

Reagan Britt scored in the closing seconds of the first half, and Burke and Britt added goals in the first four minutes of the second half for Boyle, which has never lost to Lincoln.

Boyle’s defense posted its fourth consecutive shutout and its eighth of the season. Lincoln had only three shots on goal, and two other shots careened off the crossbar.

Boyle outshot Lincoln 18-7 in the first half and 37-12 overall with 24 shots on goal, most of which were kept out of the net by Lincoln goalkeeper Maggie Bowman.

“Give credit to (Coach Lewis) Cummins and his kids. They fought their tails off all night,” Deem said.

Both teams advance to the 12th Region Tournament next week at Southwestern, where Boyle will have the best record in the region.

“We can always get better, but right now we’re in a good spot,” Burke said.

Deem said six-time defending champion West Jessamine will be difficult to dethrone despite a sub-.500 record against a brutal schedule, but he said he also likes where the Lady Rebels are.

“This group is hungry,” he said. “They’re ready to get there and try to compete at the highest level they possibly can as far as they can make it, and I think that’s something that’s going to carry some weight with us down the line.

“I’m excited for next week and I know they are, and we’ll just have to wait and see how that plays out.”