Judge-executive candidates speak on the issues 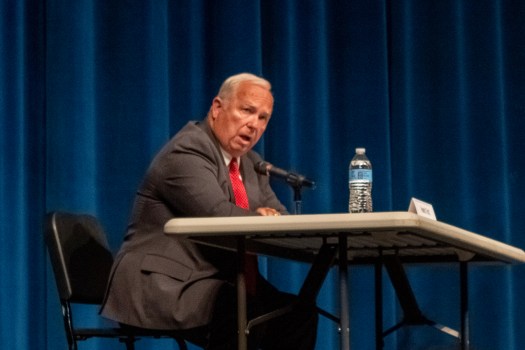 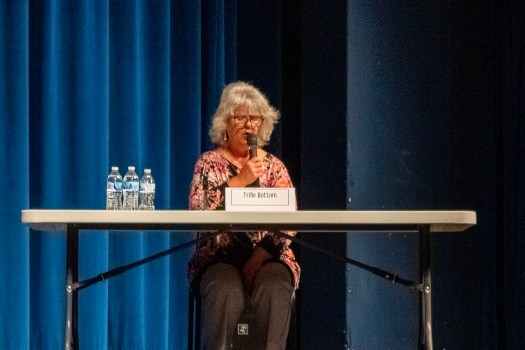 Candidates for Boyle County judge executive answered questions gathered from the public at a forum put on by the Chamber of Commerce last Tuesday.

Bottom has been county clerk for 14 years, and worked in the sheriff’s office for 19 years. She said that if elected, she will always listen to what the citizens want and need.

“As county judge-executive I will provide the level of services that you expect and want in the most cost-efficient way possible. My motto is experience, dedication and trust,” Bottom said. “I’m the most experienced candidate, and have dedicated my entire career to serving you, the people of Boyle County. You know me, whether I’ve collected your taxes in the sheriff’s office, or whether I have collected your vehicle registration in the county clerk’s office.”

Hunt has been the judge-executive for almost four years. He’s a retired Brigadier General from the U.S. Air Force and has a master’s degree in public administration.

Hunt talked about what he’s helped bring to the county, including a 5% sewer rate reduction for Perryville and Junction City, providing money to improve the Parksville water district, and approving funding for school resource officers at all Boyle County school campuses.

“I am a career military person,” Hunt said. “I am a Christian, pro-family, pro-life, second amendment-supporting republican for office.”

One question brought up whether the county should have representation on the Parks and Recreation board, since the county no longer has a board seat after a restructuring several years ago.

Bottom said she would be in favor of having a seat on the board, since the county still gives an annual stipend for parks operations.

Hunt explained that the county does not have a seat because Danville had a different vision for parks. He said the county still has representation on the board’s advisory council, and is content with leaving it as it is, since operating parks is largely a city role.

In response to whether they would support legalizing alcohol sales in the whole county, Hunt said he would support a referendum to let people vote. Alcohol sales are already allowed in Danville, Junction City, and Perryville. Bottom said they should put it on the ballot for the people to vote.

Candidates were asked about their views on allowing large-scale solar farms in the county, since there has been a moratorium here, and other moratoriums on solar farms nationwide.

Bottom said more research needs to be done, as they don’t know the effects solar farms will leave on the land. She said they would have to look at regulations to put the land back to its original use, and would support conducting a study of long term effects.

Hunt has been in many discussions about solar farms since the county enacted the moratorium last year. He has also had a solar lease, which is no longer in effect due to moratoriums. He said it’s an ongoing discussion that cannot be resolved until moratoriums are lifted nationally, and new state laws are passed. He said solar farms will not be on every piece of farm land, as they have to be close to an electric grid.

Another question asked whether the county could be more involved in creating affordable childcare options for working parents.

Hunt said there was a childcare facility on Lebanon Road that five industries supported for their workforce, but they had to close it down because it was too costly. He said although childcare is a need, the county does not need a revenue stream that is a drain on its budget, and doesn’t think the county government should get involved.

Bottom said that for the county to participate in childcare, it would have to be for a nonprofit or public entity in getting funds. She said the county should not start a childcare facility on its own, but could still help through advocacy and funding.

In regards to the placement of more emergency services on the western end of Boyle County, both candidates said there is a need, but they would have to assess the cost-effectiveness of putting more resources where they receive less emergency calls.

Other questions involved the detention center and the need for a new jail facility. Both candidates said there is a need for a new jail, but it’s a matter of coming up with the funding, and getting the best deal for the taxpayers.

To watch the full forum, go to the Hometown Live Radio Youtube page.