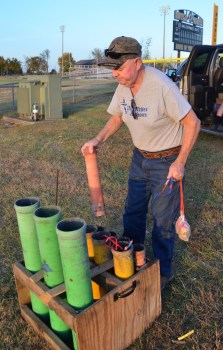 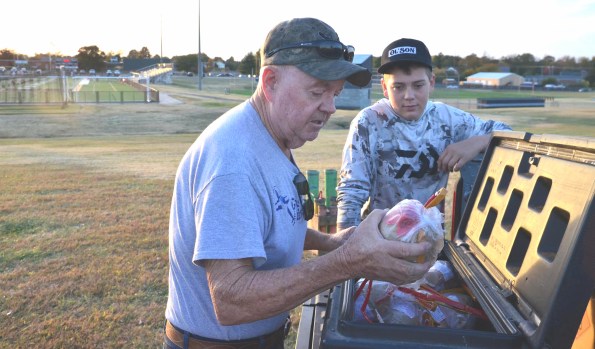 Ernie Holman checks fireworks that will be used during Boyle County’s game against Anderson County on Oct. 14 as his grandson Grant looks on. Photo by Mike Marsee 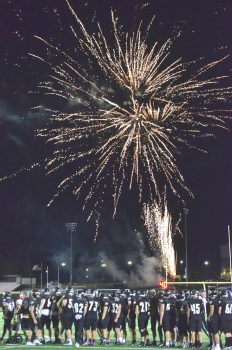 Players and coaches and even pets come and go, but Ernie Holman never runs out of fireworks.

For 30 years, every Boyle County home football game has been punctuated by pyrotechnics that have come to be part of the game day experience at Rebel Stadium.

Holman lit the first fuse long before Boyle became one of the most formidable football programs in the state. He and a small crew of friends and family members have kept the fuse lit for three decades, and they will be at the ready again Friday when the Rebels host Rowan County in the first round of the Class 4A playoffs.

Holman began setting off fireworks at Boyle games when his son, Cory, first took the field as a freshman in 1992, and he had no idea then that he’d still be lighting up fall Friday nights all these years later.

“I just picked something up and ran with it,” Holman said. “And I enjoy (doing it). I have something to look forward to on Friday nights.”

This season marks the 30th anniversary of the fireworks that have exploded over the heads of four head coaches, 10 championship teams, hundreds of players and hundreds of thousands of fans.

“After that first season, everybody kind of expected it,” Cory said. “It’s become a part of Rebel football.”

It’s also a family affair for the Holmans. Cory joined his father years ago in the launching pad between the football and baseball fields after his playing days ended, and Cory’s 13-year-old son, Grant, is now part of the team.

Ernie Holman, who is also a Boyle graduate, provides all the materials on his own dime; the only thing provided by the school is its approval.

“That’s awesome that he’s carried it on as long as he has,” said Boyle athletic director Travis Leffew, who has played and coached under Holman’s blasts. “It’s something they handle, something they take pride in and something our kids really enjoy.”

Cannons and similar noisemakers can be found at many schools, but Leffew said the fireworks make Boyle home games unique.

“I’ve been to a bunch of venues in my time over 20-plus years of playing and coaching football, and I’ve not seen another high school that does it,” he said.

Friday nights at Rebel Stadium are marked by a thunderous three-round volley during the playing of “The Star-Spangled Banner,” a few bursts when the Rebels take the field, a blast every time they score and a grand finale if they win.

In a Facebook post following Boyle’s home opener this season, Cory Holman calculated that in just over 200 home games there had been 2,472 pounds of explosives consumed during the national anthem, 9,600 pounds following Boyle scores and 7,892 pounds after the Rebels’ wins.

That’s nearly 10 tons of fireworks that have, on occasion, elicited complaints from nearby residents.

Cats and dogs and in neighborhoods near the school are not thrilled with all that ordnance, and their owners have made that clear at times over the years.

However, Boyle fans, players and coaches also have made it clear how much they enjoy the fireworks.

“We love that,” Boyle coach Justin Haddix said. “That does make it special. Our kids enjoy it, and that goes into the atmosphere we have.”

“I think it definitely gives a home field advantage,” he said. “I can remember being a player here and looking forward to those fireworks going off, exploding each time we scored.”

Grant Holman, a seventh-grader who plays for Boyle County Middle School, looks forward to the day when the bombs are bursting in air while he’s on the field. Meanwhile, he said he is content helping his father and grandfather, and he said his responsibilities have increased as he has gotten older.

“It’s pretty fun. I’ve been coming up here ever since I was about 5 or so,” he said. “I usually stay up here and watch football games and help him get the rockets out.”

Ernie Holman said he’s still having fun, too, and he gets a bang out of creating a big bang, but he knows what he’s doing. The explosives he handles — which are commercial grade, not the consumer grade products you can buy at roadside stands — and the magazines he uses for firing them are regulated by the Bureau of Alcohol, Tobacco, Firearms and Explosives, and he has a federal explosives license issued by ATF that must be renewed every three years.

He builds much of what he blows up, he makes sure local authorities know when he’ll be shooting them off, and he and his crew — which also includes friend Danny Profitt and has included other friends over the years — keep the area near the fireworks zone clear of people and vehicles.

Holman and his family host an annual fireworks display on the Sunday before Independence Day at his farm near Perryville, and he also has displays at Boyle following graduation each year and to welcome home football teams that win state championships.

His crew has become a fixture on the slope some 75 yards beyond the east end zone, where the view of the game isn’t great but a radio helps him follow the action.

“We have shot ‘em and there was a flag discovered, but that just spurs them on to do it again,” Ernie Holman said.

Boyle scored 30 touchdowns and two field goals in six regular-season home games, and the Rebels could host as many as three playoff games. Ernie Holman said if all the fireworks that are used in a typical season were packaged together, it would last about 20 minutes.

Instead, the blasts go up one touchdown at a time, one victory at a time, continuing one of the area’s most recognizable football traditions.

“It’s almost a hobby that got out of control, and now we can’t stop,” Cory Holman said. “It’s a part of Rebel football, and that’s a part of who we are. We’ll try to keep it going as long as we’re allowed to.”