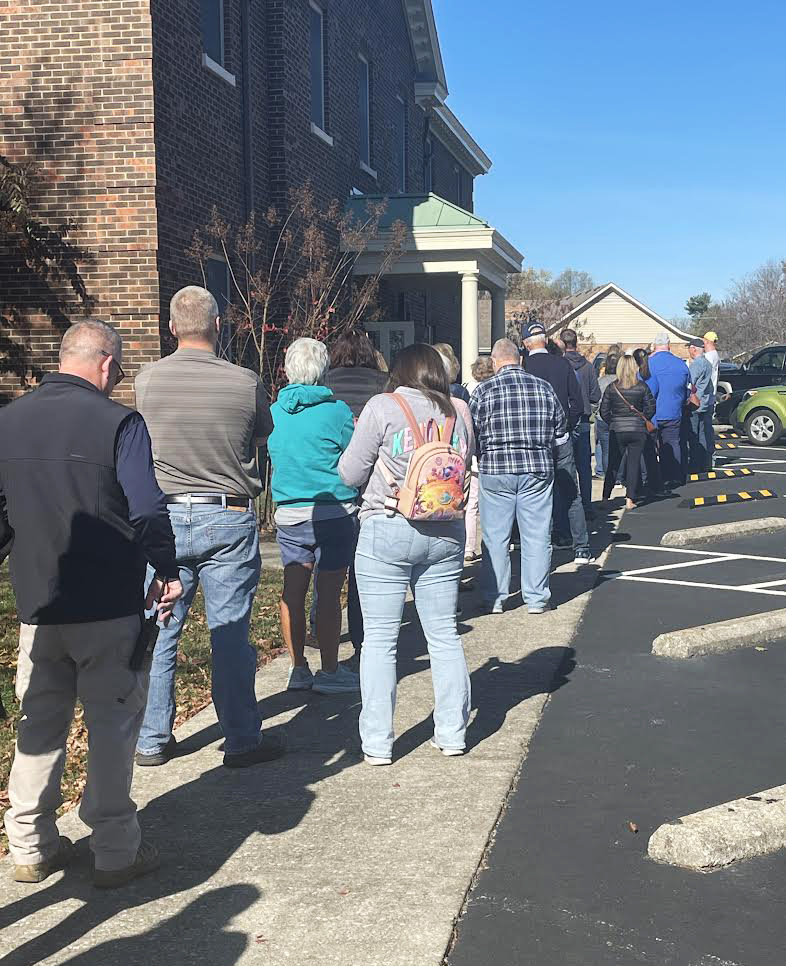 Large turnout, illustrated by this line of voters at First Christian Church, and open voting centers throughout the county contributed to a few snags on Election Day. Photo by John Reitman

With voting underway, there have been reports of voting centers running out of ballots. Although the county has enough ballots for every voter, the county clerk’s office said some voting centers, such as the fire station and the First Christian Church, experienced larger-than-expected turnout.

Making it difficult to plan, said County Clerk Trille Bottom, is that voters can cast a ballot in any voting location in the county.

“We have enough ballots, but it’s hard to determine where people are going to vote,” said Bottom, who also is on the ballot as a candidate for County Judge-Executive. “It’s not feasible to have 100 percent off all possible ballots at each center due to the cost. We just didn’t get the information to respond in a timely manner.”

Bottom explained that at locations that ran out of pen and paper ballots there was still an option to vote via Verity Duo machines, although the process take longer to use than traditional ballots. Although these machines use a digital interface, they produce a paper ballot with a voter’s choices.

Some voters have voiced complaints that the voting process is taking too long and that they are unable to vote. Junction City resident and veteran Robby Hendrickson was unable to cast his vote at the Junction City Baptist Church.

“I got there at 6 (a.m.) and was one of the first in line, and they didn’t have a ballot for me,” Hendrickson said.

Although he was given the option of voting via machine, he still was unable to cast his vote.

“Me and another handful of people were the only people in the whole place that had to use an electronic ballet,” Hendrickson said. “Everybody else was using paper. Then when it was time to supposedly vote they ‘forgot’ which precinct I was in to plug into the machine and had to call the clerk’s office, and they pretty much told the lady who was helping me that there was nothing they could do at this time.”

Hendrickson left without voting because, he said, he had to go to work. He was told that once he left he would be unable to return and cast his vote.

Many voters at the Inter County Energy Coop reported a more positive experience. Johnathan Crowley and Beverley Wolfe both voted there and reported that the process took less than 10 minutes and they were both given paper ballots.

Stephen Voss, Ph.D., associate professor of political science at the University of Kentucky, said that voting centers have been shown to make voting easier than traditional precincts. One example he cited is that allowing people to vote at a center of their choosing means they can go to a location near their place of work, or child’s school. Despite their benefits, he said that some difficulty is to be expected during the first election using centers.

“Things like figuring out how many ballots you need are kinks that can be worked out with experience,” Voss said. “Once you are able to observe demand at different voting centers you can adjust based on how competitive a particular election is. Any transition is going to be noisy.”