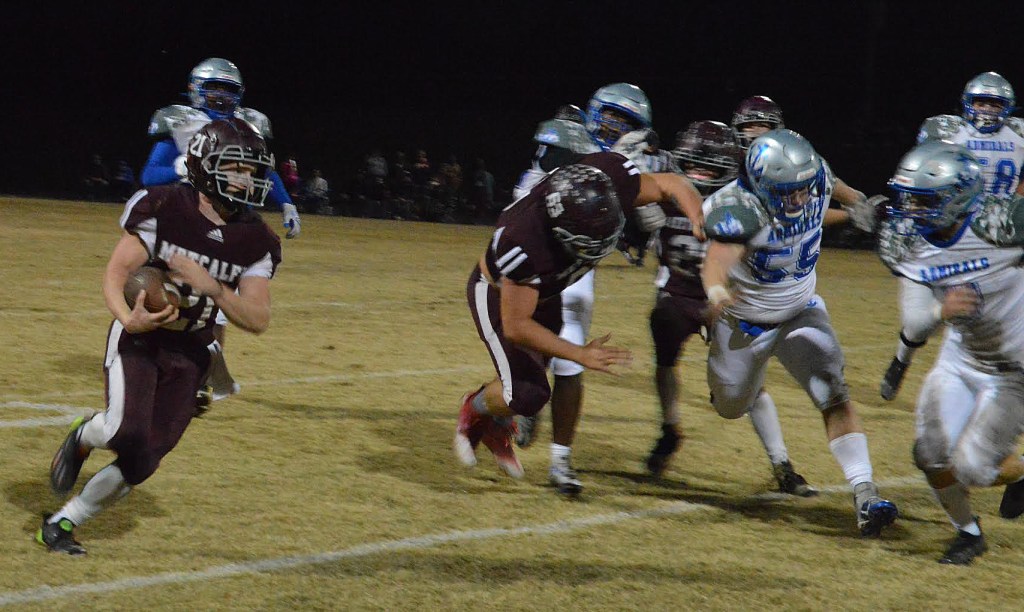 A host of Danville defenders close in on Metcalfe County’s Mikey Bennett. Photo by Isabella Murray

EDMONTON — The Danville Admirals’ hopes of playing in a regional championship game sank beneath the waves.

Metcalfe County brought Danville’s season to a close Friday night, eliminating the Admirals with a 21-14 victory in the second round of the Class 2A playoffs at Hornet Field.

Danville saw its season end in the second round for the second consecutive year after Metcalfe made the big plays in the final six minutes to extend its undefeated campaign.

“We knew it was going to be a very tough football game. I thought we were both pretty evenly matched and it would just come down to some mistakes, and they made just a few fewer than we did,” Danville coach Mark Peach said.

Danville (5-7) answered Metcalfe’s first two touchdowns but was unable to do so after the Hornets scored a tiebreaking touchdown with 4:21 remaining.

The Admirals drove to the Metcalfe 35-yard line before the Hornets’ Luke Meadows recovered a fumble with 5:09 to play, and Mikey Bennett scored on a 5-yard run with 4:21 to snap a 14-all tie.

Wyatt Blythe then recovered an onside kick for Metcalfe (12-0), which attempted to run out the clock. The Hornets turned the ball over on downs at the Danville 24-yard line with 54 seconds left.

The Admirals, who had no timeouts remaining, got as far as the Metcalfe 22, where Demauriah Brown was tackled as time expired.

“That’s a heck of a battle, that’s a heck of a high school football game,” Metcalfe coach Fred Harbison said. “Hats off to Danville, they came, showed up and played, and that’s an exciting game. But I just love our guys, love our team. They executed tonight and made the plays when we needed to.”

Danville was held to 218 yards, less than half of what it had in each of its last two games, on a field softened by rain earlier in the day, while Metcalfe had 289 yards.

Brown rushed for 151 yards and one touchdown on 20 carries for the Admirals, giving him 1,971 rushing yards and 28 rushing touchdowns on the season. He threw for 53 yards and finished the season with a combined total of 2,318 rushing, passing and receiving yards and 31 touchdowns scored.

Metcalfe scored less than two minutes into the game on Mason Estes’ 42-yard touchdown pass to Blythe, and Danville pulled within 7-6 early in the second quarter on a 6-yard run by Brown.

Bennett, who had 156 rushing yards, and Estes worked to push the ball to the Danville 10 on the Hornets’ next possession, and Blythe ran in from there to give them a 14-6 halftime lead.

Danville tied the game early in the second half on Trumbo’s touchdown catch and a two-point conversion run by Brown.

That was the last score for the Admirals, who overcame a 2-4 start to win two of three district games and a first-round playoff game.

“The season did not get off to a good start, but we got on a roll there in district play and won a playoff game,” Peach said. “This was the No. 4 team in the state of Kentucky, they were 11-0 and we were right there and had a chance to win. I’m disappointed with the outcome, but not disappointed with our guys, their effort and everything they did, particularly the second half of this season.”