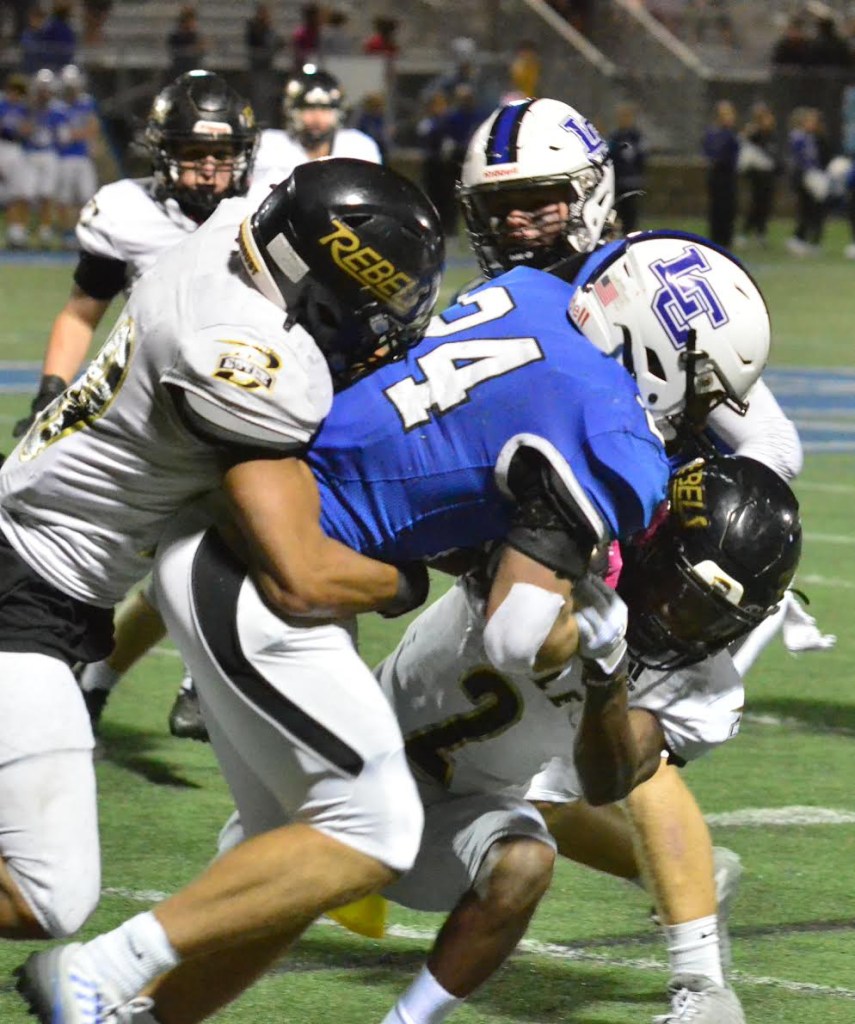 Boyle County defenders Brock Driver, left, and Sage Dawson tackle Lexington Catholic’s Walker Hall during the second quarter of their game on Oct. 7. The two teams will meet in a rematch Friday in the quarterfinals of the Class 4A playoffs at Boyle County. Photo by Mike Marsee

In a sport in which teams often brood over an agonizing loss for a year, Boyle County and Lexington Catholic seldom have to wait that long.

For the fourth consecutive season and the 15th time in their 20 years as district rivals, the Rebels and Knights will meet for the second time in the same season. And for the first time in a long time, Boyle will be the team looking for retribution.

Forty-two days after its first loss to LexCath in six years — and a particularly painful loss at that — Boyle will look to turn the tables in the latest in a long line of elimination games between the teams Friday at Rebel Stadium.

“A lot of times you have to wait a year to get to play somebody again. We only have to wait five or six weeks,” Boyle coach Justin Haddix said.

It’s surely safe to say that the Rebels are itching for this rematch after the Knights rallied for a 28-27 victory Oct. 7 in Lexington, but Haddix downplayed any desire for vengeance in Friday’s Class 4A regional final.

“We’re excited about getting to play. We don’t care who we play,” he said. “Obviously, when it’s Catholic it means a little bit more here, and it should. Our guys should be fired up, and they’re going to be fired up.”

Haddix said the Rebels learned a valuable lesson in that game that they intend to apply if they are leading again.

“Obviously, we’ve got to finish,” he said. “I felt like we didn’t finish. We had some opportunities to finish, and we didn’t make the most of them.”

He said he believes Boyle is a better football team now than it was then.

“You should be. You want to be playing your best in the playoffs,” Haddix said. “We’re playing better now, we’re more confident in what we do. We’ve just got to go prove it, though.

Both teams have lost once since their first meeting: Boyle to Frederick Douglass and LexCath to Scott County in the final week of the regular season.

Boyle’s opponents’ winning percentage allowed the Rebels to edge the Knights by .00048 points in the final KHSAA RPI standings, which is why their rematch will be played in Danville rather than Lexington.

“Everybody complained about (intradistrict games in the first and second rounds of the playoffs) the two previous years. We were playing Lexington Catholic in the second round and they were the second-best team in 4A based on RPI. Now we didn’t play that way and now we get the game at home. That’s why we schedule great teams in the regular season,” Haddix said.

Haddix said he feels the Rebels are a better team at home, as most teams are.

“When you’re at home you’re not dealing with travel distractions. We’ve got a great fan base at home, we’ve got all the things we enjoy and like, and we feel like that will help us,” he said.

Both teams have dealt with injuries to key players in recent weeks.

Boyle quarterback Sage Dawson (1,404 yards, 20 TDs) has missed the past two games but was dressed last week at Boyd County, and Haddix said he could return Friday.

“We’ll see how he practices this week. We’re not going to put a kid out there if he’s not playing his best and able to play at the highest level,” Haddix said.

Avery Bodner, who suffered an injury in the LexCath game that cost him two games, has thrown for 260 yards and three touchdowns in three games for Boyle. LexCath’s Jackson Wasik, the top passer in Class 4A, has thrown for 2,667 yards and 38 TDs.

In each of the 14 instances in which Boyle and LexCath have played twice in the same season, the team that won the regular-season game also won the postseason game. The Rebels, who lead the series 21-14 overall, have done so nine times, the Knights five times.

With Boyle at No. 2 and LexCath at No. 3 in the RPI standings, the winner of Friday’s game is assured of hosting a semifinal next week as one of the two highest-rated teams remaining in 4A.