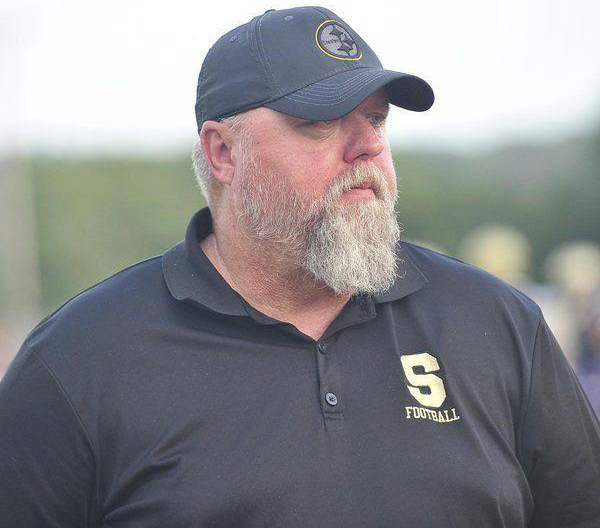 Those who knew Robbie Lucas remember him as a successful coach, who also made an impression off the football field.

Lucas, a former Lincoln County football player and coach who led Somerset to a state championship in 2019, died Sunday. He was 50.

Lucas, who coached at Lincoln in 2002 and ’03 and was Somerset’s head coach for the past 14 seasons, died of cancer, according to WPBK-FM of Stanford.

“He was a great coach and an even better person,” said Tim Estes, who was on the Lincoln coaching staff for three of Lucas’ four years as a player there and remained friends with him. “It’s just a shock to all of us.”

Lucas died two days after Somerset’s season ended with a loss in the second round of the Class 2A playoffs. He was not at that game, but he attended as many games and practices as possible as his health deteriorated, often watching from his pickup truck parked just outside the field.

Lucas, who continued to live in Lincoln County after leaving his alma mater, led Somerset to the Class 2A championship in 2019, the school’s only KHSAA football championship.

“I called him to say congratulations after they won … and he said, ‘I didn’t make a play there,’” said Boyle County coach Justin Haddix, who became friends with Lucas through a chance meeting at a coaches’ clinic in 2010. “You’re in it for your players and it’s about their experience, and I felt like he was great with that.”

Lights were turned on at high school football fields across Kentucky on Monday night in memory of Lucas, including at Lincoln, Boyle, Danville and Garrard County.

At Lincoln, a red jersey bearing No. 62 — Lucas’ number from his playing days — and a helmet were displayed on a goalpost while the field was illuminated.

“62. On the field where you played and coached. Toughness & passion, wearing this number on this field and later coaching along that sideline … then building so many other young men @BJNFBALL in stride with a legacy that will live forever. We (heart) you, Coach Lucas,” Lincoln coach Josh Jaggers tweeted.

Lucas played at Lincoln from 1986-89 and graduated from the school in 1990, then played at Cumberland College.

“He’s probably one of the first kids that I met in 1987 when I came on the staff with (head coach) Larry Phillips. He was a backup on the ’88 team on the (offensive) line and he was the starter at center the next year,” Estes said. “He was just a gutsy football player who always seemed to have a nose for the ball.

“I knew he was going to go on and do great things, and he did.”

He spent 25 seasons with the Somerset program, with two stints as an assistant coach before he became the Briar Jumpers’ head coach in 2009.

“The Somerset Independent School System and the entire Somerset Community mourn the passing of Coach Robbie Lucas,” Somerset Independent Schools superintendent Kyle Lively said in a statement. “He was an outstanding football coach, an excellent teacher, and an even better person. Coach Lucas always put others before himself and made countless sacrifices for the betterment of his players, coaches, and students. The positive impact Robbie made on everyone around him is immeasurable and will span for decades to come through the success of his players and students. The world lost a great football coach and a fantastic man. Coach Lucas will be greatly missed. Our thoughts and prayers are with his wife Nicole, his daughters Molly, and Maddie as well as his entire family.”

Lucas joined the Somerset staff in 1996 and left after the 2001 season to succeed Estes as head coach at Lincoln. He went 4-16 in two years with the Patriots, then returned to Somerset as an assistant coach.

He was named interim head coach at Somerset shortly before the start of the 2009 season after his players lobbied for him, then was named head coach after a 14-1 season that ended in the Class 3A finals.

It was during that offseason when Haddix, then a 25-year-old rookie head coach at Perry County Central, found a seat next to Lucas in the back of the room at a coaches’ clinic in Danville.

“We start talking, and I’m just kind of catching my bearings on what to do. He offered to help me with anything I needed, scheduling, whatever. He sent me anything I asked for,” Haddix said. “Here he is helping a young coach that just wanted to be good.”

“We’d text almost every Friday and say good luck. We had a great relationship. He was just a great man, and he loved kids.”

Estes said Lucas was constantly working to improve as a coach just as he had as a player.

“He made an impression on me as a player because of his work ethic. He probably wasn’t one of the most talented kids but he worked harder, and I would say that same work ethic applied to everything he did in his life,” Estes said.

“I think that just goes to show the kind of individual he is. Robbie was probably not the most boisterous and loud; he was kind of unassuming. But when you met Robbie, you got the real deal.”

Both Estes and Haddix said Estes will be remembered for his influence on the lives of his players both on and off the gridiron.

“That kind of stuff never makes the newspapers,” Haddix said. “It’s all about wins and losses, but realistically it’s about having great young men and learning and having a great time.”

“It shows the positive impact that coaches can have on young people today,” Estes said. “In a world where there are so many broken families, that coach might be someone who spends more time with them than their family does.

“When you know that there are coaches who are making a difference in kids’ lives, it makes it worth it.”