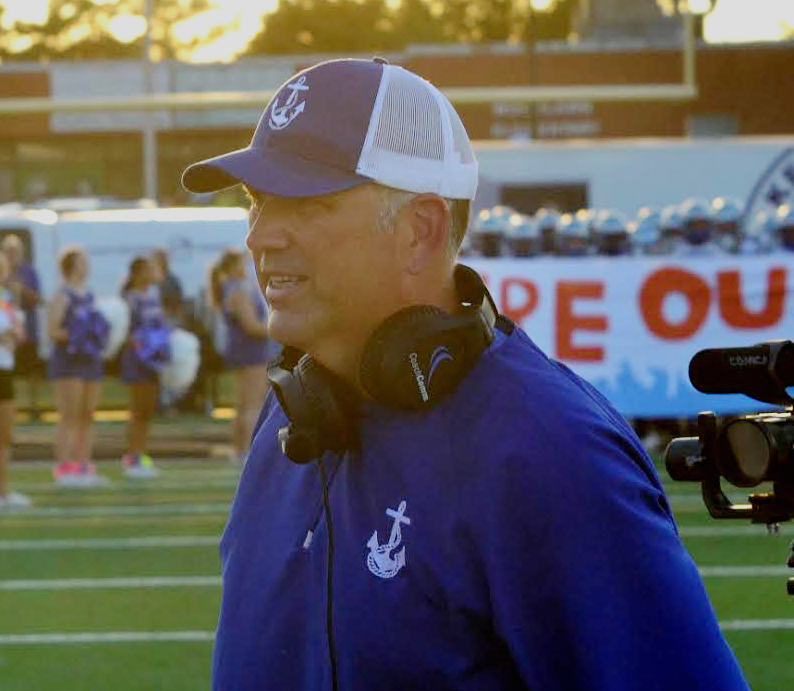 Mark Peach says the time is right to move on.

Peach resigned as Danville football coach Monday after two years at the school.

He stepped down three days after the Admirals’ season ended.

“I’ve been praying about it, and I feel like this is what’s best at this time,” Peach said. “I wasn’t pressured or anything. I just came to this conclusion over the weekend.”

“We sat down and Coach had made his mind up what he wanted to do moving forward, and I basically listened. There wasn’t a lot of discourse,” Luhman said. “He had really thought long and hard about his decision and was ready for a new challenge.”

Peach said it is the right time for him and it will give the school ample time to find a new coach.

“Everything in life is about timing, and I thought, ‘This is the time, and if you feel this way, let’s move forward,’ ” he said.

Peach remains on the faculty at Danville, and he is working with interim athletic director C.J. Lynn on scheduling and inventory and with his assistant coaches on the team’s postseason banquet, according to a statement from the district.

Meanwhile, Luhman said the school’s goal is to have a new coach in place before Christmas break begins Dec. 17.

Danville went 13-11 in Peach’s two seasons at the helm, reaching the second round of the Class 2A playoffs in both years.

The Admirals finished 5-7 this season after their loss to Metcalfe County last Friday. Injuries and attrition depleted their ranks as the season went on, and Peach said he was proud of what they accomplished.

“I’m really proud of this senior class. We had a lot of adversity we went through, and somehow we were district runner-up and won a playoff game,” Peach said. “I’m just really proud of the guys, and I want to thank our staff and all of the coaches who coached with us the last two years.”

“Every job has its own unique set of challenges,” Peach said. “We were able to be district runner-up back to back, and I feel like we did some good things while we were here.”

Peach’s tenure is the shortest tenure for a Danville coach in 70 years. Pat James led the Admirals to a 7-2-1 record in 1952, his only season as head coach.

Peach came to Danville after one season at Trigg County, and he previously was head coach at Anderson County, Paul Dunbar, Hancock County and Campbellsville University.

His career record is 166-98 in 22 high school seasons with two appearances in the state finals, and he was 15-7 in two collegiate seasons.

“I’m counting this time as a blessing from God that I got to come to a great town like Danville and work at a great school and coach some great kids,” Peach said.

“I want to thank everybody here at Danville,” he said. “I just appreciate getting the chance to work for some great people, and the players that I got to coach here.”

“We think the world of Coach Peach. He’s a kind man, he is someone that is very caring, and we wish him the best,” Luhman said.

Peach said he isn’t sure what his next move will be. He is in his 27th year in education, making him eligible to retire when that year is completed, but he said he doesn’t know whether he will.

“I have no future plans. I don’t know if I want to retire, be a head coach, be an assistant, coach in high school, public, private, college or work in ministry,” he said. “All I can do is pray about it and put it in God’s hands.”

Luhman said he is forming a committee to consider Peach’s replacement that will include people inside and outside the school.

“We’ll have administrators and our athletic director, and we’ll want community members, people that are involved with our youth league, with our middle school program, community members who have been a part of the Danville school community that can give a unique perspective,” he said.

He said players will have input as well, noting that school and district leaders have placed a priority on student voice in strategic planning sessions.

“Their perspective just provides an insight into how to build relationships, the way they want to be pushed and the best way to push them to their potential. That’s extremely valuable to us,” Luhman said. “We want those football players’ insights on what qualities and characteristics they’d want in the next football coach.”

Luhman said he thinks the job will attract considerable interest.

“It’s Danville football. You’re in Title Town. That’s going to draw the interest of a lot of people,” he said. “We’re very proud of our storied tradition, and (how that) will allow us to get quality applicants and find the right fit that will take us to the next chapter.

Luhman said the standard will remain high for the program, which has had three losing seasons and hasn’t appeared in a regional final since winning the Class 2A championship in 2017.