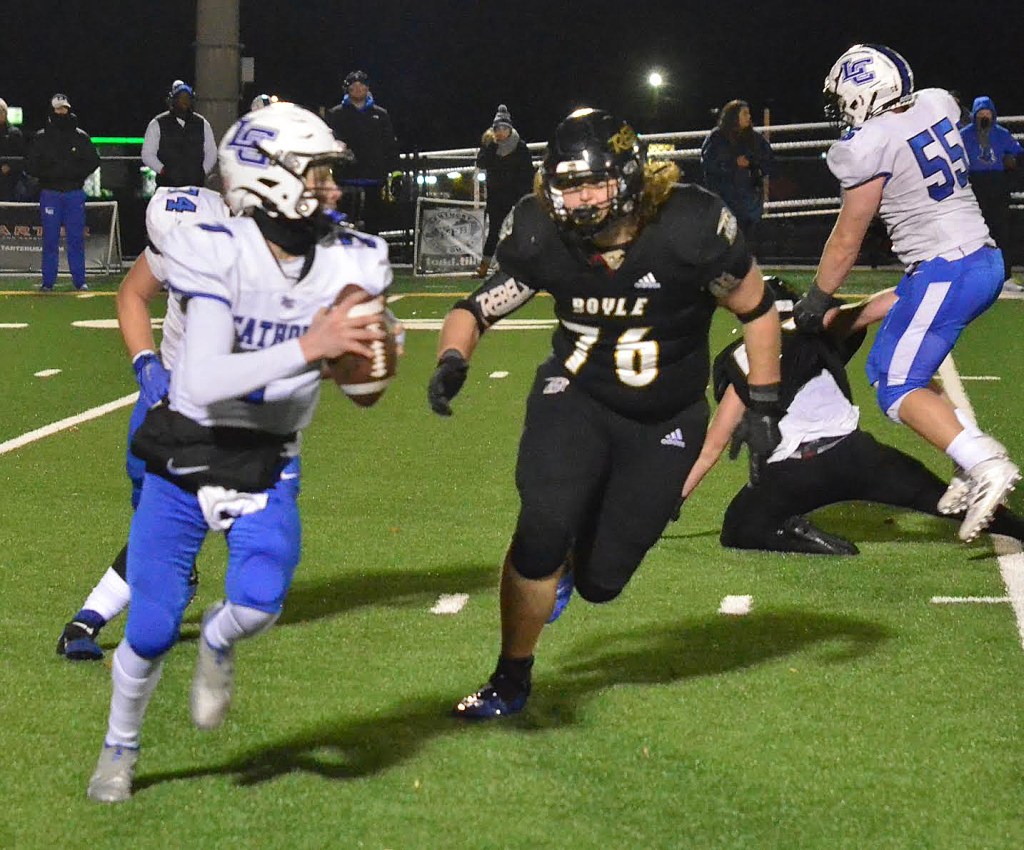 on Turpin (76) of Boyle County chases Lexington Catholic quarterback Jackson Wasik out of the pocket during the fourth quarter Friday. Lex Cath had the ball for less than 4 minutes in the second half as Boyle County advanced to the state semifinals. Photo by Mike Marsee

This was the one that didn’t get away.

Boyle County had a firm grip on a game with Lexington Catholic for the second time in six weeks, and this time the Rebels had no intention of letting go of the lead — or the football.

Boyle held the ball for 85 percent of the second half Friday night, imposing its will and extending its lead en route to a 41-21 victory in a Class 4A regional final at Rebel Stadium.

The Rebels were eager to avenge a loss at LexCath six weeks earlier, and they did so by controlling the game with a powerful rushing attack.

“I think we all just came with energy, wanted to get back at them, and we didn’t give up,” Boyle quarterback Sage Dawson said. “Last game we got a little conservative; this time we just punched all the way through.”

Dawson returned as the Rebels’ quarterback after missing two games with an injury, and he, Avery Bodner and Montavin Quisenberry teamed up to push the ball down the field time after time behind an offensive line that kept opening holes.

“It’s awesome when you can line up between the tackle box and run the ball, and they know you’re running the ball and they can’t do anything to stop it,” Boyle offensive lineman Andrew Hardwick said. “Then, too, it takes the ball away from their offense and keeps our defense off the field and gives us a great advantage to be able to control the clock.”

Boyle coach Justin Haddix’s first words when he took the field with the captains for the pregame coin toss were, “Lock the gate!” and LexCath had nowhere to hide from a physical Boyle offense.

“When they shut the gate, there’s no leaving,” Hardwick said. “Once it gets going, they’re here, they’ve got to play us.”

Bodner ran for 185 yards and three touchdowns, Quisenberry ran for 102 yards and took a shovel pass 59 yards for a touchdown and Dawson ran for 65 yards.

“We wore ’em down,” Haddix said. “I felt like our offensive line did a great job, our backs hit it. … And we made some plays in the passing game, too, and I think we can continue to show some things there.”

Boyle advanced to the semifinals for the sixth consecutive year. The Rebels will host Central (9-4), a 61-19 winner over Logan County, on Friday for a berth in the state finals.

As if Boyle needed more motivation for another in a long series of elimination games against LexCath, the Rebels were still smarting from the Oct. 7 game in Lexington in which the Knights rallied with 21 unanswered points in the fourth quarter for a 28-27 win.

“We had a little extra juice to us, when it’s Lexington Catholic, it’s win or go home and all the things that were on the table,” Haddix said. “We had a great week of practice, I’ll say that. There weren’t a whole lot of speeches. Usually we give them some rah-rah speeches, (but) they didn’t need much today.”

The stands were only about half full on a night when the temperature hovered in the high 20s, but there was still a charged atmosphere surrounding the latest game between these longtime district rivals.

It was the 15th time in the past 25 years that Boyle and LexCath faced off twice in the same season, but this was the first time that the team that won the regular-season meeting lost the postseason rematch.

Boyle, which holds a 22-14 lead in the series, put the game on ice by keeping LexCath’s offense off the field. The Rebels possessed the ball for 35:39 of 48 minutes, including 20:22 in the second half — leaving just 3:38 for the Knights.

“We wanted to come out and be physical and make it a physical game,” Haddix said.

And their most effective drive of the night might have been one that didn’t result in a touchdown.

LexCath (10-3) scored on the first play of the second half, pulling within 24-14 on the second TD pass of the game from Jackson Wasik to Hunter Foster.

The Knights’ next series ended with a punt, and Boyle drove 59 yards in 15 plays, taking 7:22 off the clock before Cole Andrews kicked a 26-yard field goal — his second field goal of the night — with three seconds left in the third quarter.

Less than two minutes later, Quisenberry recovered a LexCath fumble four plays later at the Boyle 41-yard line. On third-and-10, he scored on the shovel pass to give the Rebels a 34-14 lead.

Dawson then recovered an onside kick, and Boyle drove 47 yards for Bodner’s third rushing touchdown, taking a 41-14 lead with 5:59 remaining.

Quisenberry had 206 yards of total offense, and Dawson completed four of 10 passes for 122 yards.

Dawson, who suffered a knee sprain Oct. 28 in Boyle’s loss to Frederick Douglass, had been cleared to return the day before the Rebels’ second-round game at Boyd County. On Friday, he took the snap on 67 of Boyle’s 75 plays, including all but one in the second half, and he also played on defense in the secondary.

The Rebels’ defense held LexCath to 22 rushing yards, though Wasik threw for 287 yards.