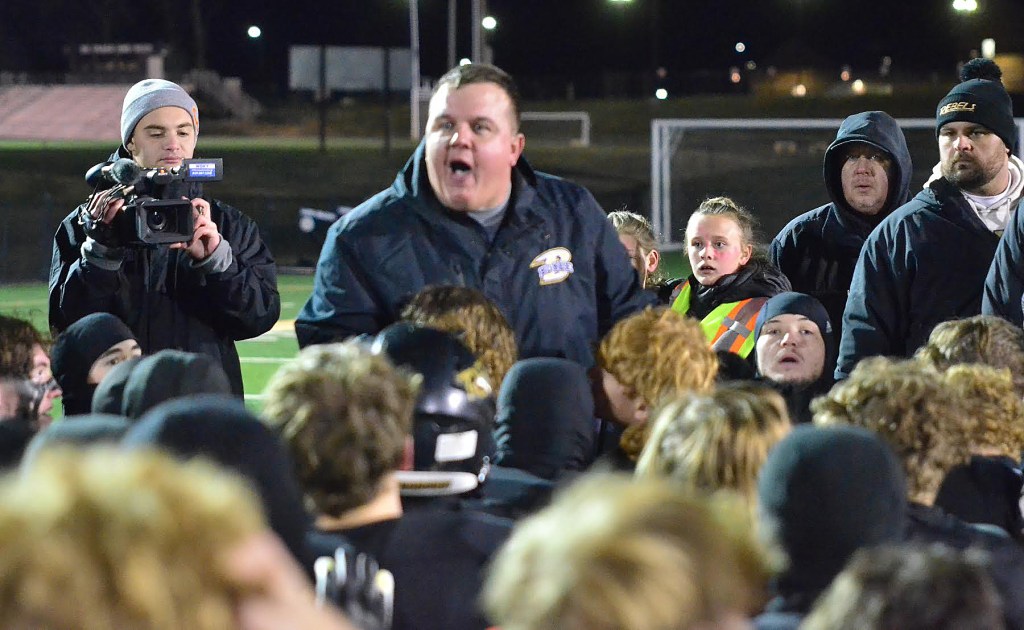 Boyle County coach Justin Haddix and the Rebels will play Central on Friday in the state playoff semifinals. The winner will play in the state championship next week at UK. Photo by Mike Marsee

Hungry for a little Thanksgiving football? The Boyle County Rebels are hungry, too.

Practicing on Thanksgiving for a playoff game the next day has become a regular ritual at Boyle, but it hasn’t become old hat.

The Rebels will be at work Thursday, and they have invited their fans to join them for the final practice before they face Central on Friday in a Class 4A semifinal at Rebel Stadium. Coach Justin Haddix said he and his players should count as one of their blessings the chance to spend part of their holiday at practice.

“We’re blessed with the pressure to do it,” Haddix said. “I think it’s a blessing to be at a place where you expect to win, and you’ve got to enjoy that part of it if you’re an athlete and a competitor.”

This will be Boyle’s sixth consecutive appearance in the semifinals, which are usually played on Thanksgiving weekend, and its 16th overall. Friday’s game at Rebel Stadium will be one of only 12 played across the state.

“We don’t take any of that stuff for granted,” Haddix said.

Nor will Boyle (11-2) lose sight of the task at hand, even with a fourth consecutive trip to the state finals just one win away. Haddix said the singular focus is Central (9-4),

“We’re focused on what we’ve got to do. We’re not looking at anything else,” Haddix said.

Like the Rebels, the Yellow Jackets have become regular participants in semifinal games, though this is their first since 2019, when they dropped a 31-14 decision to Boyle at Rebel Stadium.

Central has won seven straight games after a 2-4 start, outscoring its opponents by an average score of 43-4 in the six contested games. (One win was by forfeit.)

Early-season losses to duPont Manual, St. Xavier, Belfry and South Warren were part of a typically tough Central schedule, but the Jackets bounced back to shut out all four of their District 4A-4 opponents.

Haddix said the Jackets’ second-half surge has been sparked by two things that are typically valuable assets in the postseason.

“They play really good defense and they’ve got a really good running back,” Haddix said. “That’s a recipe for success in the playoffs, when you can run the ball and play defense.”

“They’re bringing a lot of pressure … and they do a lot of things,” Haddix said of the Central defense. “They’ve got good linebackers, and they’ve got a good defensive line that keeps people off of them.”

The Jackets’ offense revolves around sophomore Cortez Stone, who is ranked No. 1 in 4A and No. 2 overall in rushing with 2,123 yards and 25 touchdowns.

They have gotten more than three-quarters of their offensive yardage — 296 yards per game — on the ground. Quarterback Xavier Brown has thrown for 781 yards and eight TDs.

Boyle averages 216 rushing yards and 151 passing yards per game, and its offense got a boost last week with the return of quarterback Sage Dawson (1,527 yards, 21 TDs), who missed the Rebels’ first two playoff games with a knee injury.

Haddix said Dawson showed no ill effects following his return to action last week in Boyle’s win over Lexington Catholic, even after he was struck by a helmet on his previously uninjured knee. And while Dawson took 90 percent of the snaps, Haddix said it’s likely that Avery Bodner and perhaps Montavin Quisenberry will continue to take some snaps.

“It keeps people on their toes,” he said. “I’ll use every advantage I can.”

Defensive end Tommy Ziesmer, who leads Boyle in sacks (seven) and tackles for loss (18) limped off the field late in Friday’s game after getting cleated, but Haddix said there were no lasting effects from that injury.

Boyle and Central have met six times in the playoffs, all since 2001, and the Rebels have won four times.

The teams have 16 state championships between them, all since 1999. While Boyle is striving for its third consecutive Class 4A title, Central is seeking its first title since 2018, when it defeated Haddix’s Corbin team in the 3A finals.

Before the Rebels take the field Friday, they will hold an open practice at 6 p.m. Thursday.

It’s the first time in Haddix’s three seasons at Boyle that the Rebels will hold a truly open Thanksgiving practice. That wasn’t possible in 2020 at the height of the Covid-19 pandemic, and last year the team practiced on Thursday morning.

Haddix said all fans are welcome — hot chocolate and apple cider will be served — and former Boyle players are particularly encouraged to attend.

And the players are still happy for the chance to practice on Thanksgiving.

“Not a whole lot of teams are playing on Thanksgiving. They’re out eating with their families,” Dawson said. “It’s beautiful.”