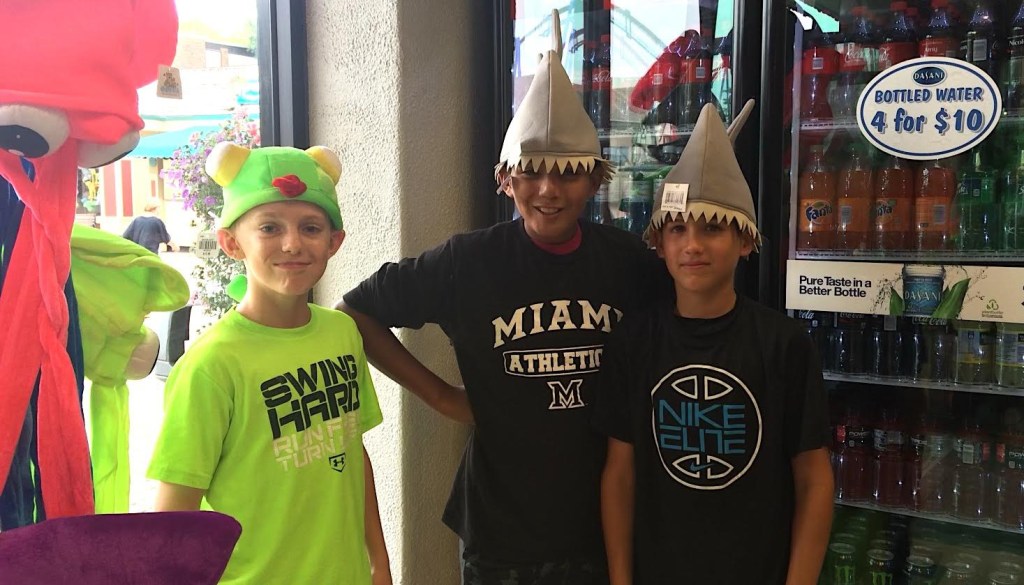 This group of childhood friends grew to become successful atheltes. From left, Turner Buttry, Dane Key and Reed Sheppard during a childhood trip to Kings Island amusement park near Cincinnati. Buttry currently is a freshman on the EKU basketball team, Key is a standout wide receiver on the UK football team and Sheppard recently signed to play basketball for the Wildcats. Photo courtesy of Jeff Sheppard

Dane Key of Lexington has already made his presence felt in a big way on the University of Kentucky football team.

However, while they will be playing different sports at Kentucky, the two Kentuckians started playing against each other at an early age.

“I have known Dane since about third grade. Growing up we used to play against each other. We played baseball and basketball against each other. One of our friends, Turner Buttry, is now at Eastern Kentucky playing basketball,” Reed Sheppard said. “Us three used to hang out. I got a few pictures of us together at Kings Island and at Turner’s house just hanging out. Dane was one of my good friends.”

Reed’s mother, Stacey, remembers her son playing baseball for the Bombers out of London and Key playing for the Mudcats out of Richmond.

“Dane was an incredible first baseman. He could hit and run,” Stacey said.

“It was a rivalry in baseball and then Turner and Reed started playing basketball together for me,” Jeff Sheppard said. “We kind of met Dane and I already knew Dane’s dad, Donte, who played football at Kentucky when I was there. We just kind of re-connected.

“Dane was a great baseball player and a great basketball player, too, because he was so long, athletic and fast. He wasn’t really highly skilled in basketball but with his length and everything he was awesome.”

Stacey and Jeff Sheppard both played basketball at UK where they met. Jeff was 1998 Final Four MVP when Kentucky won the national championship and Stacey was a standout for the women’s team.

“We were all at UK at the same time and Donte and I have remained good friends,” Stacey said. “Dane and Reed just kind of grew up together. Now that Reed is also going to Kentucky, it’s going to be so neat to watch them and how they have grown up.”

Reed and his parents went to a UK football game and ran into Donte Key at Kroger Field.

“He came up and gave me a big hug and we took a picture,” Reed said. “It was really cool to see Dane’s mom and dad for the first time in a little bit. I am really looking forward to being up there at Kentucky with Dane and being able to hang out with him and start talking to him again.”

Reed admits Dane was a better baseball player than him.

“He was on first base and nothing would get by him. You think it was and then he would do the splits and reach out and get the ball. He was so fast, and is still so fast, you could never get him out, either,” Reed said. “Dane is a super good athlete and always has been.”

In basketball, Reed’s team usually won even though he said Key was a force to play against.

“He was super fast and skilled in everything he does and was very good in basketball but I generally had him in basketball,” Reed said.

Reed says the two did talk a “little bit” about him also trying football.

“But once he got up in Lexington and was playing, there was no chance I was going to go up there and play against those dudes. They are the real deal at Frederick Douglass,” Reed said.

Both will be the “real deal” at UK, too, as Key has already shown this season.

“When I am watching football games, all I am doing is like, ‘Throw it to Dane.’ He is really good,” Jeff Sheppard said. “It’s so much fun seeing what he’s doing after knowing him, and his father, for so long and now Reed gets to be up there at UK. It’s all pretty special.”Email