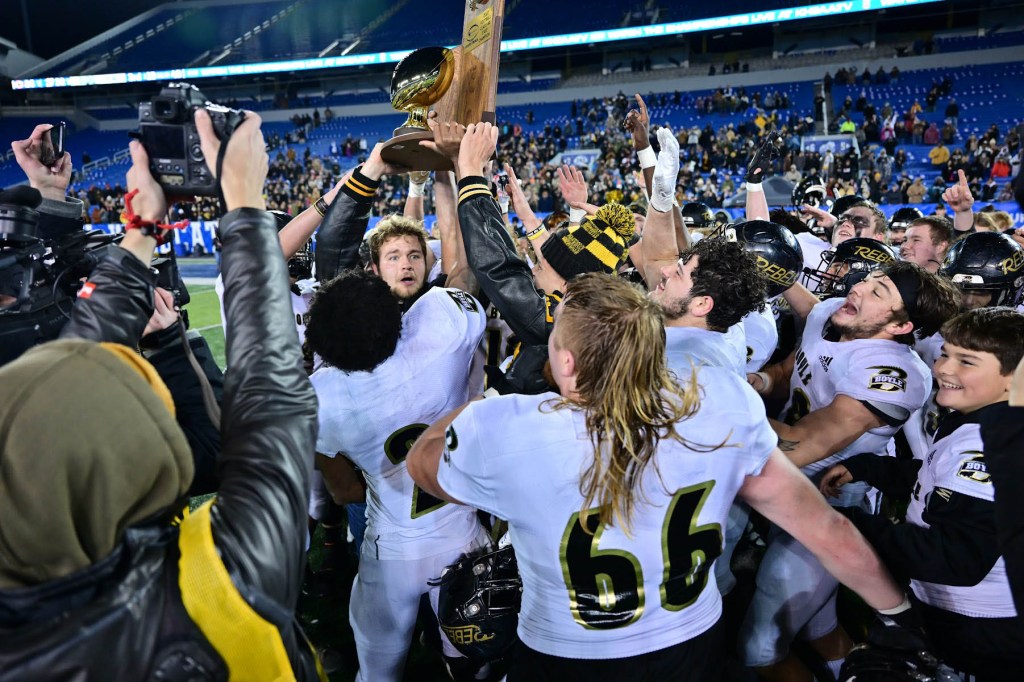 LEXINGTON — Boyle County was wearing white jerseys, but the Rebels might as well have been wearing black hats, too.

The Rebels embraced the role of villain Friday night as they battled Corbin for the Class 4A championship.

Convinced that everyone outside their own fan base was pulling for Corbin, they put on the mantle of the antihero at Kroger Field.

“Nobody wanted us to win,” Boyle lineman Andrew Hardwick said. “Like (assistant) coach (Tyler) Ray always used to say, ‘Somebody’s got to be the villain, and it might as well be us.’ Nobody likes a team that keeps winning, but somebody’s got to do it.”

Boyle has been firmly entrenched on the list of teams that other teams want to beat since before any of its current players were born.

“Everybody likes a winner, but then they don’t want to see you keep winning,” Haddix said.

And while the Rebels were technically underdogs — Corbin was No. 1 and Boyle was No. 2 in the KHSAA’s Class 4A RPI standings — the Redhounds might have been perceived as sentimental favorites to win their first state title since 1982.

Haddix said the leaders on this year’s Boyle team were fine with that, and Hardwick agreed that he liked playing the bad guy.

One more highlight: Montavin Quisenberry has probably had more highlights that drew more clicks on social media than any other Boyle player this season, and he had one more Friday.

Quisenberry scored on a 21-yard run late in the third quarter to give the Rebels a 26-20 lead, juking his way past a Corbin defensive back after getting into the open field.

“Our team needed a big play,” Quisenberry said. “It’s the first time I’ve been in a state championship playing in a big game like this, and I was going to give it my all and do what I had to do to get in the end zone.”

He said he knew he could score because of what he had done on the previous play, when an apparent touchdown on a shovel pass was wiped out by a holding penalty.

“On the play before that where I scored I saw that I could get out and the corner was out there one on one, so on the second play my plan was to get out there on the corner again and make them miss,” he said.

Quisenberry, a sophomore who transferred from Garrard County last summer, said he enjoyed playing on the statewide stage.

“At first I had nerves, but once the game got started I had to tell myself I’m the best player on the field again,” he said.

Ball security: Boyle didn’t have a fumble Friday, but no one on the team exhibited better ball security than Melissa Haddix.

Moments after the game ended, the wife of coach Justin Haddix had a firm grip on the game ball, and she was still clutching it tightly when she left the field with her family a few minutes later.

“I was told to protect the ball,” she said. “Justin said, ‘Don’t let anybody touch the ball.’”

Justin Haddix said he knew the ball would be in good hands as it began its journey to a trophy case at the school.

“Her and (assistant) coach (Travis) Leffew had to fight for it, and she won,” he said.

Melissa Haddix said the third championship the Rebels won under her husband, who spent six years as Corbin’s coach before coming to Boyle in 2020, was “even sweeter” than the first two, at least in her house.

“It’s personal,” she said. “We had a lot of history with Corbin. This one was really sweet. It closed a chapter that we’ve been trying to close for three years.”

Extra excitement: Extra-point kicks were an issue for both teams, adding to the drama of an already dramatic game.

Boyle linemen Huston Bird and Tommy Ziesmer blocked attempts by Corbin’s Jacob Baker. Bird had a block in the second quarter, and Ziesmer’s block came in the third quarter.

Boyle kicker Cole Andrews, who had made 60 of 66 extra-point attempts in the Rebels’ first 14 games, was just 2 for 5 on Friday on the more narrow goalposts at Kroger Field. (High school goalposts are almost 5 feet wider than those used on collegiate fields.)

Moving up the list: Boyle is now tied with Danville for sixth place on the list of schools with the most KHSAA football championships. The Rebels and Admirals trail only Trinity (27 titles), Highlands (23), Beechwood (17), St. Xavier (13) and Mayfield (12).

Boyle also is one of four teams — along with Trinity, Highlands and Beechwood — with at least two streaks of at least three titles each.

Numbers: Bodner rushed for 492 yards in Boyle’s last three games and finished the season with 1,136 yards in 13 games. … Quisenberry also passed the 1,000-yard mark, finishing with 1,009 rushing yards in addition to 833 receiving yards and leading the Rebels in scoring with 174 points. … Dawson threw for 1,704 yards and ran for 623 yards in 13 games. … Ziesmer finished with 20 tackles for loss and 10 sacks.