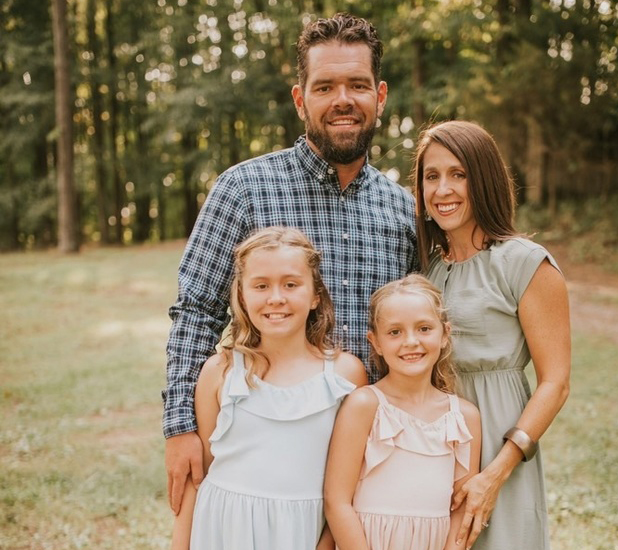 Josh Jaggers, Lincoln County High School’s head football coach and director of strength and conditioning, is a 2000 graduate of Danville High School. He and his wife and two daughters live in Stanford.

Outside of coaching and strength training, he enjoys spending summers at Lake Cumberland with his family, hunting, golf and working out.

Jaggers shared his Danville Schools experience and how his teachers and coaches helped him get where he is now.

The first nine years of my life, I grew up in LaRue County and Elizabethtown. I attended Helmwood Heights Elementary from kindergarten through third grade.

In the summer of 1997, we moved to Danville, and that’s when I also became a Danville Admiral. I played football, basketball, baseball and track throughout my last three years of high school. When we moved to Danville, Dad was our football team’s offensive coordinator from 1998-2004. He taught biology, chemistry and strength and conditioning as well.

A: There are so many people at Danville High School who impacted my life. Obviously my parents, but outside of that, I couldn’t imagine my life, even to this day, without getting to play for Coach Sam Harp, Coach Jerry Perry, Coach Ed McKinney, among others. They are all three very influential men in my life.

I also had some of the best teachers I’ve ever had in all my life at Danville. Mr. and Mrs. Kelly taught me to become better at math than I had ever imagined. Ms. Nelly Shelton was an absolutely amazing biology and chemistry teacher. I also enjoyed my time learning how to become a better writer by having Mrs. Scott. I was actually an editor for “The Anchor”, our school newspaper. Mr. Smith was one of my history teachers. History was always my favorite subject throughout my entire education, even into college. I have an undergraduate minor in history.

Many of the ways they taught me are ways that I spent teaching students in those same classes in my prior 17 years as a special education teacher.

A: Coach Harp is the obvious. I couldn’t imagine my life without him, and where it would be without having his guidance — that continues to go way past the football field. Coach Perry is the same way.

Pretty much all of the aforementioned teachers and coaches, along with Coach Chris Verhoven and Coach Chris Souder, are all men and women that I either still have a close relationship with to this day and/or I know that I can call on them at any time.

Some of my closest friends to this day I met at Danville High School. Guys like Chase Harp and Buddy Trumbo, for example. Having just turned 41 years old, there is very seldomly a day or two that goes by that I don’t talk to both. Guys like Jason Bryant, current principal at King Middle School in Mercer County, Tyson Pruitt — I know I can call on them any time. Just so many relationships.

I truly developed relationships at Danville, and every place along the way where I grew up and lived, that are for a lifetime, and I couldn’t imagine my life without them all.

A: Now that I’m a parent, that’s a great question and one that requires an ongoing “figuring out”, but I would say it’s a healthy mix of letting them find their way with a very healthy dose of your guidance as a parent.

Get them involved in everything. When it comes to extracurriculars, let them play them all, especially at an early age. Too many times you see young people starting to specialize in only one area at a way too early age, in my honest opinion.

Introduce them to new things. Let them know it’s OK to fail. Pick yourself back up and go again. There aren’t great successes without great failure — it’s just part of it. So don’t be afraid to let your kids fail. It’s just part of the process.

In time, along with our guidance as parents, they’ll find out who they are and what they want to be and ultimately find a school district that encourages those same things.

A: I couldn’t imagine who I would be or where I would be without my coaches and teachers. I just couldn’t. Outside of my own parents, the ones I mentioned above, along with coaches that I had in college and other teachers I had along the way throughout my educational process — they’ve made me who I am today, and it’s experience and the relationships I built with them that go way beyond what took place in the classroom and on the fields.

Knowing how they impacted me and so many others? I just knew I wanted to do the same things.

This piece is part of an ongoing series telling the stories of our Danville Alumni! We share a new alumni story once a month, and we want YOUR story. If you or someone you know is a Danville graduate and an excellent representative of the Danville community and the idea of #SuccessForALL, whether they live in Danville or not, please fill out the form linked below. You can also show your Danville Alumni pride on social media with the hashtag #DanvilleAlumniStories