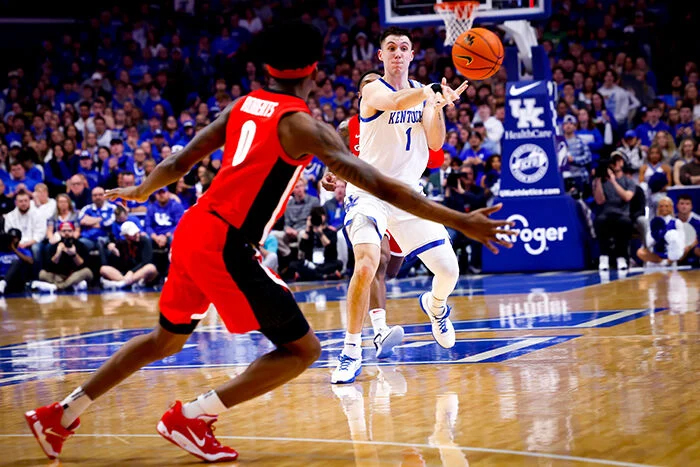 Kentucky got off to another slow start on Tuesday against Georgia. But the Cats had the best player on the floor in Oscar Tshiebwe and that was enough for UK to win 85-71.

Tshiebwe had perhaps his best game as a Wildcat, which is saying something for the defending National Player of the Year, registering 37 points and 24 rebounds. Kentucky needed them all to hold off a feisty Georgia team in this game.

The 24 rebounds by Tshiebwe is the second-highest total in Rupp Arena history. Tshiebwe set the record last season with 28 rebounds against Western Kentucky.

“You know Jacob (Toppin) had a double-double (11 points and 11 rebounds),” Calipari said. “But, Oscar was playing a video game and had 37 (points) and 24 (rebounds). He was the most impactful player. … Now you’re seeing him how he was a year ago.”

The 2022-23 Cats have consistently been slow starters. That troubling fact reared its ugly head again on Tuesday night, as UK made just three of its first 13 shots and trailed Georgia early. However, it was just 11-10 due to seven points and five rebounds by defending National Player of the Year.

The second half was a much different story. Kentucky made a conscious effort to get the ball inside to Tshiebwe, and the big man delivered. He scored Kentucky’s first nine points of the second half and assisted on a CJ Fredrick three-pointer that capped a 7-0 run and gave UK a 46-45 lead with 17:11 to play in the game.

“Coach wanted (my teammates) to go to me, because they were not stopping me,” Tshiebwe said. “It worked because they weren’t doubling me and I went one-on-one. It was a good game, we (fought.)”

Toppin had an outstanding game for the Cats with 11 points and 11 rebounds. Freshman Cason Wallace added 17 points for Kentucky, which won for the second consecutive game.

Kentucky returns to action on Saturday, hosting Texas A&M at Rupp Arena. Tipoff is set for 2 p.m. and the game can be seen on ESPN.