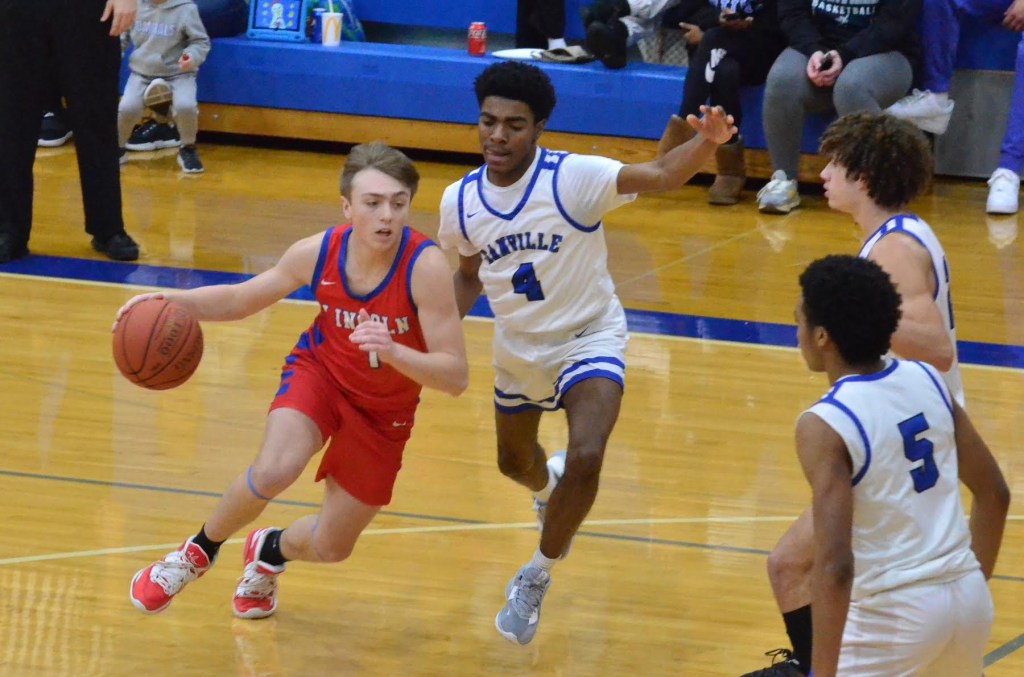 Blade Nuckols of Lincoln County drives toward the lane against Danville’s 4 during the first quarter Tuesday. Photo by Mike Marsee

The losses keep mounting, but the Patriots keep winning.

The Lincoln County boys are dealing with a rash of injuries for the second straight season, and they are powering through by playing sound basketball.

With two key players out of action, they have won their first three district games and seven in a row overall, extending those streaks Tuesday night by throttling Danville 65-41.

The Patriots won with an effective zone defense and aggressive rebounding — and with significant contributions from some players who are being asked to do more.

“We’ve got kids hurt and out and injured. … Other kids have got to step up and practice hard and keep getting better and keep improving,” Lincoln coach Jeff Jackson said. “We tell them all the time, ‘Be ready, be paying attention on the bench during the game because you never know when your name’s going to be called.”

Juniors Blade Nuckols and Trevor Miracle have been called on to do more over the past three games, and both played important supporting roles Tuesday to help Lincoln (13-5, 3-0 45th District) post an impressive road win.

Nuckols, who moved into the starting lineup when injuries trimmed the rotation, scored a career-high 12 points and grabbed four rebounds. Miracle, who had appeared in only six of the Patriots’ first 15 games, provided valuable minutes off the bench as the only reserve used for most of the game.

“They’re both juniors, and they’ve played some. They’ve been in the program for three years and kind of know what we’re doing, and both of them can shoot the ball,” Jackson said.

They and their teammates helped lock down Danville (14-6, 0-3), holding the Admirals to their lowest point total in four seasons.

The Admirals shot just 35 percent from the field, while the Patriots were right on their season average of 45 percent.

“We defended really well,” Jackson said. “I thought our defense was really good in our 2-3 zone, and we did a better job rebounding out of it in the second half. It was a really good win for us.”

Jackson Sims scored a season-high 18 points to lead the Patriots, going 3 for 5 from 3-point range and 7 for 13 overall from the field.

“Jack can shoot the ball. He’s a senior, and he’s been there. He stepped up,” Jackson said.

Sims also had a team-high eight rebounds for Lincoln, which outrebounded Danville 34-22.

“We got killed on the glass,” Danville coach Ed McKinney said.

Lincoln lost two starters to season-ending injuries last season, one near midseason and one in the regional tournament, and the Patriots still achieved heights the program had not seen before, going 31-8 and reaching the semifinals of the Boys Sweet 16.

On Tuesday they played their third game without center Will Bishop, who is out indefinitely with a knee injury, and their second without sixth man Jalen Smith, who is out temporarily with a calf strain.

Danville scored the first seven points of the second half to pull within 29-27 before Lincoln reeled off 14 unanswered points, getting six points each from Sims and Connor Davis as they opened a 43-27 lead.

The Patriots were 4 for 7 from 3-point range in the third quarter, with Sims sinking three 3s and Miracle adding one.

Danville tried to keep pace, using two 3s by Demauriah Brown and one by Jalen Dunn to pull within 49-36, but a 10-2 run over the next five minutes put the game well out of reach.

“He was vocal in the huddle, he was vocal at halftime,” Jackson said.

Josh Bixler scored 13 points, Brown added 11 points and Dunn had eight rebounds for Danville, which was coming off a run to the championship of the 12th Region All “A” Classic last week.

The Admirals were without leading scorer Owen Barnes, who suffered a broken bone in his hand Friday in the All “A” regional final that wasn’t discovered until Sunday. It isn’t clear when Barnes will return, and McKinney said the junior will play with a brace on his hand when he does.

“Obviously, we miss him bad. He makes us more competitive on both ends,” McKinney said. “It’s hard to take a guy like him out of your lineup with no notice, really.”

Danville may have taken a step back, but it still managed to keep moving forward.

Coming off their 12th Region All “A” Classic championship last week, the Lady Admirals followed a slow start with two strong periods to put away Lincoln for their 17th consecutive win.

“It wasn’t pretty, but I knew it would be a trap game,” Danville coach Judie Mason said. “I thought we looked sluggish in the first quarter, but I thought in the second and third quarter we played and got the running clock.”

Samantha Bottom and Love Mays scored 19 points each to lead the Lady Admirals. Mays had seven rebounds to help them outrebound the Lady Patriots 44-30.

“I thought we played hard; we just didn’t get a lot done,” Mason said.

Lincoln got a season-high 13 points from reserve Macey Rice, and Emily Estes had seven rebounds.