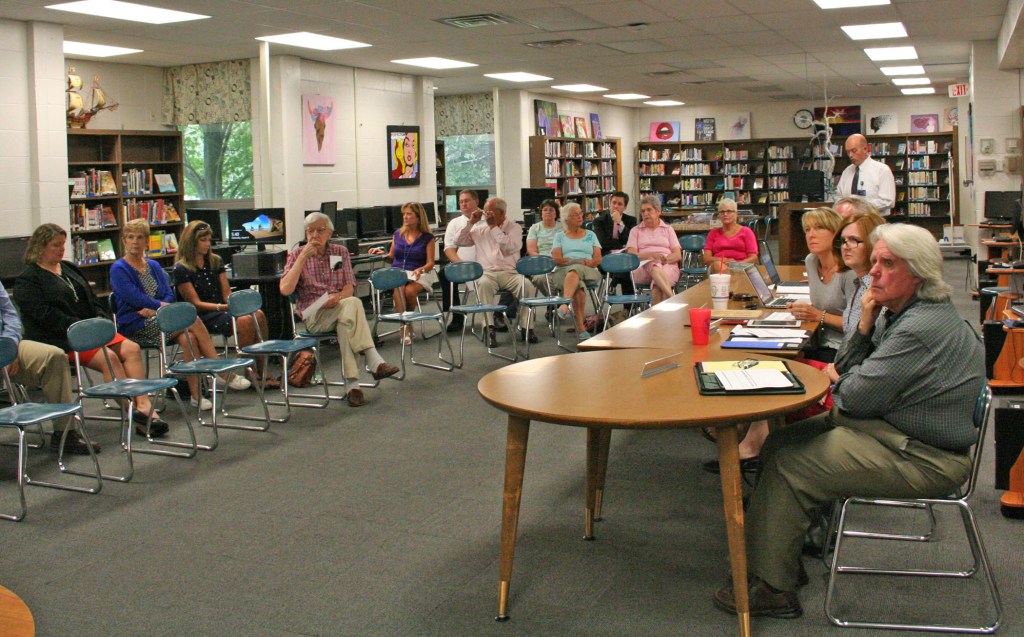 The Danville Board of Education approved a property tax rate increase in a 4-1 vote Wednesday night.

Board member Steve Becker voted against the increase, which represents a 4-percent revenue increase for the district.

During a tax rate hearing prior to the board of education meeting, Paul Dean, director of finance for the Danville Board of Education, said the increase is needed.

A compensating rate is a property tax rate designed to provide a taxing district with approximately the same amount of revenue as the previous year.

Mark Lister, a community member, said he had little empathy for the district.

Lister, who lives on a fixed income, said he hasn’t had a raise since he retired, and yet the tax rates continue to rise.

“My empathy is short,” he said.
He was joined by Dorothy Green, who is the mother and grandmother of Danville graduates. Green said she too is on a fixed income.

“There comes a point where seniors such as I can’t afford another increase. I’m not destitute, but I’ve worked hard all my life. There are people out there who cannot pay another dollar on taxes. I prepared; there are hundreds that did not prepare,” she said. “I don’t mind to pay my fair share, but … when my budget gets tight, I get tight. I don’t go out, don’t get my hair done, don’t get my nails done.”

“Maybe you need to be a little bit more thrifty,” Green said, suggesting the district find a way to tighten its budget.

“I don’t welcome a tax increase, but I am aware of how necessary it is,” she said.

Joyce Zinner asked the board to look into who the majority of people who pay the taxes are. There are many on her street, Zinner said, that own homes but can’t afford to fix them.

“Two more dollars can throw their budget out,” she said.

Zinner also works at the Sts. Peter and Paul Thrift Store, and said she meets many families in that situation, including families with Danville students.

Board Chair Lonnie Harp said the members understood the concerns.

“We do listen closely. We see the issues,” Harp said. “This is a difficult decision.”

Harp said the district was faced with the decisions to raise or rely on the state and federal government, which could decide they were no longer going to cover certain expenses. It’s not uncommon for something like that to happen, Harp said, citing the mandatory raises the state implemented last year without giving any funding to districts to help.

Becker asked his fellow board members to consider the lower 2.7-percent option as a compromise.

Superintendent Keith Look was asked what that would do to the district’s budget.

“We have a budget that reflects the priority of the school board. We work within a budget. If it’s less, it’s my job to respond accordingly,” Look said.

Via email, Becker said he was concerned about those community members on fixed incomes.

“I felt this year the school district should’ve increased taxes, but to a lower percentage. Yes, it wouldn’t have been the amount recommended by our superintendent and our finance officer, but it could’ve been a compromise to extend a lower amount of tax and the district finds a way reduce our spending from our limited funds. A partnership that would be beneficial to all our stakeholders,” he said via email. “I promise to all — your tax dollars are not taken for granted and neither are you.”