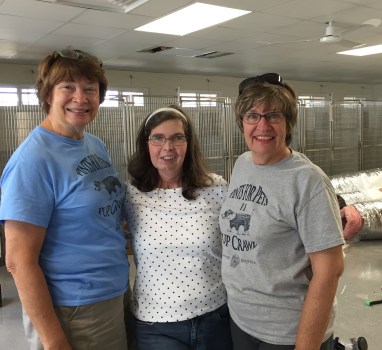 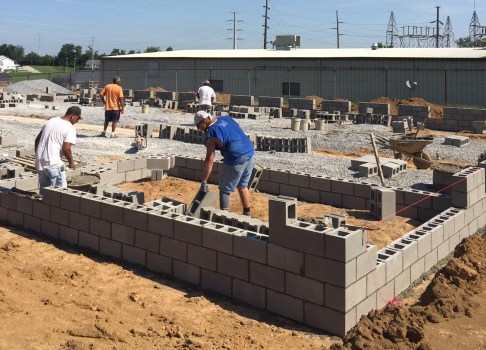 It’s been a long time coming, and the day is finally here. Saturday, the Danville-Boyle County Humane Society will open its doors to the Katherine E. Nelsen Adoption Center.

“I could go into how shelters are changing now, and how people treat their pets as family members …” says the facility’s namesake, DBCHS Executive Director Kathy Nelsen. “But the underlying thing here is to recognize the people who really did the legwork on making this project happen.”

It takes a village

The commercial building is nearly 5,000 square feet of blood, sweat and tears — a project that began as only a dream four years ago, now coming to fruition after endless research, meetings, fundraisers and “a quick and high learning curve” dealing with a capital project of this size, Nelsen says. Total costs came in around $600,000; the annual budget for DBCHS is only about $200,000.

What people may not know is most of the building was coordinated by volunteers.

“That is not common, by any means,” she says, offering that usually the staff of an organization does most of the work on a project like this, with volunteers helping by garnering donations and doing smaller tasks.

“Our volunteers worked from the plans all the way through to the final choices of materials, designs …”  Although Nelsen said it would be nearly impossible to mention every name in the vast pool of community support behind the project, there are certain people who she says the dream could not have been realized without.

“These special people would definitely shy away from the recognition that they truly deserve.”

Barbara Beaney said it seems like so long ago that board members began talking about a new dog kennel. As office coordinator and treasurer, Beaney was responsible for keeping track of all accounting, ordering equipment, helping with design and more.

“Somehow, when we created a case statement for the new adoption center in 2012, we naively set our goal at raising $250,000,” Beaney says, adding this changed quite a bit over the next couple of years. An out-of-town contractor told them to expect to pay $800,000 for what they required. Then, they chose David Barnett, a local contractor, who shared money-saving ideas with them — ones that didn’t affect the integrity of the building or compromise the floor plan and vision.

As the organization’s treasurer since 2002, Beaney says she saw and deposited every check and dollar into the building’s account.

“She kept a close eye on every dollar spent,” Nelsen says. She says in Martin’s quiet way, she manages to get more done in a day than most could in a week, and her historical knowledge of the organization was incredibly helpful in the process. “She gives the humane society her all, and the animals are better for it,” Nelsen says.

“I really am quite humbled by how many people, businesses and organizations have supported us financially in this endeavor. People really love their pets and it shows in their willingness to help the homeless dogs and puppies in our county,” Beaney says.

Bettie Poland was president of the board of directors during the start of the campaign four years ago. Nelsen calls her “My real partner in this project” and says she’s been tireless in her efforts and passion for making the building happen. Involved in every meeting and facilitating extensive fundraising efforts, Poland also gave presentations to area civic groups, met with potential donors and functioned as the liaison with Rotary on its international dinners, which raised $10,000 toward the project.

“I never did anything singlehandedly. This was a group endeavor at every turn,” Poland says. And yes, she says — she fundraised armed with not only drawings of the proposed plan, but pictures of cute puppies. She says she figured, “If you’ve got them, flaunt them. It’s for a good cause — for them!”

Janet Martin, the board’s immediate past president, just stepped down in June. Nelsen describes her as “quite instrumental in the planning and success of our two ‘Pints for Pets’ pub crawls,” an annual event which brought in money to support the building.

“Janet’s attention to detail, strong work ethic and persistence was greatly appreciated by all — her passion has been unwavering and the love she has for the animals is inspiring,” Nelsen says.

Martin says so many have given to this project — some with pennies they saved, some with honors or memorials to friends or family, some with monetary gifts they received in lieu of birthday or holiday presents.

“It is heart-warming to witness people put the welfare and happiness of our pets before themselves,” Martin says. She points to a quote by Gandhi: The greatness of a nation and its moral progress can be judged by the way its animals are treated.

“In view of that, I think the citizens of Boyle County have made a statement in their support of this project. If everyone takes a small step forward, great strides can be made and now the goal is very clearly in sight.”

The fight behind the building

The same week the campaign was announced to fund the new adoption center, Nelsen was diagnosed with cancer. Originally diagnosed with stage 4 nasopharyngeal cancer (cancer of the sinuses), Nelsen went on and off medical leave from that point on, but always kept working one way or another — even through 55 radiation and various chemotherapy treatments.

“They have been incredibly patient with all of my special needs, and they took on a role far and above what would ever be expected of a board member — this is a special group of ladies,” Nelsen says.

“We would get so excited about the way things were going, only to be bitterly disappointed by a major set-back,” Poland says, which she now realizes is par for the course on a project of this size. “But one thing that put it into perspective every time is while it was rough on each of us, Kathy was having to deal with set-backs while trying to fight cancer.”

For four years, Poland says, CyberKnife treatments, chemo and radiation had to be dealt with by Nelsen regardless of how the kennel journey was going. “If Kathy could get back up after a building problem occurred, then certainly the rest of us could, too.”

Nelsen has been hesitant to talk publicly about her fight with the disease. She feels so much attention has been given to her during this time, it doesn’t seem fair when this group worked beyond most people’s imaginations to get the job done.

In January, Nelsen learned the cancer has spread to her bones and lungs, making it untreatable — therefore terminal.

“Nobody really knows how much time I have, so there has been a scramble to get it done so I could see the final building,” Nelsen says, her positive outlook seemingly unbroken. “I feel like I have been supported by some of the finest human beings I could ever know. Everyone worked tirelessly, pulled their weight and the honest, heartfelt connection they have to this project speaks volumes about their true spirits.”

Nelsen also credits the community as a whole, and funding received from the city and county.

“We want this new adoption center to be a point of pride in Boyle County,” she says. “I am thrilled to literally see a dream come true go up before my eyes.”