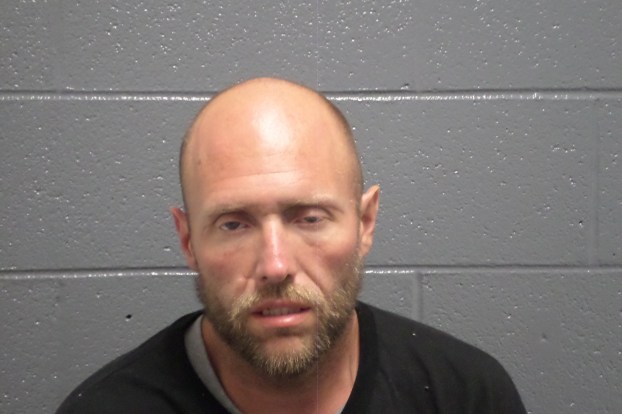 Man broke into multiple cars, then fell asleep in one, police say

(Photo contributed)
A photo from the Harrodsburg Police Department shows Matthew F. Stewart, 35, of Louisville, who allegedly illegally entered multiple vehicles at CC Auto before falling asleep in one of them.

HARRODSBURG — A Louisville man was arrested Monday after Harrodsburg police officers found him asleep in one of several vehicles he had allegedly broken into.
Matthew F. Stewart, 35, was charged with seven counts of theft by unlawful taking, three counts of third-degree criminal mischief and second-degree trespassing.
According to the Harrodsburg Police Department, officers responded to CC Auto shortly after 8:30 a.m. Monday when an employee reported that someone had pried open the business’ key drop box and used the keys inside to get into multiple vehicles.
“Officers went out to the lot to investigate and after checking several vehicles, they found the perpetrator asleep in the driver’s seat of one of the vehicles; he was wearing gloves and a full face mask” a news release from the Harrodsburg Police Department reads. “They woke him up and placed him under arrest without incident.”
Stewart faces the three criminal mischief charges because three of the vehicles were damaged, according to police.
After Stewart’s arrest in Mercer County, the Lincoln County Sheriff’s Office said Stewart is allegedly involved with the theft of a Harley Davidson motorcycle and a Corvette in the Waynesburg area.
Lincoln County Sheriff Curt Folger said both of the vehicles were recovered before the owners knew they were missing. Both vehicles had sustained some damage, he said.
Stewart was being held in the Boyle County Detention Center Tuesday on a $10,000 cash bond.
You Might Like

By KERRY STEINHOFER kerry.steinhofer@amnews.com The local addiction support group Families Into Getting Help Together (FIGHT) hosted a “Run Against Addiction”... read more