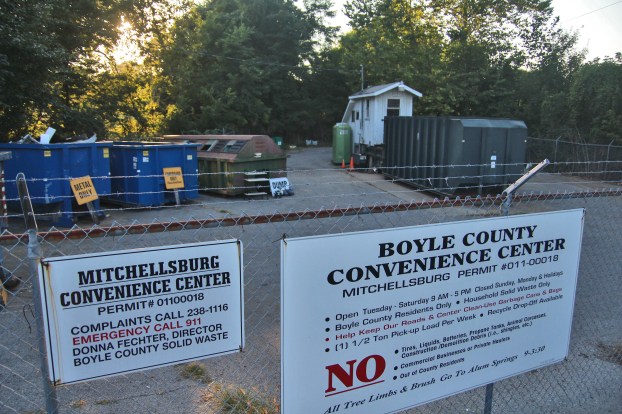 The Mitchellsburg Convenience Center was previously considered for closure. The center is now one of two that will see reduced hours.

By KERRY STEINHOFER
kerry.steinhofer@amnews.com
The Boyle County Department of Solid Waste Management plans to recommend the closure of the Mitchellsburg Convenience Center due to financial reasons.
According to Solid Waste Director Donna Fechter, this year, the convenience centers will operate on a budget of $775,000, which covers all the convenience centers in Boyle County without capital expenses added. There’s an additional $150,000 budgeted for capital improvements.
“Our budget is right around $900,000 or more for solid waste this year for Boyle County convenience centers,” Fechter said.
Mitchellsburg Convenience Center costs $169,731 to operate, including capital expenses. Without capital expenses, the annual expenses are $78,206, Fechter said.
“That’s how much the center costs if we don’t have to do anything to it,” Fechter explained.
There are only about 10,000 people using the Mitchellsburg center to dump their garbage — a decrease from last year’s customer flow of about 15,000, Fechter said.
While there are only about 3,000 people using the Forkland Convenience Center, Fechter said the center is geographically too hard to take away.
If the Mitchellsburg center is removed, customers will be split between the Forkland and Perryville centers, Fechter said
If the Mitchellsburg center is removed, that would leave four other convenience centers in Boyle County. Fechter said Mercer County only has one convenience center and they are twice the size of Boyle County.
“With that being said, then we have to look at where our residents have to go if we close Mitchellsburg and how far would they have to go,” she said. “We aren’t looking at great distances.”
People who currently use Mitchellsburg would be traveling anywhere from 5 to 15 miles to reach a convenience center, Fechter said.
With the possibility of an increase in customer flow at Forkland, Solid Waste would move a single-phase compactor from Mitchellsburg to Forkland, which would save more money by not having to replace the one currently at Forkland for another five years.
“What we are trying to do is be fair in doing this — look at the cost, look at the customer participation and make a decision that would best manage the Solid Waste Department,” Fechter said.
If the Mitchellsburg center closes, there could be a substantial amount of savings for the county.
Fechter said the current convenience center contract is a 10-year contract with the option of a five-year extension. In the next contract term for 10 years, the estimated savings from closing Mitchellsburg is $703,854 — more than $70,000 per year.
Fechter said that number is a low estimate because it doesn’t take into account rising prices as gauged by the Consumer Price Index.
“This is the minimum we would save by closing this center,” Fechter said.
If the same contract was extended for another five years, the estimated total savings over the 15-year period would come to $1,094,884. That number is also a low estimate, Fechter said.
“It’s all about finances, really,” Magistrate Patty Burke said. “If we keep the center open, we will have major expenses that will have to happen. This is a management decision that is all based on facts based on finances.”
“In order to make these centers remain free for the residents, we need to look every year on how we can better serve the public in using their money in a proper way and still serve them with the quality that we have for years,” Fechter said. “My recommendation, with all the things I have looked at including customer flow, distances and safety, is to close the Mitchellsburg Convenience Center.”
Fechter said she believes once people see the numbers she has calculated and the information she has put together, they will understand why the center should be closed.
She said part of the closure plan also involves opening the Perryville center six days a week, with Sunday being the only day it is closed.
“I want to bring this to fiscal court so they can look at it, so it becomes the big picture — not just the solid waste department, but the big picture for fiscal court to look at all their fiscal finances,” Fechter said.
“(Fechter) is not telling us what to do, she’s just making the recommendation and she’s given us the information to make our decision, and I really admire that she keeps us informed,” Burke said. “If (she) didn’t do this, we would have no idea about this information; we would be clueless.”
The discussion of closing the Mitchellsburg Convenience Center will be on the agenda at the next fiscal court meeting, 10 a.m. Tuesday.
“Whatever decision they make, that is the policy that I am charged with enforcing in my department, and I will do that,” Fechter said. “But they can’t do it without information.”
IF YOU GO
The Boyle County Fiscal Court will discuss the possibility of closing the Mitchellsburg convenience center during its next regular meeting, set for 10 a.m. Tuesday.
You Might Like

No change of venue for Kenneth Allen Keith