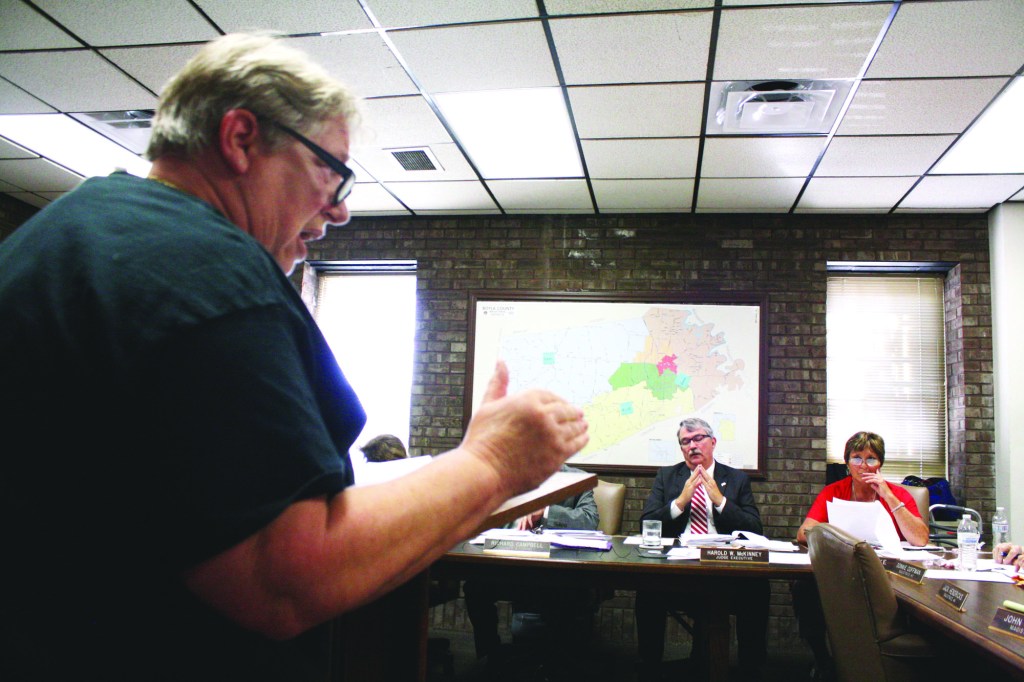 Some heated exchanges of differing opinions about whether or not to close the Mitchellsburg Convenience Center forced Judge-Executive Harold McKinney to call order a few times during Tuesday’s Fiscal Court meeting, and make a final motion to “make sure it works.”

The county’s solid waste director, Donna Fechter, appeared before magistrates with the reasons the county would be better off if the center was no more. She said the center costs $169,731 to operate, including capital expenses; annual expenses are $78,206 without capital expenses.

After much debate, McKinney was the first to make a motion to close the center. Only Magistrate Patty Burke seconded it, defeating the motion 4-2. McKinney then motioned to keep the center open, to which Magistrates John Caywood, Dickie Mayes, Donnie Coffman and Phil Sammons voted in favor of, resulting in a 5-1 vote.

“I’m just trying to give you an overall view of what I see on how we can still serve the public with the best possible quality that we always have, yet saving the money that we need because we are going to have to work on every single one of these centers,” Fechter told the court.

Fechter said the current convenience center contract is for 10 years, with the option of a five-year extension. In the next contract term for 10 years, the estimated savings from closing Mitchellsburg is $703,854 — more than $70,000 per year.

Fechter said that number is a low estimate because it doesn’t take into account rising prices as gauged by the Consumer Price Index.

“This is the minimum we would save by closing this center,” she said. If the same contract was extended for another five years, the estimated total savings over the 15-year period would come to $1,094,884. Once again, a low estimate, she said.

Magistrate Burke — a member of the Solid Waste Committee who was the only person in attendance at last week’s committee meeting when Fechter brought up the concern and facts — said it was “with a heavy heart I feel I have to recommend to close the (center).”

Resident Carolyn Quinn disagreed, citing safety concerns for residents who would have to travel elsewhere.

Fechter said people who currently use Mitchellsburg would be traveling anywhere from 5 to 15 miles to reach a center. She said people in other counties are forced to travel much further to get to their respective centers, to which Quinn and some magistrates balked at. They said the area has more curvy roads than other counties and are extremely dangerous to travel on during winter months.

“It’s not as safe to travel that far,” Magistrate Mayes said.

Quinn said a petition was circulated, resulting in 474 signatures to keep the center open. “There were an additional 100 names that weren’t even brought in,” she said. “That should have told them from the beginning this was not a good thing.”

Magistrate Caywood said while the numbers presented by Fechter may show a logical way of making everything work if the center was closed, there are more important things to think about.

“Maybe economically, it’s not the wisest thing to do,” Caywood said. “However, these are citizens and people who we care for and are part of our county and we have the responsibility of taking care of those people, and doing the best we can is our job.”

In McKinney’s final motion, he included keeping the center open, and added “and work with the local people and to make sure it works.”

“It turned out for the best, and if it hadn’t, we would have pursued it further,” Quinn said. “I am very grateful that the four who voted to keep it open were people of morality and knew what the situation was. They had the compassion for the people out there to vote to keep this open.”