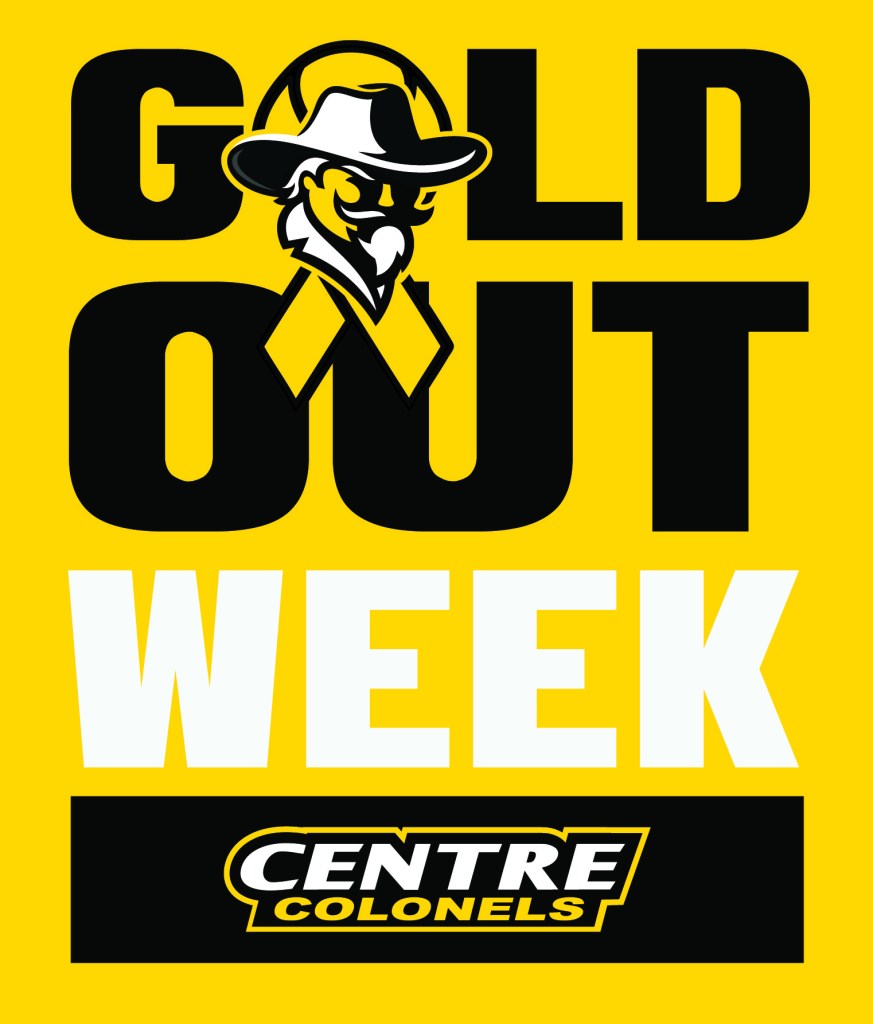 The response and impact from last year’s Gold Out Game was so great, the Centre athletic department has decided to extend the benefit for pediatric cancer research and awareness from one football game to an entire week of sporting events. The Gold Out Week kicks off with Sunday’s volleyball match against Birmingham Southern and wraps up with four games Saturday, including the football game against Chicago at 1:30 p.m.

“Last year was a success, and so then the thought in year two is how can we take this positive experience for the families of the young folk as well as our students and fan base, and how can we grow this thing,” Centre athletic director Brad Fields said. “A lot of credit to people on our staff, Ashley (Taylor), Andrew (Gavin) and Stanley (Willard), who developed this into a week-long event, which gives us more time to raise awareness of this cause and to connect with families. It also broadens the scope in that we’re involving other sports.”

The volleyball, men’s and women’s soccer and football teams will all have home events next week, opening up the week to six different home games.

The families of the pediatric cancer patients and survivors weren’t the only ones who benefitted from the Gold Out game last year. Fields said he sat in Board of Trustees meetings in April and the event was still a positive topic.

The football student-athletes and coaches were greatly affected by the day, so Fields and the department wanted to give that experience to the other sports while opening the week and other events to more families affected by pediatric cancer.

“Without question, it was one of the most powerful things we did all year,” Fields said. “I feel like the families were impacted, but I know without a doubt from talking with our staff and talking with the student-athletes, it was such a memorable experience. I think they’re all looking forward to the opportunity to connect with a special group of folks again this year.”

The event started last year around the Colonels football game with proceeds from the t-shirt sales and game raising money for pediatric cancer organizations. Once again, 10th Planet in Danville has donated 750 t-shirts, which will be sold at the athletic events and around campus; money raised will benefit Kids Cancer Alliance.

Centre is also supporting an auction event through Camp Horsin Around next Saturday by creating a Centre athletics auction basket to raise money for the camp.

“We’re a part of the Danville-Boyle County community. That’s important to us. For us to be able to raise awareness of an issue that’s a national issue, but to do it in such a way that it impacts our family locally was a big appeal,” Fields said. “There’s a number of folks on our staff who have young children. We work with young adults who are 18-to-22 years old typically that are not that far removed from being youngsters themselves, there’s a natural fit there.

“For at least a day or in this case a week, we’re able to take our honorees and get them out there, get them involved in something and maybe take their minds off things for at least a little while, that has tremendous value to it.”

According to Gavin, the Assistant Athletic Director for Advancement and External Relations, the football game will still be the centerpiece of the weekend. Pediatric cancer families will enjoy lunch before the game and they will receive field passes for the game. One player will represent each child, and the families will be recognized during the game.

“A couple of our players reached out regularly to the kids after the game (last year),” Gavin said. “That’s been fun to see.”

Colonels football coach Andy Frye is pleased to see the event extend beyond the football team and one day to now touch the entire campus. The event started with assistant coach Carter Conley and his wife, Christina, who is a nurse practitioner in the oncology unit at UK Children’s Hospital.

“When you have something like that, your football team kind of sees the perspective,” Frye said. “You have to do that in life. It forces you to say, ‘Wow, this can be a tragic event in people’s lives,’ and you start to realize it’s not about you. You start to see the bigger picture. That’s the best thing that happens — it forces you to think about others and be selfless.”

There is never a charge for admission to the volleyball and soccer matches at Centre. Ticket prices for the football game remain the same as well, $5 for adults and $3 for children 12-and-under.

All games at Centre College

Admission is free for volleyball and soccer

Ticket prices for football: $5 for adults, $3 for children 12-and-under