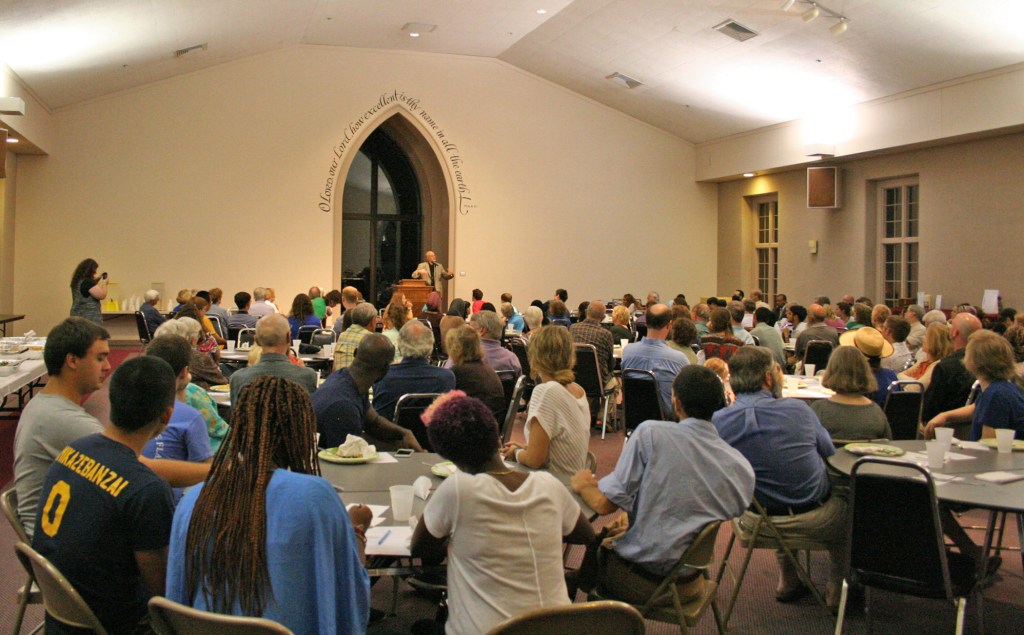 Eid al-Adha, is a time of celebration, a time of forgiveness and restoration in the Muslim faith, and a time to share with friends and family, following the end of Hajj, the time of pilgrimage to Mecca.

So, for the many Centre College students who couldn’t return home, Thursday night, the final night of Eid, was an opportunity to share with the college community and the community at large, what the time means to them. Nearly 200 people were in attendance at the Eid al-Adha dinner, held at the Presbyterian Church of Danville.

According to Rick Axtell, the campus chaplain, this is the first year the event has been held off-campus, although not the first year for the event to be held at the college. This year, he said, the college has the largest population of Muslim students it has ever hosted.

Ihsan Bagby, an associate professor of Islamic Studies at the University of Kentucky, was the key speaker at the event, sharing the experience of the Hajj, or the pilgrimage to Mecca. Bagby explained that those on the pilgrimage don the equivalent of two white sheets or towels, wearing only that for three days, which “takes some getting used to.”

The wardrobe, he said, is representative of a poor person in 17th century Arabia. It’s symbolic for a few reasons — to show that everyone is the same, that they are nothing compared to God, and that it is similar to a burial shroud, highlighting a dying of self. Nearly 2 million people participate in this each year.

Asking forgiveness, Bagby said, is a central theme of the pilgrimage.

The idea of the pilgrimage, along with Eid al-Adha, also known as the festival of the sacrifice, is to represent aspects of Abraham, Hagar and Ishmael’s journeys. Many Muslims believe it was Ishmael that Abraham was going to sacrifice, although the Quran never states which son, Bagby said.

“The moral of the story, both in the Bible and the Quran, is the willingness of Abraham to give up everything to follow God, to the point of ready to sacrifice his son. Of course, in the Bible, God substitutes an animal, same as in the Quran,” Bagby said.

At the end of the time of Hajj, Muslims celebrate Eid al-Adha, which officially ended Thursday.

Prior to Bagby speaking, some of the Muslim students got up to speak about their favorite memories regarding the Eid al-Adha.

“One of the things I really like about the Eid celebration back home is the fact that all of my family comes together. I have a really big family,” said Mariama Minteh, a sophomore from the country of Gambia. Having the whole family together, laughing and sharing is one of her favorite parts of the holiday. “We all spend the day together, dress up, go to family and friends’, pray together … having my family together on that specific day is something that I always look forward to.”

Another student, freshman Sarah Mandiwala, described it a little bit like Christmas, because “that’s how big our holiday is.” From London, Kentucky, Mandiwala said it made her a little sad to not be able to return home for this year’s Eid celebration, to the mosque that her family helped build there.

“We have a small community; it’s a pretty amazing, great community. To me, growing up in this American society with a Muslim background, all of these holidays are very important to me. During Eid, we would join together, our whole community — there’s at least 15 families — we would get together for our morning prayers. Our community is so small, but we’re all so close. It’s like extended family,” she said. To help the children celebrate, the parents would get inflatables or party games during the celebration. “It was very Americanized for us, because we grew up in this American culture, but we were surrounded by the culture that our parents grew up in. It was an amazing opportunity to have.”

A native of Indonesia, by way of Lexington, Rai Utomo shared how different it was to celebrate in Indonesia, a largely Muslim country, versus Lexington.

“That’s one of my favorite Eid memories, my first Eid in Indonesia, a Muslim-majority country. In Indonesia, it was nice to see Eid celebrated like Christmas is here. The call to prayer, I could hear it through the streets and I could see my neighbors and everyone getting dressed up and going to prayer. It was nice to see Eid being celebrated throughout the country,” she said.

Something that is not done everywhere, Utomo said her family would ask forgiveness from the elders.

“We would have my grandparents sit in a chair and all of my relatives, oldest to youngest, would sit at the feet of my grandparents and ask for their forgiveness. It’s very emotional, we all cry,” she said with a smile. “I really appreciate you all sharing this holiday with me and all the Muslims in Danville.”

The time that Eid takes place is determined by the lunar calendar, something that directly affected Shanze Arshad’s favorite Eid memory.

“It was me, my mom, and my little sister, and we got henna done, all the way up our arms. We were all anxiously watching the T.V. to learn if tomorrow would be Eid or if tomorrow we would have to fast, I remember us being so excited, anxious and waiting for the news. When we found out the next was going to be Eid, we left quickly and went around the town of Karachi (Pakistan) and tried to go shopping while we still had wet henna on our hands, which is not easy to do,” Arshad said, which was met with laughter. She shared how they traveled to relatives houses and how special that was, as it had been 10 years since she had been there. “It meant a lot to be there.”

Students shared a meal with their classmates and friends, as well as members of the Danville Muslim community, and the community at large. Some of the Muslim college students applied henna tattoos for free on the hands and arms of their classmates.

Kendra Peek/kendra.peek@amnews.com
Ihsan Bagby, an associate professor of Islamic Studies at the University of Kentucky, was the special guest at the Eid al-Adha Dinner, hosted by Centre College’s Muslim Student Association at the Presbyterian Church of Danville.

Kendra Peek/kendra.peek@amnews.com
Hibah Siddiqui issues a welcome to all those in attendance at the Eid Al-Adha Dinner, held at the Presbyterian Church of Danville.