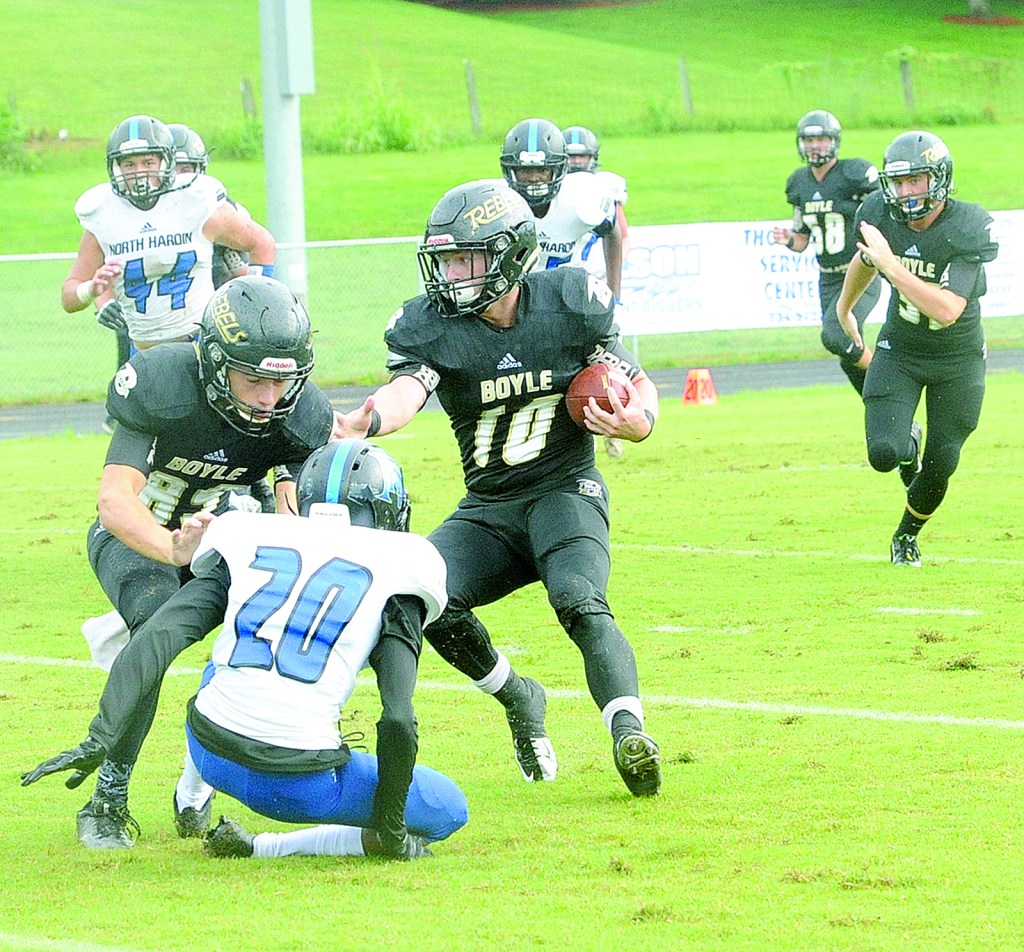 A dominant display last week has Chuck Smith looking for more of the same from his team this week against Collins.

The Rebels won 41-13 at Anderson County on Friday and will host the 3-0 Titans this week, who had a bye week last week. Smith said the team came focused to practice last week after its loss to Danville two weeks ago.

“I think the guys really locked in,” he said. “I think we got our feelings hurt, and were a little embarrassed about the way we played against Danville. I think they came out and were really locked in and focused, we were able to get some offensive drives going. I thought our defense played pretty well, special teams did a good job, I think it was a complete team effort in getting that first win. And we really needed that first win. We needed to have some kind of payment for all of our hard work that we put in.”

Collins will provide a familiar challenge to Boyle on Friday at Rebel Stadium.

“They’ve got a really nice football team, a lot of speed, a lot of athletes,” Smith said. “Those kinds of things cause us problems, as they did in the first three games of the season. This team is a nice football team. They’re well-coached, they know what they’re doing. They’re going to throw the ball all over the field. They heave it up, they’re probably going to throw 80, 85 percent of the time. When they run, it’s going to be their quarterback and they have a really nice running back that they use in the running game.”

Collins quarterback JD Smith has 858 yards passing on 55-of-88 passes. He also leads the team with 45 rushes for 206 yards. He’s combined for 15 touchdowns (13 passing, two rushing), playing a part in all but two of his team’s touchdowns.

Playing against another team that likes to spread opposing defenses will be a great opportunity for the Rebels’ to see how far they’ve come since losing to the Admirals.

“We played North Hardin, which was a throwing, spread team. Lafayette was a spread team and so was Danville. Anderson wasn’t so much of a spread team, but Collins is,” Smith said. “They fall into the same category as those first three teams we played. So we’ve got to show that we’ve made some improvement, that we can play against a team like that. Because when we get into our district play, Lexington Catholic is going to fall into that category. And so is Louisville Central. If we can’t play those kinds of teams with success, then we really can’t talk about getting out of our district or our region.”

“We wanted to get Reed some experience in the (Anderson) game, so we put him in a series and it went well, so we went with him for a couple more series,” the coach said. “I think that’ll be a game-to-game plan for us, depending on the game situation, the score and how everything is going.

“But Sam (Tiller) has done a good job, he’s our starter, he had a really good game. But I think we need to get another quarterback some experience. We were able to do that with Reed, and I think Reed did a good job with it.”

Tiller had his best game of his career against Anderson, completing 10-of-14 passes for 189 yards and three touchdowns. He’s embraced the change in the backfield.

“He’s just always been a team player, always will be a team player,” Smith said of Tiller. “He’s playing pretty good, played pretty good against Anderson County and he’s practicing better. I think he needed some experience, too. He got thrown to the fire pretty fast with those first three games, they were really high-profile, championship-type atmosphere type games. I think he learned a lot in those three games, and hopefully it’s going to help him down the road as well.”

The entire team has improved on the practice field, after a talk from the coaching staff. Smith said he’s hopeful that his team can continue its positive trend during practices, and that will translate to games.

“We’ve just talked to them about how they need to start practicing,” Smith said. “You play like you practice. It’s been that way for 100 years and it’s going to be that way for the next 100 years. You play like you practice. You’ve got to start practicing better to play better, and when you come to the field, you’ve got to get locked in on what you as an individual has to do within the scheme of the defense or the offense or the special teams for those three phases to work. I think they’re understanding it a little bit and buying into that belief. If they’ll keep doing that, I think we’ll have a chance to be a pretty good team down the road.”