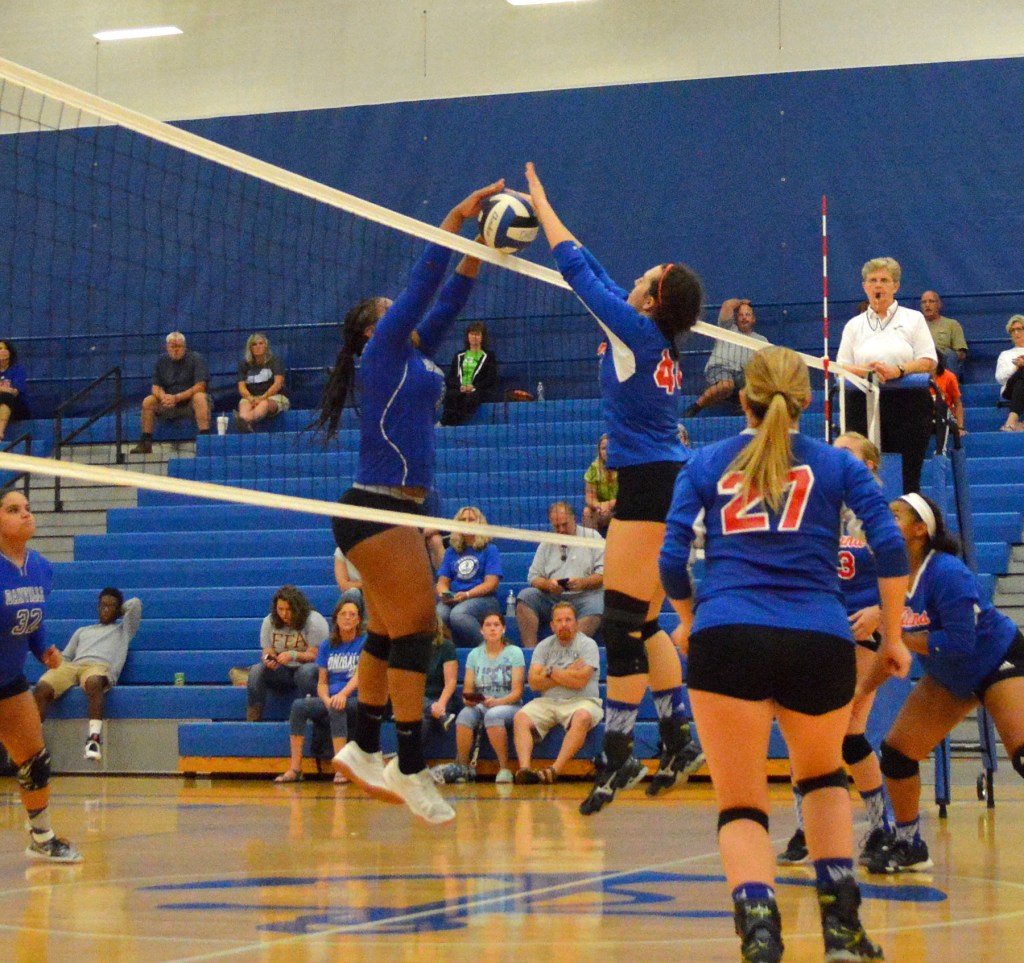 Jeremy Schneider/jeremy.schneider@amnews.com Mercer County's Tori Long goes up for a block against Danville's Alexis Branscum during Thursday's match at Danville. The Titans won 3-0.

Coming off what coach Lynn Flach said was its worst performance of the season, the Mercer County volleyball team desperately needed a strong outing Thursday at Danville.

The Titans rebounded from Tuesday’s loss to Casey County with a 3-0 sweep of the Admirals at Danville, winning 25-12 and 25-17 before rallying late for a 25-22 win in the third set.

“It’s hard to come into Danville and play well, and for the most part we did,” Flach said. “To come back and bounce back and do our fundamentals, our basics was a very key thing for us.”

Flach said the Titans have been working on their service game, and it showed. Tori Long led the list with eight aces, and the Titans had six runs where they reeled off at least four straight points.

“We’ve been up and down on that, so we’ve been working a lot on that in practice, serving more aggressively rather than just serving to get it over and in,” Flach said. “We also had some missed serves in a row. One of my big things is you don’t miss two in a row because that’s just hard on momentum.”

Momentum was a huge factor for both sides. It was difficult for the Ads to recover during and after many of the long Mercer streaks, and the Titans used that to cruise to easy victories in the first two sets.

“Volleyball is such a mental game and goes off of momentum, so when you get a couple of aces or good serves in a row, the team gets up and plays off of that,” Flach said. “But it also works in reverse for the other team.”

Danville coach Maggie Myers said the Ads serve receive passing has improved throughout the season, but her players still get tight when a particular portion of the lineup comes forward to serve.

“We go into that rotation and get a little scared and on our heels, and then it snowballs into the five, six, seven point runs,” she said.

Long also teamed with Janelle Taylor to form a solid hitting duo along the front. Long had seven kills while Taylor added six. Flach paired the two along the line earlier this season, with Long as the setter, but a knee injury has recently forced Long’s return to middle hitter.

“I have a very versatile team that can play many different positions,” Flach said.

Long’s influence was felt early in Thursday’s match. She had two kills during a first-set opening 5-0 run, and her string of five straight service points pushed the Titans ahead 13-3. The Ads would get within seven points at 14-7, but they couldn’t get any closer.

In the break between the first and second sets, Myers had a strong message for her team.

“I made it very clear that I knew that they were stronger and more talented than what they demonstrated,” Myers said. “I think we saw them more focused and ready to compete going into the rest of the match. I hate that we consistently get down pretty bad that first set and that it takes that to wake us up and really get us ready to play. I haven’t found a solution to that yet.”

Unfortunately for Myers and the Ads, getting down early in matches has become something of a habit. They’ve lost the first set in 11 of their matches, and conversely, they’re 4-0 when winning the first.

“We have a tendency to come out that very first set playing slow, not playing with the energy I’d like to see them come out with,” Myers said. “We play distracted. Other things catch our attention, whether it’s people in the stands, music during pregame, sometimes on the bus ride the conversations about school or homecoming. It is very difficult to regroup mentally and compete that first set.”

Mercer opened an 8-3 lead in the third set and then reeled off six straight points for a 17-9 lead. However, Danville came back to take a 21-20 lead before the Titans closed the match with a 4-1 run, capped off with a Long kill.