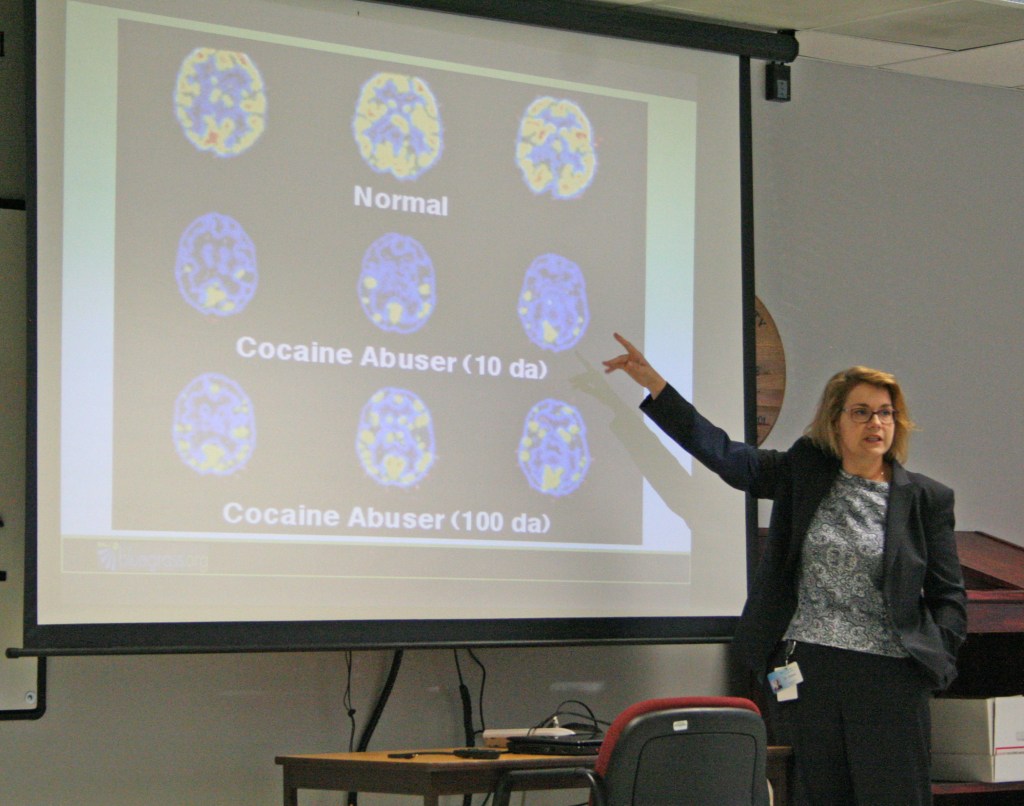 Kendra Peek/kendra.peek@amnews.com LaTonia Sweet explains the effect that drugs have on the brain.

Only a handful of people turned out for the first Protecting Our Kids: Drug Prevention is Everybody’s Business forum held Thursday night by the Boyle County Agency for Substance Abuse Policy, ASAP.

Part of the problem

“It is the challenge of the problem,” said Kathy Miles, coordinator of Boyle County ASAP, when discussing why the number might have been so low, with a few educators, a city official, county official and one school official, along with a few members of the ASAP group.

The event had been advertised online, in The Advocate-Messenger and even sent out to schools. The night was thought through, with Wednesday being avoided because it is “church night,” she said, adding it’s difficult to avoid sporting events. Even the allure of free food wasn’t enough to draw the crowd.

“All of us respond to crisis more because we can feel it at the moment and see it. A lot of our community has responded (to the overdose deaths), but when it comes to that long, sustained, ‘What do we need to do in the long run?’ ‘What do we need to do to be better parents?’ … those take more work in the long run,” she said. “We had two great speakers who are very engaging and open to talking through questions, concerns and answers and would have been great for parents and teachers.”

Last year, ASAP held a similar forum, which did have a better turnout.

“It makes me sad. I know we have lots of hurting families… there are small children going through their parents’ relapses. How important it is that we give them better role models until their parents get through their rehab? All of us could do a better job thinking through and supporting our children.”

The group plans to do some strategizing to find a better way to reach parents and teachers, perhaps setting up events just for teachers at the schools. Catching parents might be more difficult.

“I went to bed concerned. Yes, we know that reaching one or two or three is a good thing, we don’t want to downplay that. The word about addiction is spreading in small ways as well as big ways. But we want to use our resources wisely and reach bigger audiences,” Miles said.

“I’m really thankful for those in our ASAP group … who said when we started our budget and continue to say during meetings, ‘Let’s not forget about trying to stop this way early.’ It would be easy, with the overdose deaths and the candlelight vigil and all the things we’ve done in the last two months — it would be easy to just go that direction to try to put out those fires and deal with all those awful things going on and not do this,” said Miles. “It was with thoughtfulness and commitment to prevention and education that we planned tonight. We know that prevention does work.”

The event was kicked off by Dr. LaTonia Sweet, sharing how drugs affect the brain, especially youth and adolescent brains. Sweet is a psychiatrist and addictionologist, trained to work with those with addiction problems, and the chief medical officer for Bluegrass.org, which works in 17 counties in Kentucky, including Boyle County. Bluegrass.org works to assist individuals and families in the enhancement of their emotional, mental and physical well-being by providing behavior health, intellectual and developmental disabilities and substance abuse services.

“These people have changed their brains. That’s something we have to think about whenever we are dealing with folks with addiction. They have physically changed their brains,” Sweet said, showing scans of normal brains compared to those who have been clean from cocaine for 10 days and then clean for 100 days.

Sweet said a different approach was needed to speak to individuals who were or had been addicted to drugs, different than those who had never been addicted.

“They have to want to stop and not be able to. What really gets a lot of people in the community is the family issues. ‘How can people leave their families?’ ‘I know they love their kids, how can they choose this?’ That is one of the hallmarks of addiction. The drive is more than they can overcome,” she said.

There are a few reasons people can become addicted, Sweet said. For some, there’s a genetic disposition toward the drug, which makes them more inclined to continue taking it and become addicted. But, as with everyone, they have to make the choice to take it the first time. In the case of teenagers, Sweet said they are often risk takers, meaning they might be willing to try it.

She called it “the want,” when someone becomes addicted and begins to crave the drug. The more a person uses drugs, the more their body begins to crave that, Sweet said. The cravings for the high they get are so strong, they will take anything they can to reach that again.

“They will chase that high until the day they die,” Sweet said.

Sweet also said that the withdrawal is so hard because it is a “miserable” experience.

Impacts on the brain

That’s why, she said, when someone is going through withdrawal, they are miserable, because their body doesn’t yet know that they have stopped.

“It’s going to take your body a while to know it’s gone,” she said.

And once they are off, the former addict will continue to remain susceptible to it, she said. They aren’t doomed, but they have to be more aware of potential triggers.

For recovering and recovered addicts, it’s important to remember the lasting changes to the brain. Those with addiction problems, those with head injuries to the front of their brain, and young teens and children share similar traits in that they have a lack of impulse control, foresight, self-guidance, motivation, problem-solving abilities and more. That’s because the front of the brain has been affected, or has not yet finished developing, as is the case in children and teenagers.

That’s why teenagers are at a high risk of getting addicted to drugs and why they are risk takers anyway.

“They can overcome that, but they have to work harder,” Sweet said. Just keeping a teen from trying an addictive substance until they are 25 makes a big difference in their brain development.

The brain of an addict will always be different, she said.

“They always have to be on top of it,” Sweet said. “The longer they are clean, the better they are. But we don’t know if they are ever fully back.”

Having a support system is one of the best things for a person overcoming addiction.

“With a loving, supportive family, their chances are better,” she said.

Therapy, too, can cause changes to the brain, and can greatly help addicts.

During the question and answer session, Sweet was asked what changes need to be made to the legal system to help addicts.

“It’s a slippery slope. If you rob my house, I don’t care what’s wrong with your brain, you need to be punished,” she said, but added the addicted don’t have the same moral compass as those who aren’t.

Rehabilitation, she said, is far better than jail — in some jails, drugs are more easily obtained than on the street. Long terms, like two years, can help the brains begin to return to normal.

Sweet also said research is being done in children who had exposure before birth, after being asked how to help those children.

“The trauma in a child’s life looks like ADHD,” she said. Sweet believes the reason Kentucky has a high rate of children with ADHD, is because there are so many kids that are in unstable environments.

Bluegrass.org has started a program to working to ensure children in those environments are attending school, “where there are teachers who are supportive, warm and nurturing and their brain can have time to develop and not have that kind of trauma, and so that will be more people in their life that can be supportive.” They are helping the parent get away from abuse, try to get clean, anything they can to ensure that the children are going to school.

“There’s so much trauma associated with kids born in families of addiction, that it’s hard to tease out what is just chronically being on the edge of not knowing who’s going to scream at you next or when your next meal’s going to be versus they got exposed to some chemical when they were in their mom’s belly,” Sweet said.

After a group discussion, Cay Shawler — a certified psychologist, recently retired from the Danville Bluegrass.org office — spoke on how parents can talk to children.

Shawler compared the need to take more drugs to being on the interstate, with no stops in sight and needing to go to the bathroom so badly it is all you can think about. That’s an explanation most people can understand, she said.

Shawler also shared the importance of being supportive.

“Don’t be afraid to be tough,” she said.

She also said parents “don’t have to know everything,” and gave pointers on how to talk to children about drugs as early as preschool. It’s important, she said, to be willing to listen — rather than react too quickly — when talking to them.

“You don’t have to get it all right the first time,” Shawler said. “Just start the conversation.”

Kendra Peek/kendra.peek@amnews.com
Cay Shawler speaks to those gathered at the Boyle County Fire Department for the Protecting Our Kids: Drug Prevention is Everybody’s Business.