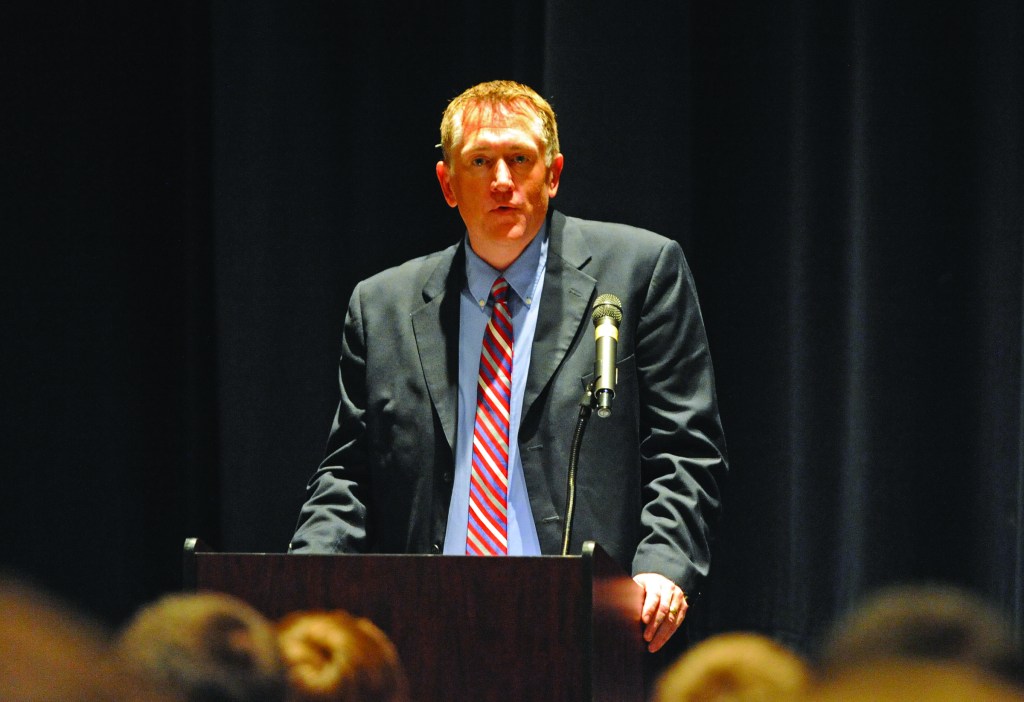 Kurt Young was introduced as Mercer County’s new boys’ basketball coach Friday at Mercer County High School.
The Titans made the announcement late Thursday night. Young has a wealth of coaching experience, most recently leading Hopewell High School (Va.) to the class 3A state championship. His last stint at the college level was as head assistant at Northern Kentucky University, and he previously spent time coaching in Hawaii, Arkansas, Georgia, Florida, Louisiana and Kansas. He’s coached for 20 years at the college level.

“We’re beyond thrilled to have a coach of his caliber take over our already existing, stellar program,” said Charlie Cox, Mercer’s assistant athletic director. “We believe that Coach Young is the right man to lead our Titans, to mold our young men to successful young adults.”

Cox introduced Young at the introduction ceremony, and Young spoke to his players and members of the media.

“I want to thank everybody, the committee, the administration, have been absolutely tremendous and has made our family feel welcome,” Young said. “That was one of the great things that really attracted me to the job. When we talked to everyone and did our research, they said that Mercer County was a great place. And not only were there talented kids, there were good kids. A place you can feel comfortable raising a family and a program that you can be proud of. That’s what the administration sold. Sitting down with the other coaches and administration, you could really see how much they care, and not about winning games, but the kids and the community.”

“From a basketball standpoint, we’re going to play a very exciting style,” he said. “We like to use the word ‘relentless’ a lot. We’re going to attack people from the first possession to the last possession, and that will not change throughout the game. We like to play a lot of people if they deserve that playing time. It’s going to be a very fun system to play in. We do a lot of individual improvement, we try to give our guys as much freedom as they can handle. I think basketball should be fun. The funner it is, the more freedom that you have, the more that you work for that freedom, it leads to good things.”

Mercer athletic director Donald Smith said that they had 13 applicants for the position, left by Josh Cook in August. They narrowed that down to five, then to three. But Young stood out because he reminded Smith of two of his other coaches — head football coach David Buchanan and girls’ basketball head coach Chris Souder.

“At one time I thought, when I was interviewing him, I was listening to a combination of Coach Buchanan and Coach Souder,” Smith said. “He brings that kinds of knowledge and wealth to the game.”

Smith said despite Young’s impressive resume, he didn’t talk about the past. Smith asked applicants about what it’d be like coming off an historic season, and Young’s response was perfect.

“He said, ‘what’s that mean? This is a new season,’” Smith said. “That was the answer I was looking for.”

Young said he hopes his players grow as individuals on and off of the court. That’s his main goal.

“The most important thing that we’re going to do is we’re going to hopefully help you grow,” he said. “My main job and my main goal for this program is for each one of these young men to reach their potential, whatever that potential is. If we can get them to reach their potential, the off the court things, the on the court things, they all take care of themselves.”