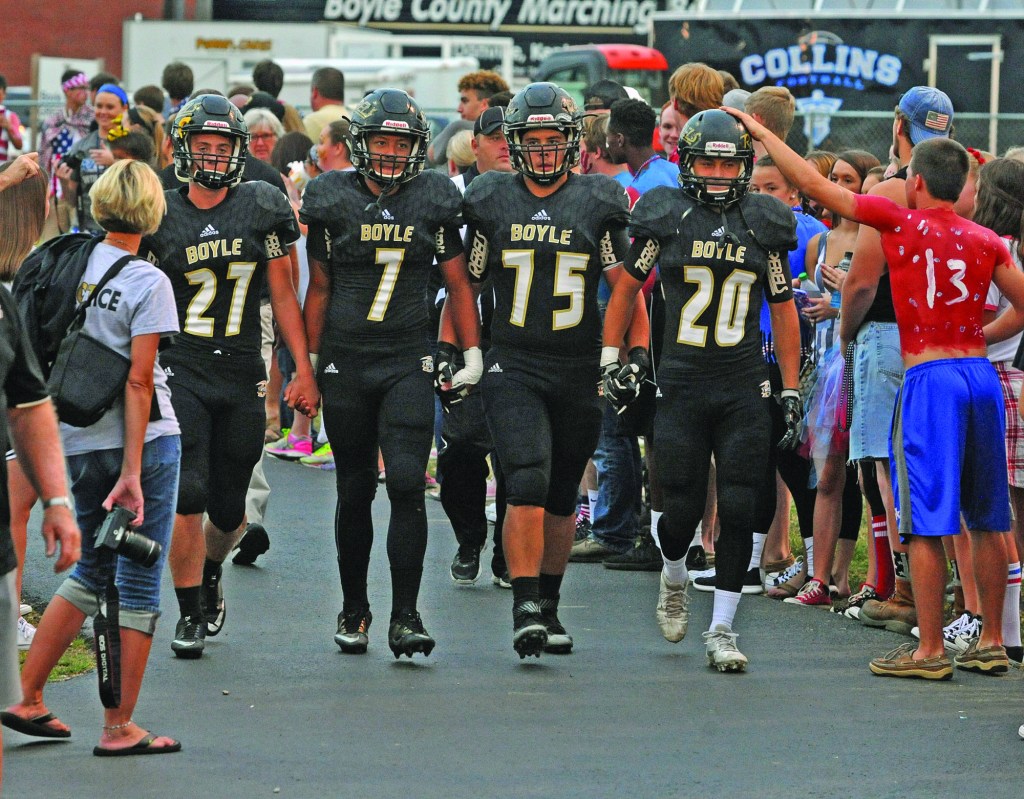 If I had a dollar for every time someone asked, “Whaddya think about Boyle County?” over the last three weeks, I’d be writing this from the deck of my new yacht.

OK, so perhaps that’s an exaggeration, but the Rebels have been a popular topic. And while that isn’t anything new, the reason for the conversation — an 0-3 start — was definitely different.

Don’t look now, but Boyle is 2-3 after demolishing Anderson County and Collins by a combined score of 90-43.

Two weeks ago, it was the quarterback rotation of Sam Tiller and Reed Lanter which got it done against the Bearcats. Friday, it was running backs Tanner Crawford and Gunner Ashburn who carried the Rebels. The two combined to rush for 300 yards and score five TDs against the Titans, who came into the game ranked sixth in the state Class 4A poll.

It was a huge rebuilding project for coach Chuck Smith coming into the season and the first three games — against North Hardin, Lafayette and Danville — didn’t give the Rebels much of an opportunity to ease into the season.

It’s not like Anderson and Collins are pushovers, so what we’re likely seeing is those new pieces becoming more comfortable in their positions and what’s expected of them.

I hate giving predictions, but here goes — Boyle finishes the regular season 5-5. And as always, no one will want to face the Rebels in the playoffs.

PATS BREAK THROUGH TO OTHER SIDE

Speaking of sending losing streaks packing, Lincoln County stopped two runs Friday. First, they snapped a four-game losing streak to start the season with a 47-25 win over North Laurel. Second was where the win happened — at Death Valley, breaking a streak of 10 straight home losses, including all of them last year.

Unfortunately for the Pats, their final five games are among the hardest run of games any team faces in the state — road games at Boyle County (2-3), Pulaski County (3-1) and Southwestern (3-2), and home games against South Laurel (3-2) and Rockcastle County (3-1).

There are teams out there which have six-inch thick playbooks, multiple audibles at the line and formations on top of formations.

Then there are teams like Garrard County, teams which do one thing and do it well. As I said in the game story from Friday’s 34-22 win over East Jessamine, the easy thing is predicting what the Golden Lions will do. The hard part is stopping it.

Jacob Foley might be one of the most underappreciated players in our area. And maybe that’s because he’s set the bar so high over his previous three seasons, but all he is is one of the area’s best running backs as well as one of the top linebackers.

It’s not often one player can make his presence felt so much on each side of the ball, but Foley does. Through five games, he’s rushed for 830 yards and 11 TDs while making 24 tackles with one interception and one fumble recovery.

Next up is Lloyd Memorial, which Lions coach Jerry Perry calls the most explosive team they’ll face this year other than Lexington Catholic. And after a bye week, it’s a trip to Boyle County and the start of the district schedule.

If I had given you one choice for which area team would be unbeaten at this point of the season, how many would have picked Casey County? Probably not too many outside of the Rebels huddle, but here we are with a 4-0 Casey team.

Last week’s 49-7 win over Washington County set a few new marks for Casey: Breece Hayes (310 yards, three TDs) and Austin Campbell (36 yards) combined to break the school record for passing yards in a game; do-everything Collin Miller touched the ball six times and scored five touchdowns with three receiving, two rushing and one on an interception return; and it’s the first time since 2000 that the Rebels have scored at least 49 points in consecutive games and the first time in program history they’ve scored over 35 points in four consecutive games.

At this rate, none of the next three opponents — Ballard Memorial, Bell County or Jackson County — should put up much of a fight, which leaves us with the Oct. 21 home game against Corbin to show us if this is simply a great regular season or if it’s more.