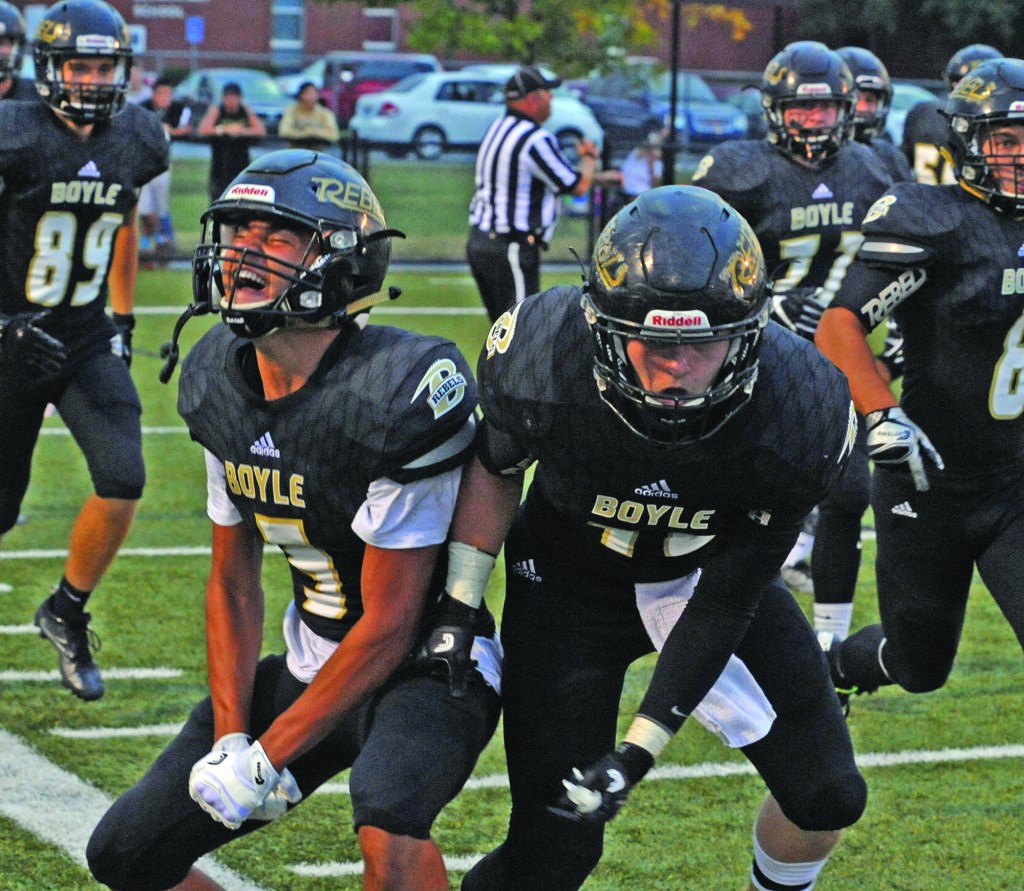 Lightning lit the sky and Boyle County lit up the scoreboard in a 49-30 victory against Collins.

The two teams battled through a delay lasting more than two hours after lightning was seen, but the Rebels’ offense didn’t miss a beat.

Collins’ speed caused some problems for the Rebels’ defense, but the Boyle offense was on a mission from the start. Gunner Ashburn and Tanner Crawford combined for more than 300 rushing yards and five touchdowns in the victory, while Boyle quarterback Sam Tiller threw for over 150 yards and two scores.

“It was really a nice win for us,” Boyle coach Chuck Smith said. “They’ve got a nice football team, they’re very explosive from an offensive standpoint. The way we had to handle that, our offense had to take advantage of their opportunities and put points on the board, and they certainly did a great job of that. Our special teams did a good job. I think our defense played much better after the break and competed with them a lot better. Came away with the win, and we needed that win. When you’re 1-3, you need every win.”

Boyle’s offense came out looking to prove that last week’s 41-point performance at Anderson County was no fluke.

On the first drive of the game, Boyle drove 53 yards in three plays for a touchdown in just 56 seconds, capped by a 31-yard run by Ashburn.

Collins’ first play from scrimmage was a pass deflected by Kaden Gervacio and intercepted by Evan Tarter.

Five plays later, Boyle had scored again, this time on a nine-yard run by Crawford.

Collins responded on its next drive, with quarterback JR Lucas finding Dalton Maggard for a 63-yard score. Lucas reversed fields on the two-point conversion to cut the Rebels’ lead to 14-8.

Boyle scored on its third drive of the night, a seven-yard run by Ashburn, with just 6:05 off of the clock.

Collins was driving when play stalled due to lightning, holding the ball on the Boyle 16-yard line. At 8 p.m. and with 3:39 to play in the first quarter, the two teams took shelter and waited out the storm. Play didn’t resume until 10:15 p.m.

“After the break, I think we made some adjustments, checked our character a little bit and I think some guys stepped up and started making some plays and playing like they were supposed to within the scheme of the defense,” coach Smith said.

Boyle held Collins to a field goal after the break, and the Rebels’ offense didn’t miss a beat. Their next drive took five plays and just 76 seconds, capped by an 18-yard run by Crawford.

The Boyle defense forced a turnover on downs to start the second quarter, but Tiller threw an interception on the next play after one of his receivers slipped. Collins would score on its next possession, cutting Boyle’s lead to 28-17 with 7:46 left in the first half.

Neither offense moved the ball well during the next six minutes, but Boyle found room to work as the clock was winding down. Tiller and Reese Smith connected twice on the final drive for 34 yards, the second being a 16-yard toss to the right corner of the end zone with 8.7 seconds left. Boyle led 35-17 at the break.

That same route resulted in Boyle’s sixth touchdown of the night, this time from 12-yards out. Reese Smith had more to do the second time, catching the ball over a Collins’ defender for the score.

Coach Smith said Tiller’s confidence in the past two weeks has been key for the Boyle offense.

“I think the last couple of weeks, he’s shown a lot more confidence,” coach Smith said. “He’s starting to feel better about himself and he’s throwing a better ball, but he’s also doing it in practice, too. From practice, it carries over to the games. I thought he did a good job tonight.”

Collins struggled to move the ball, but found fortune with a 24-yard pass on fourth down and goal to go.

Collins would score again, this time on a 97-yard pass from Lucas to Nasean Roseberry. Boyle coaches were upset with the officials, who waved off a penalty that would have brought the touchdown back.

Collins had quietly cut the Rebels’ lead to a two-possession game, trailing 42-30 with 8:40 remaining. Boyle’s offense didn’t answer on its next possession, but Reese Smith made a critical interception to end the next Collins’ drive.

Crawford would capitalize, scoring from 34-yards out to give Boyle a 49-30 lead. He received significantly more carries in the second half, giving a break to Ashburn, who was playing both ways. Crawford finished with 22 carries for 203 yards and three touchdowns. Ashburn finished with 17 carries, 107 yards and two scores.

“We’re asking a whole lot of Gunner,” coach Smith said. “We’re playing him on offense, then we’re playing him on defense full time. We’ve got to give him some breaks, and Tanner stepped up to that calling, and he obviously did a nice job tonight. He’s been doing a good job.”

Collins’ final hopes were squashed by Reese Smith once again, who grabbed his second interception of the night on the Titans’ next drive. Boyle ran out the clock for the victory.

“He’s one of them guys that love to be in the middle of the prime time,” coach Smith said. “He loves to make those plays to help his team win. He’s got a knack for it. He does a great job, he plays like a senior and he’s only a freshman.”

Boyle carries a two-game win streak into a challenging test against 5A Lincoln County, who won its first game of the season last week against North Laurel, 45-27.

“We’ve got a big game with rival Lincoln, and if we can get that game, it can even us up,” coach Smith said. “We can dig ourselves out of this hole a little bit.”