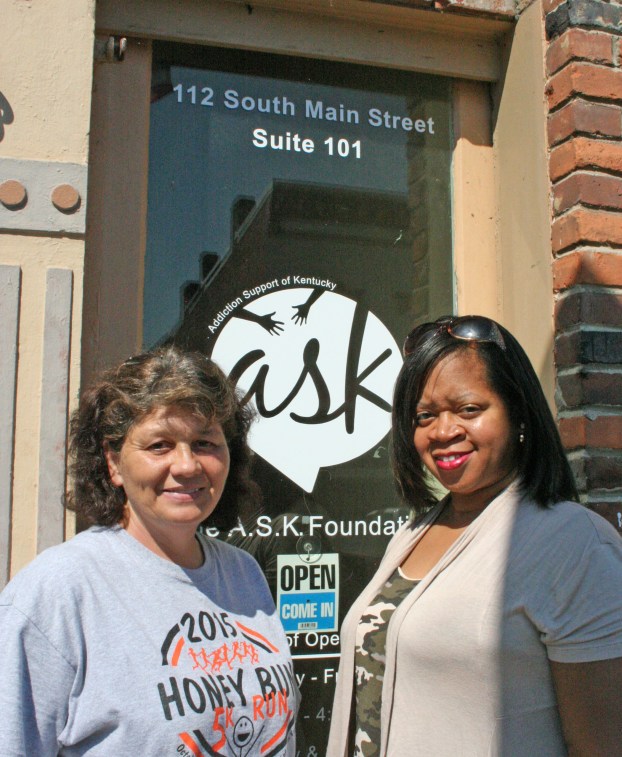 Kendra Peek/kendra.peek@amnews.com Ida Roberts, left, and Diane Green, right, two of the forces behind The Ask Foundation in Harrodsburg.

The ASK Foundation: Bringing help to those battling addiction

Volunteers are always needed at The ASK Foundation. They are also seeking four qualified psychologists and three drug and alcohol counselors.

To learn more about one of the workers with The ASK Foundation, read Monday’s People Feature on Diane Green, a former drug addict who now serves as the Foundation’s vice chair and a volunteer.

Sometimes, out of struggle comes life, and for Ida Roberts, founder of The ASK Foundation, that is true.

When faced with the addiction of a close family member, Roberts tried to help that person seek treatment. But she soon found it wasn’t easy getting help.

“I couldn’t find anyone to help me place … there wasn’t an organization to help pay for the funding or anything,” she said.

Soon, God showed her what to do.

“God laid it on my heart one day for me to do something about it. I sat in shock for a little bit and then I got started,” Roberts said.

In February 2014, she began researching what she needed to do. By that fall, she was attending meetings, developing community connections and getting the ball rolling.

“I just took all of that, along with the people God put in front of me. I make mistakes, I do things right, and I try,” she said.

In January 2016, The ASK Foundation, a 501c3 organization, officially opened it’s doors at 112 South Main Street, Suite 101, in Harrodsburg. The doors are not open everyday, as they try to keep the overhead low, but Roberts said anyone can make an appointment.

The name was another God-thing, Roberts said.

“The Lord did a little role play in my head. The first thing an addict has to do is admit they have a problem. The second thing they have to do is ask for help. And since we want to be around the state, ASK is Addiction Support of Kentucky,” she said.

The premise behind The ASK Foundation is that no parent should ever have to worry about their child not being able to afford the treatment they need to kick their addiction.

“It costs little-to-nothing for them to go into treatment. We have education programs for them, counseling, work programs,” Roberts said.

Currently, The ASK Foundation has 15 clients in treatment, nine in counseling, four in education programs, three in work programs and three in sober living programs. There are 21 going through the district courts, which the foundation helps them navigate. To help pay for those in treatment costs over $8,000.

“If we could get 10 people to donate $100 a month, we could cover treatment for four more individuals,” she said. It would have to be a recurring donation, as treatment takes four months to a year, depending on the facility.

There’s even a program in place to help transport someone if they need it.

“We encompass all of the excuses. We remove the barriers,” Roberts said. “We help with education, with sober living, with counseling — 99 percent of that is at no cost to them.”

Currently, Roberts is the chief executive officer and receives, begrudgingly, a pay of $258 a week, before taxes, “only if the funding is there.”

“If it’s there, I take it. If it’s not there, I don’t,” she said. “That was my rule and goal: no one, especially me, receives any time of financial compensation if it ever impedes up on someone’s life. To me, placing them in the recovery, or sober living, or counseling is impeding upon their life if the funding is not there.”

The foundation is currently at 10 percent administration costs, but Roberts said if it ever were to reach 20, there would be a pay cut, starting with herself.

She is also currently the chairperson of the board, but will be stepping down soon.

“We are sitting at nine members. When we reach 11, I will tax them with finding my replacement,” Roberts said.

“Within five to six years, I will tax them with finding a new CEO. I will probably taken it as far as I can take it.”

She continues to give all the glory to God.

“God told me to do this. He’s smarter than I am, I’m not that smart,” Roberts said.

About a month ago, The ASK Foundation opened an office in Anderson County. The goal is to make each office self-sustaining as much as possible.

The office in each county is supported by donations from that county. Roberts is working on getting grants to help, as well. Because of the structure, anyone from another county, such Boyle, that needed help from The ASK Foundation, would have to come with their own sponsor, as they can’t take the funding donated for Mercer County residents and put it toward a Boyle County resident. That’s another reason Roberts is working on securing grants, which can be evenly distributed to anyone.

Beginning the third week in October, The ASK Foundation will be taking orders for the Wreath For Giving fundraiser. Wreaths are $65 and three colors are available: white to represent sobriety, red to represent active using, and black to represent loss. On Dec. 1, the orders will close and wreaths will be delivered by Dec. 5.

In October, The ASK Foundation will also launch an overdose and relapse prevention program.

“Counselors and nurses will actually go to the clients, where they’re at, and work with them mind, body and spirit,” she said. In some cases, it will be while the person is waiting to get into a facility, in others, it will be for the six months after they have come out of recovery.

Roberts said she is most amazed at how God has made all of this happen.

“In the beginning, I said in three to five years for all of this. God said, ‘No, it’s now,’” Roberts said. “The problem is now.”

“He opened the doors and placed the individuals in my path.”

She has a new three to five year goal: to have an office and treatment facility in every county in Kentucky.

“It’s going to take a lot of collective effort,” she said.

But it’s important, Roberts said, because “we have a lot of lives at stake here.”

By KERRY STEINHOFER  kerry.steinhofer@amnews.com Boyle County Fiscal Court is requesting qualifications from a consulting service for an inmate confinement and... read more