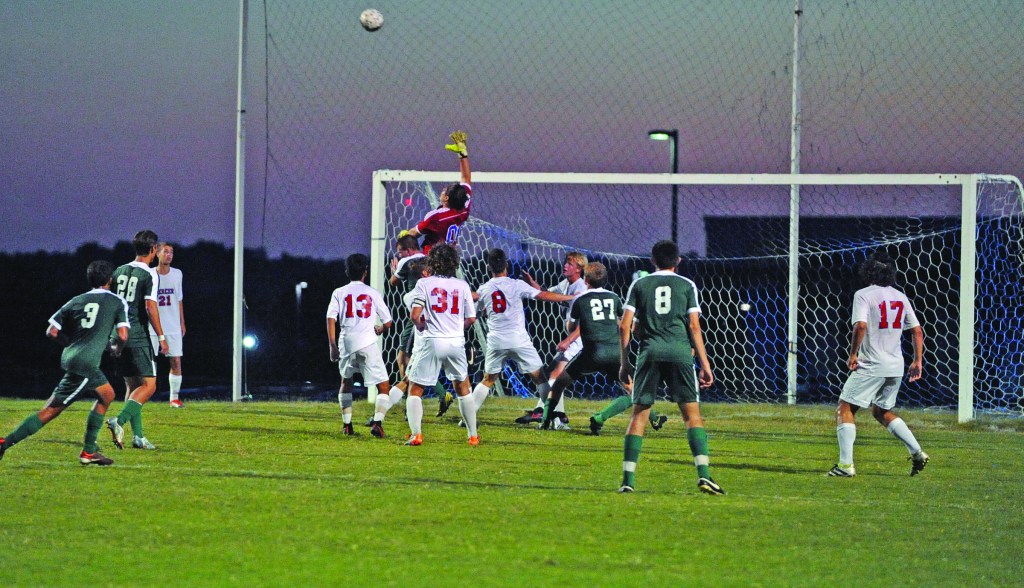 Matt Overing/matthew.overing@amnews.com Mercer County keeper Zack Phillips rises above the crowd during a corner kick against Western Hills on Tuesday. Phillips and his teammates kept their 10th clean sheet of the season in a 10-0 win.

This year, the Titans have been even better.

The Mercer boys’ soccer team had one of the top defenses in the state last year, giving up just 15 goals en route to a 12th Region championship. Despite losing three starters from that defensive line, Mercer is on pace to beat that mark this year. The Titans have given up three goals in 13 games this season. Through 13 games last year, they had given up eight goals.

Last season set a historic mark in the 12th Region — no team has conceded 15 or fewer goals in the last 10 years. Boyle County and Danville were close in 2009 and 2007, respectively, giving up just 17 goals.

With Tuesday’s shutout of Western Hills, Mercer has 10 this year — already good for a top 30 place in state history. The Titans’ six-consecutive shutouts to start the year is good for sixth-best all time in the state. Keeper Zack Phillips has 26 career shutouts, placing him in the top 10 all-time in the state.

But don’t talk about history to this team. They’re not worried about that.

“We take it game by game,” senior centerback Nick McClain said. “We say, if we can play the best that we can, play to the standard we want to, then we’ll get where we need to go. We try to keep a shutout every game and try to just play like we know how we can play.”

McClain replaced all-state centerback Sawyer Ransdell this year, slotting in next to fellow senior Chase Edwards — the lone returning starter in the back line.

“Nick played a holding center mid last year as a junior and played really good in the holding position next to Garrett (Dean),” Mercer coach Garrett Stark said. “This year, we had to find somebody to play the center back position with Chase, and Nick has really stepped up. He sees the field really well, he’s very disciplined on that back line, wins balls in the air, makes connecting passes. We’ve been really happy with his play on the back line.”

Other players have had to step up this season as well. Edwards picked up a red card and had to serve a suspension, and players had to be shuffled again.

“We lost three starters on our back line from last year,” Stark said. “We only had one returning starter, we had to rebuild this year. But the guys have stepped up and played really well on the back line. Chase has been out the last couple of games, so we’ve had to have a couple players drop into his position, and they really stepped up the last two games as well.”

McClain and Edwards are flanked by fullbacks, with Tyler Moberly, Juan Mercado and Austin Bartley most consistently lining up in the back. Phillips has started every game in goal this year for the Titans.

“Coming from last year, we put a lot of emphasis on our defense,” McClain said. “We did really well last year and we’re just trying to keep it going forward this year. Chase was part of it last year, and since we lost a couple of guys, we’ve had some good guys step up into the roles that we needed them to.”

It’s a team effort through and through for Mercer. The defense wouldn’t be as good as it is without help from the midfield, and the forwards scoring a region-high 55 goals this season relieves some of that pressure as well.

“It takes a team to do what we do,” McClain said. “It’s definitely not just us.”

Their success this season might come as a surprise to some, considering what the Titans lost from last year’s region championship team. It has even surprised Edwards.

“I have a lot of faith. Coming from last year, as fast as me and Sawyer were, I had a lot of trust in the defense,” Edwards said. “I was kind of scared this year that I wouldn’t know who to count on. We didn’t know who was going to play back there. But I have a lot of confidence in Nick, and even playing it back to Zack. … So far this season we’ve only let in three (goals), and we’re over halfway. We might improve on that, and I’m really excited. Losing all the guys that we did off of the back line, I didn’t think we’d be as good as we are this year.”

Having Phillips in the back has been a huge boost, although his nights aren’t filled with saves because of the wall in front of him.

Stark said he likes the way his keeper has played, but shutouts come down to a team effort.

With a near-perfect 12-0-1 record and eight games left in the regular season, the Titans have even more chances to solidify their defense as one of the best Kentucky has ever seen.

But they aren’t worried about that.

“We take every game one at a time,” Stark said. “We don’t put a lot of weight into that, you’ve got to play every team. Every team that steps onto the field wants to win each soccer game. We play one game at a time, we try to play to our highest level every time we step on the field.”