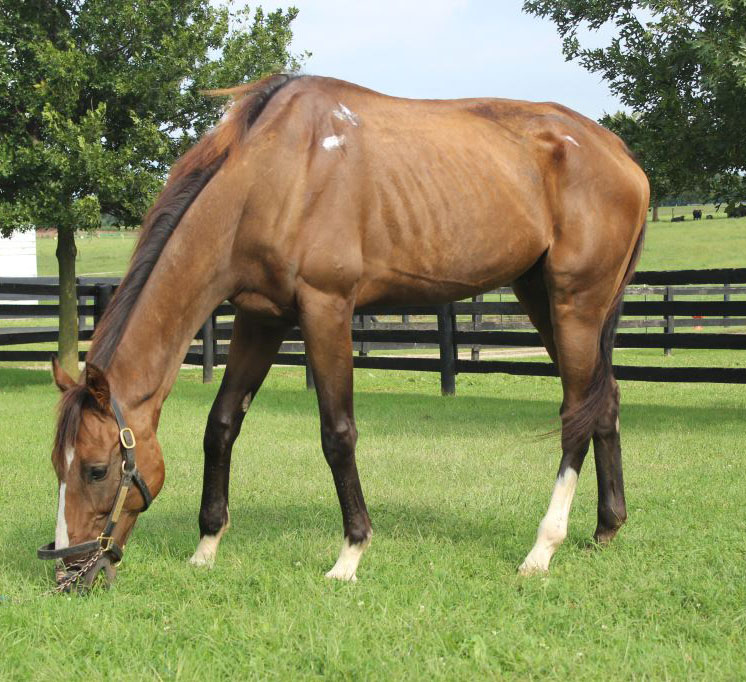 One of the 43 horses rescued from a Mercer County farm grazes Sept. 1 in Lexington. (Photo by Carrie Gilbert / Thoroughbred Retirement Foundation)

HARRODSBURG — The Mercer County Fiscal Court and the Kentucky Department of Agriculture have sued Maria and Charles Borell for ownership of 43 neglected horses.

The lawsuit filed Tuesday in Mercer County alleges the Borells should have to pay the fiscal court, KDA and other organizations more than $20,000 in itemized costs associated with caring for the horses, which were found on a Mercer farm June 9.

The suit also asks that the Borells be charged interest on all amounts owed and pay for attorneys’ fees and costs.

Charles Borell is the father of Maria Borell.

The suit notes that other people and organizations have been identified as owning or holding interests in the horses as well. Damages are only sought against the Borells.

According to the suit, agencies that have expended funds in caring for the horses include Thoroughbred Charities of America Inc. (more than $13,000), Sallee Horse Transport (more than $4,800), Rood and Riddle Equine Hospital, Hagyard Equine Medical Institute, Park Equine Hospital and Patterson Veterinarian Supply.

The lawsuit lays out a timeline of events as it relates to the horses.

The Borells transported the horses to the Mercer County farm where they were found on or before June 2, the suit alleges.

The horses were observed by Deputy State Veterinarian Bradley Keough on June 9, while he was at the Martin Lane farm for another reason.

Keough “observed that the horses … were without adequate food and water,” according to the suit.

“No caretakers were present. Stall buckets and troughs were either completely empty or contained small amounts of dirty water that was contaminated with loose debris, algae and mosquito larvae,” the lawsuit reads. “High temperatures made the lack of clean water especially dangerous to the horses’ health.”

Keough also “visually evaluated” the horses’ body conditions, ranking them “mostly in the range of 2 to 4” on a 10-point scale, with one horse scoring as low as 1.5, according to the suit.

“On the basis of the circumstances he observed, Dr. Keough determined that the horses were receiving inadequate care and declared that the horses’ owners had abandoned them,” the suit reads.

After Keough’s declaration, Mercer County Sheriff Ernie Kelty “took prompt action to provide bales of hay and fresh water to the horses,” the suit reads. “In the weeks that followed Dr. Keough’s declaration of abandonment, KDA and (the Office of the State Veterinarian) assisted Sheriff Kelty and the fiscal court in coordinating an effort to provide temporary care for the horses.”

In late July, KDA and the OSV posted photos and information about the horses on the online Stray and Abandoned Horses Database, which led to other people with interests in the horses coming forward with ownership claims, according to the suit.

The suit alleges that “despite Dr. Keough’s declaration of abandonment, the Borells persist in purporting to claim ownership or other interests in the horses.”

The suit states that the Borells, who have been sought by authorities in Kentucky in regards to the neglected horses, are now living at a Westbrook Hills Drive address in Syracuse, New York.

According to news archives, Charles Borell was arrested and charged with 43 counts of second-degree cruelty to animals at the end of June. He was released on bond about two days later. An arrest warrant is still out for the arrest of Maria Borell, but misdemeanor animal-cruelty charges are likely not severe enough to warrant extradition to Kentucky from other states.

Each of the Borells have been charged with one Class A misdemeanor for each horse found on the farm. A Class A misdemeanor in Kentucky is punishable by 90 days to 12 months in jail and a fine of up to $500 for each count. The maximum criminal fine for 43 counts would be $21,500.

Close to $25,000 had been raised for care of the horses on a GoFundMe website as of Tuesday.

KDA and Mercer County Fiscal Court asked for a speedy hearing in the case so the costs for temporary care of the horses can be brought to an end as quickly as possible. A hearing is scheduled for Oct. 12.