Admirals get back to business 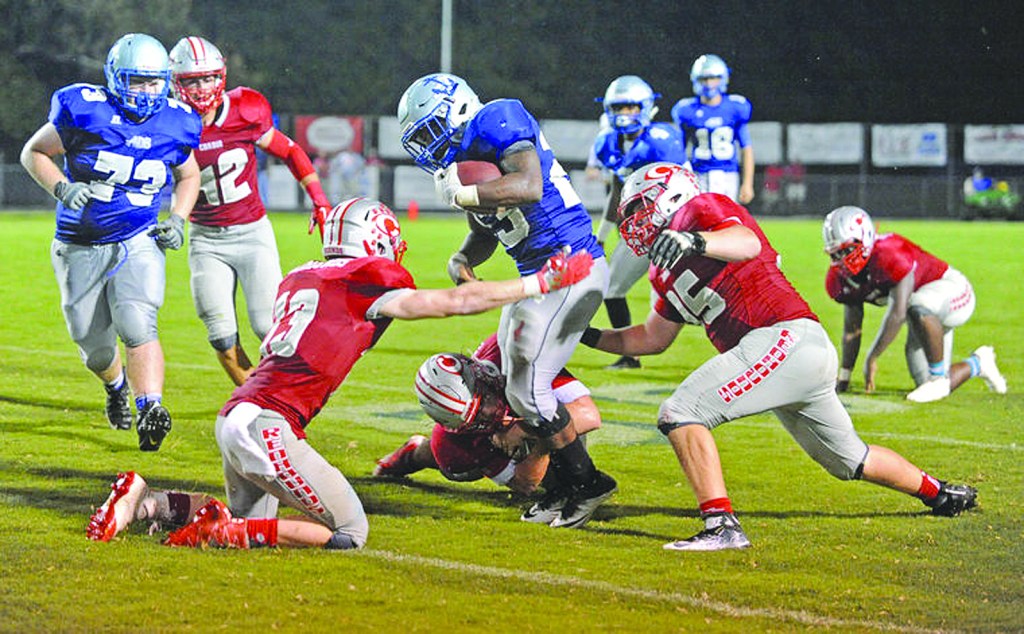 Matt Overing/matthew.overing@amnews.com Danville running back Donlevy Harris runs through tacklers during the game against Corbin.

The exchange from center to quarterback is one of the most assumed actions in football, so when things start going haywire, it’s blatantly evident.

In their last two games, Danville quarterback Zach Dampier has been on his toes — and in the air and on the ground — to corral errant snaps. The Admirals overcame the miscues in a win over Boyle County, but they helped contribute to a loss to Corbin two weeks ago.

The Admirals have had two weeks to work on the long snap, among many other things, during their bye. They’ll get to see if the ironing worked when they host Green County at 7:30 p.m. Friday.

Clevenger, who was a lineman but never a center, said that position is one of the two hardest on the offensive side of the ball, along with quarterback. In a split second, the center has to deliver the ball to the quarterback and get into his block. A misstep in either department could mean a sack, turnover or both.

“As far as physical demands of having to block and step and snap and do all that kind of stuff at the same time, it gets tough, especially when you’re in the gun as well,” Clevenger said.

“Our center (Keshawn Railley) plays both ways, he plays inside linebacker on defense as well, so I think fatigue plays a little bit of a part of it as well. … We’re figuring out ways to give him a break.”

The Ads figure not to have much troubles with Green, a team they’ve beaten six straight times by an average of 20 points per game. Last year, the Dragons managed 36 total yards in a 41-0 loss to Danville.

Instead of overlooking Green, though, Clevenger hopes his team has a bad taste in its mouth from the 28-7 loss to Corbin and uses that as motivation.

“What I hope is we have a bad taste from how we performed the last time in Admiral Stadium, so that should be motivation enough,” Clevenger said. “We don’t want our fans to think that’s what Danville football is about this year. … I think they’re hungry and itching to get back out there and play.”

Of their 262 yards per game, 215 come on the ground. Green averages 10 pass attempts per game.

“We’ve got to come to play,” Clevenger said. “We haven’t arrived, we’re not good enough to just show up. We need to come and play to the best of our abilities.”

On defense, Green gives up 36.2 points per game, but they average two turnovers per game.

It could be easy pickings for Dampier and his receivers. The senior quarterback has thrown for 1,008 yards and 13 touchdowns, with seven different receivers catching scoring passes. Dmauriae VanCleave and David Walker each have four TDs.

But the offense can only function if Dampier can get the snap in his hands cleanly.

“A lot of its is just when you get fatigued, you have to push through that,” Clevenger said, “and not let one thing get your confidence down or let one bad snap accumulate kind of like it did. There are going to be times when a snap is off here or there, just don’t let it be recurring.”