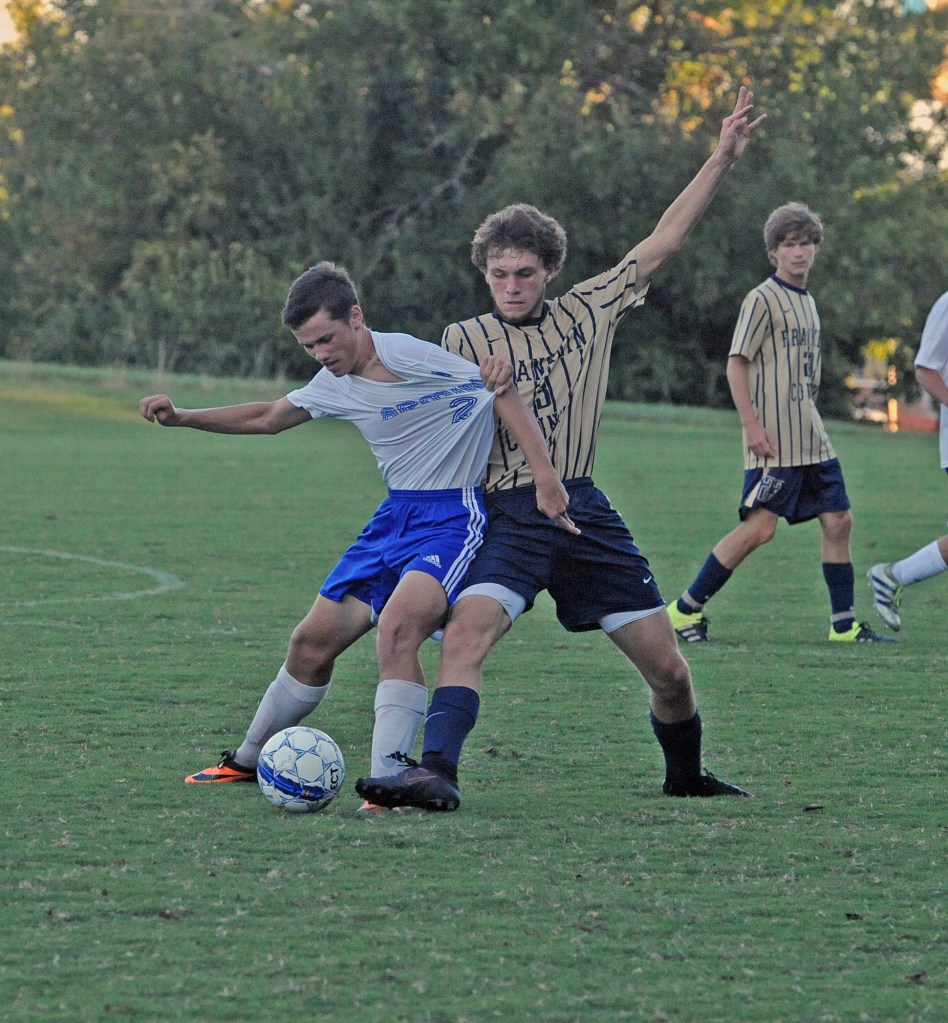 Daniel McAllister (2) battles for possession with Franklin County’s David McIver during the second half of Thursday’s game.

Danville coach Brent Beauman wanted a tough test for his team to prepare for the postseason.

That’s exactly what the Admirals got Thursday against Franklin County. The Flyers had the size and experience advantage, but Danville held its own for a majority of the game before a goal with just seven minutes left in the game gave Franklin the 1-0 win.

“I shook their coaches’ hand and told him, ‘That’s exactly what we both needed,’” Beauman said. “A good, hard, clean, fun game to get us prepared for the postseason.”

Danville keeper Claudio Rodriguez stayed active in the first half, coming out to prevent Franklin from threading a through ball past his back line on multiple occasions. The Ads’ struggled to retain possession but still had chances in the Flyers’ half of the field.

“I think it felt like they weren’t playing very well at times in the first half,” Beauman said. “But that’s a good team, and they play at a real fast speed, and we just weren’t making those adjustments. I thought we played extremely well, we had some people step up.”

The Admirals were missing leading scorer Gabe Cisneros and Sam Brunner, both of whom were out with concussions. Beauman said Cisneros is further along than Brunner in the concussion protocol and hopes to have them both back later next week.

Beauman said he’s proud of how hard his team has worked in the busiest stretch of their season so far.

“We’ve got a lot of young guys, and some older guys that are now filling in this year,” he said. “… They’re trying so hard, and I love the guys for it, but I think they think too much. They just need to make some things happen and read the game, the flow. Soccer, it’s never ‘Always do this, or never do that.’ It’s always situational.”

Danville’s offense perked up in the second half, with the Ads coming close on multiple occasions and forcing mistakes out of the Franklin defense.

“I told them at halftime, all of their opportunities are coming by using the middle and switching the point of attack, stuff that we’ve been preaching in practice,” Beauman said. “They’re starting to do it. We’re not breaking old habits, but we’re getting them to do new things and play new ways.”

With less than five minutes left, the Ads’ had their best chance to tie, with Cole Verhoven heading just past the post off of a Hayden Block deep throw in.

But the Ads couldn’t find the equalizer, with attack after attack falling short in the final third.

Beauman said he was happy with his team’s performance against an experienced 11th Region team.

“I thought they played well. They’re dead tired,” he said. “We’re not practicing tomorrow, we’ve got homecoming, so we’ll give them a break, come back fresh and finish up the season.”

The Admirals have four more games left in the regular season, starting with Madison Southern at home on Sept. 27.