Grimes: Public ‘bets against’ younger generation showing up to vote 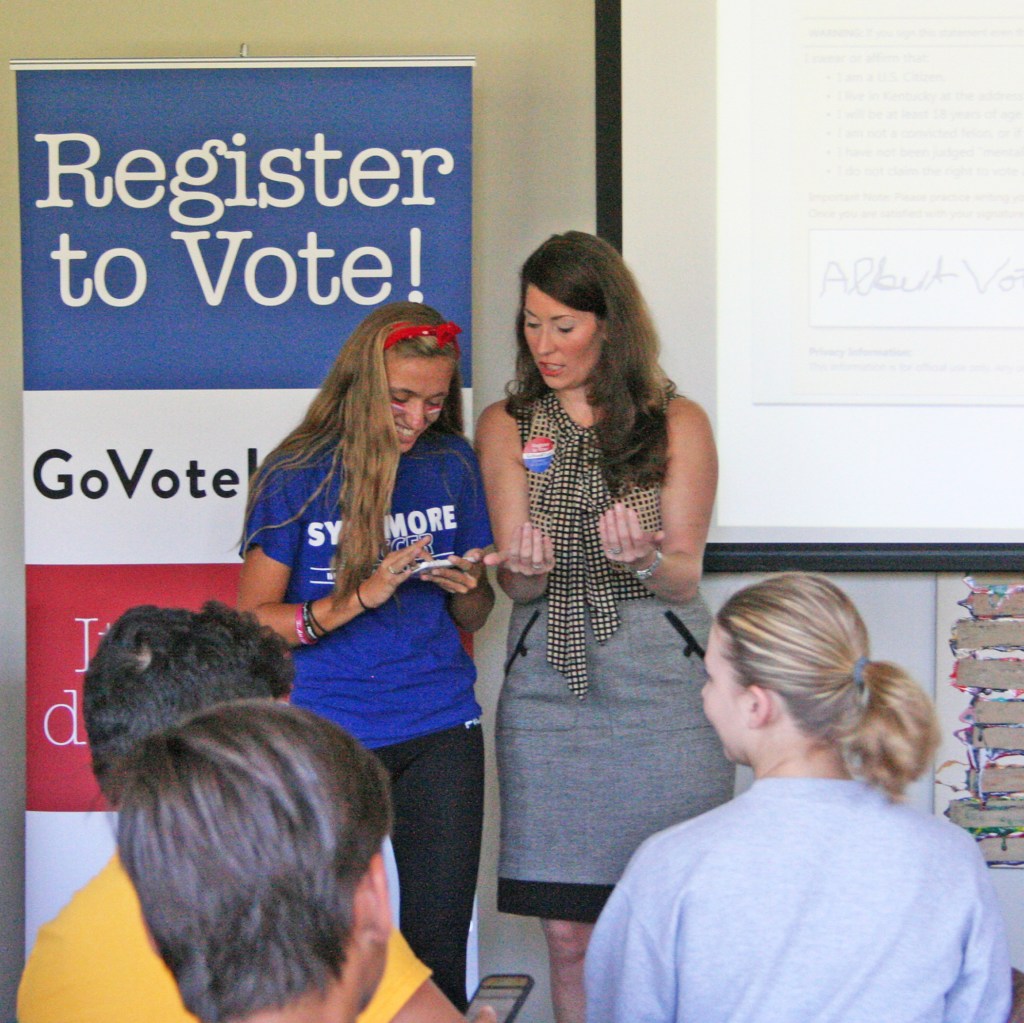 Danville High School and Centre College had an opportunity to meet Kentucky Secretary of State Alison Lundergan Grimes on Thursday, as she shared with students the importance of registering to vote and even helped a few through the process using an online registration system.

About 30 percent of Kentuckians who are eligible to vote have not registered.

“They consist of students and minorities. It’s a big reason why we took registration online, so it’s at your fingertips,” Grimes told students. “Hopefully you will help us send that message.”

To be eligible to vote, a person must be 18 by the general election, mentally competent, a U.S. citizen, and not registered to vote elsewhere.

Of the estimated 70 percent of Kentuckians who are registered, only about 20 percent voted in this year’s primary election — a low percentage Grimes said isn’t good.

“Do we want a minority of folks determining what’s going to happen for the majority of us? Don’t we want to participate in those decisions?”

Grimes said voting is a responsibility. She also spoke about the Bill of Rights and the various amendments expanding the right to vote and determining the minimum age of voters.

Grimes located two in the room who were or would be 18 by Nov. 8, the day of the General Election, who had not yet registered to vote. While they registered using the online system GoVoteKy.com, she walked the other students through it.

Anyone who has not registered can do so online, but must complete the registration by 4 p.m. Oct. 11. For those who can’t register online, they can still register at their county clerk’s office.

“The only thing about this that you’re required to do, that on paper is optional, is provide me your Social Security number,” she said. That’s to ensure the person registering to vote is the correct person, not someone with a similar name located elsewhere in the state.

“On paper, you’re never allowed to acknowledge that, there’s never room for us to make sure we can send you materials at the proper address; you can only give us your voting address. Here, you give us your voting address, you hit that ‘Add Mailing Address’ button and you give us the address where you want me to send you notification, where you want the county clerk to send that notification that you are indeed registered,” she said.

Kendra Peek/kendra.peek@amnews.com
Secretary of State Alison Lundergan Grimes talks to students from Boyle County High School, Danville High School, and Centre College about the importance of getting people to vote.

Voters can sign the card by using their driver’s license number or by digitally signing.

When the voter registration push launched in March, Grimes said they had hoped to get 25,000 Kentuckians to register or update their registration this year.

As of Wednesday, she said more than 40,000 Kentuckians have registered to vote or updated their registration using the online system.

Besides being easier on voters to register, the updates are practically instantaneous and are sent directly to the appropriate county clerk’s office. The statewide registration books close 28 days before an election, even with the addition of the digital system.

Same-day voter registration is not an option in Kentucky, but someday it might be, Grimes said. She is also working on extending absentee ballots to be permitted for anyone, not just those with extenuating circumstances; and for voter rights to be restored to non-violent offenders, once they’ve served their time.

Grimes, who is the youngest secretary of state in the nation, urged the students to take their opportunity to drive the vote, even before they have a chance to cast their own ballots, by encouraging those around them who are eligible to vote.

“The general public bets against you guys. They think, in the era of texting and tweeting and chatting and snapping, that you guys are the lost generation; that you will not show up, you will not be engaged. I don’t take that bet,” Grimes said. “I have faith in each of you that your microphones are going to be amplified and you’re going to be able to turn it up, not just this presidential election season, but as we progress.”

“My grandmother says it best. She’s now looking down from above, but she always said, ‘You cannot complain if you don’t show up,’” Grimes said. “If you don’t register, you can’t show up.”

The high school students were those in AP Government classes at their respective schools under Ryan New at Boyle County High School and Logan Scisco at Danville High School.

For the Boyle students, New said, they are focusing on civic engagement. The opportunity for students to meet an elected official was one that could not be passed up.

They were joined by politics majors, representatives of the Centre student government association, Centre Democrats, Centre Republicans, and students in STAND: The Student Service Initiative.

After the event, Grimes said she came to the campus because she believes “you can never start early enough.”

“We’re trying instill a culture of civic engagement and responsibility,” she said. “Being on our college campuses across the state is key and crucial to make sure we’re developing the next generation of folks to realizing that responsibility.”

To register or update your registration, visit GoVoteKy.com and click on “Register to Vote.” Registration closes on Oct. 11 and will not reopen until after the Nov. 8 election day. Eligible voters can also register at local county clerks’ offices.

Voters can use GoVoteKy.com to find their poll location, view a sample ballot and view candidate filings.

According to 2010 Census data and the 2016 Primary Election results from the Kentucky State Board of Elections: