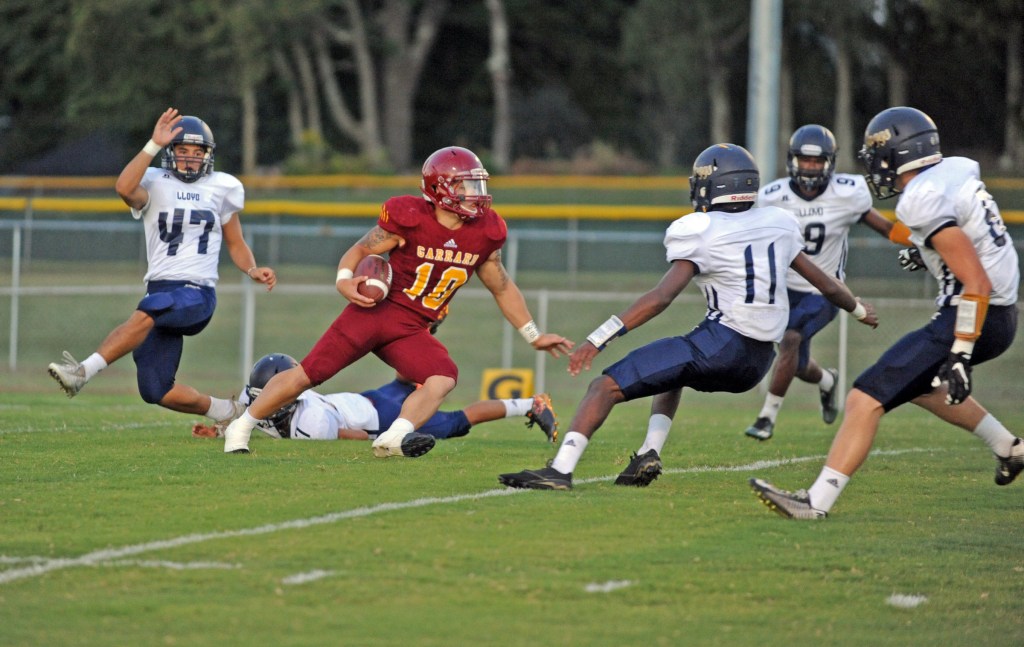 Matt Overing/matthew.overing@amnews.com Garrard County's Jacob Foley (10) looks for a way through the Lloyd Memorial defense during the first half of Friday's game in Lancaster.

LANCASTER — Garrard County squeaked out a victory against Lloyd Memorial on Friday.

The Golden Lions started slow, earning just three yards of offense by the time Lloyd Memorial had 13 points on the board.

But Garrard wore down the Juggernauts and came away with a 26-25 victory.

“I thought we battled hard, we dug a big hole and battled out of it,” coach Jerry Perry said. “We had to show some perseverance.”

Justin Durham scored the first touchdown of the night on the first drive of the game, a 39-yard run.

Lloyd Memorial’s second touchdown came on the Juggernauts’ third drive of the game, and it only took one play. Quarterback Jordan Fann hit Isaiah Voet on a 51-yard touchdown pass to go up 13-0. Garrard’s first two drives totaled six plays for three yards.

It looked like Lloyd Memorial would run away with the game, but the Golden Lions’ offensive line continued wear down the defense in a punishing performance.

Garrard’s third drive of the game showed that the Golden Lions’ run game was already wearing on the Juggernauts, scoring on a 13 play, 57-yard drive, capped by a one-yard touchdown run by Jacob Foley. Devan Logan’s two-point conversion run was successful, cutting the Lloyd Memorial lead to 13-8 with 8:08 left in the half.

Perry knew his team wouldn’t have much success throwing against the speedy Lloyd Memorial defense.

“If we line up and run 100 meter sprints, they’re going to have the top six,” he said. “It’s very difficult to keep them in front of you. We were just lucky. We’ll take it. Even with being lucky, I was happy with the way we played.”

Lloyd Memorial struck quickly after Garrard’s score, needing just one play to go 60 yards. Fann’s pass was nearly picked by Foley, but he tipped it in the air to Lashunn Townsend, who weaved through the Garrard defense to extend his team’s lead to 19-8 with 7:48 left in the first half.

Foley broke loose in the second quarter on a 36-yard run to set up his first rushing touchdown of the night, a three-yard run to cut the Juggernauts’ lead to 19-14.

Foley would get an interception to end Lloyd Memorial’s final drive of the half.

Garrard opened the second half with a score, a touchdown from quarterback Connor Isaccs to Anthony Justus on 4th and 7, with goal to go.  Perry said that was the play of the game, giving Garrard its first lead of the game at 20-19.

“It’s fourth down, (Isaccs) hits (Justus) on the slant, we get a touchdown,” Perry said. “That’s the biggest play of the game. I’m just tickled for them, they played well, they played hard. A lot of people thought we didn’t have a shot against this ball club. It was good to see that out of them.”

Isaccs only threw three times, going 2-for-3 for 66 yards. His second completion, a 59-yard strike to Jarreth Davis, set up a one-yard touchdown run from Logan.

“We have to throw when we want to throw. That’s what people don’t understand,” Perry said. “When we play this team right here, we don’t want to line up and throw it a lot. We want to line up and try to pound. The more we pound, the better chance we have. It takes a toll on you. Then, all of a sudden, you see people open. Then you throw the ball. Anthony Justus can catch anything. Jarreth Davis can catch, Josh Warren can catch. We don’t not throw because don’t want to throw, we throw when we think it will affect something.”

Lloyd Memorial scored on its next drive, taking 45 seconds to score. Durham had back-to-back 28-yard runs to cut the Garrard lead to one. The Juggernauts opted to try to take the lead, but failed the two-point conversion.

Lloyd Memorial recovered the ensuing onside kickoff at the Garrard 49-yard line. Eleven plays later, the Juggernauts had the ball at the Garrard three-yard line on fourth down with just 26.1 seconds left. They opted for the field goal and missed, securing the Golden Lions’ victory.

“I thought we got tired,” Perry said. “I thought we wore down, and we’ve got to do a better job of coaching. We’ve got to get other people in the game. Sometimes you get caught up in trying to win games and you should be substituting, because those guys are fresher. You tend to go with your No. 1s a lot.”

Perry said his team was fortunate at the end, but he loved the way his team played.

“I like my team. I’ve said that all year,” he said. “I think that we can get a lot better, I don’t think we’ve reached our potential at all, if our kids would just buy into that and realize it’s not just about your record. That’s aesthetics. It’s about performance and execution, things like that. We play hard, we always play hard. But we’ve got a lot of execution errors we’ve got to work on.”

The Golden Lions have a bye week before traveling to Boyle County for the first district game of the season.

“We’ve got Boyle. Enough said. We jump right out of the pot into the fire,” Perry said. “But we just have to go back to work, just do what we do. If we take care of our business, then everything else should go well.”