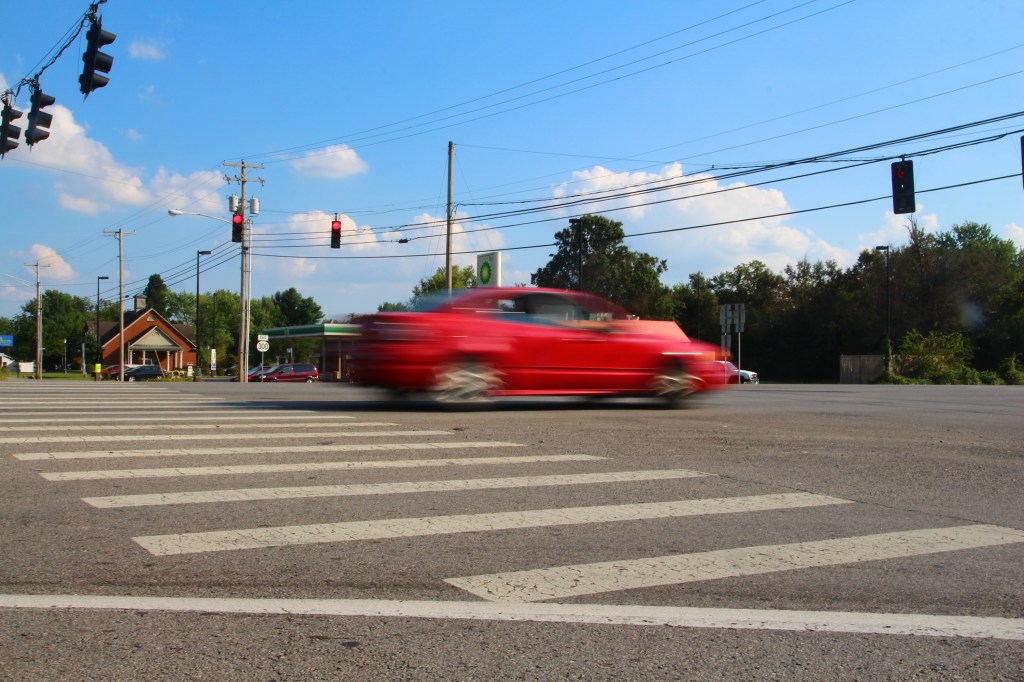 Ben Kleppinger/ben.kleppinger@amnews.comThe intersection of U.S. 127 and Shelby Street in Junction City has been the scene of many wrecks, including a fatal pedestrian collision earlier this year. Officials say they feel the intersection is unsafe due to poor lighting and heavy pedestrian traffic.

It’s a major road, the home of the World’s Longest Yard Sale, and divides the city of Junction in half. It’s also the site of frequent crashes, rear-end wrecks, and fender benders.

The intersection of U.S. 127 and Shelby Street was also recently the site where a young man lost his life. Officials fear left as it is now, the intersection will continue to cause problems.

On July 14, when 19-year old Junction City resident John Knight attempted to cross at the intersection’s traffic light with two others, he was struck by a southbound vehicle, driven by Phyllis Baldock, 68, of Liberty.

Knight was transported to the Ephraim McDowell Regional Medical Center in Danville, but did not survive his injuries.

At the time, a press release sent by the Boyle County Sheriff’s Office, which investigated the initial crash, stated “Deputies were unable to determine who failed to yield right-of-way due to conflicting statements given by different witnesses at the scene regarding who had the green light.”

An investigation into the incident has been handed over to the Kentucky State Police.

Since January 2015, there have been at least 10 wrecks in the area, according to data from crashinformationky.org, which is managed by Kentucky State Police. That number is not final — the fatal July 14 crash is at least one currently missing from the site.

At the Sept. 9 Junction City Council meeting, council member Sonya Kitchen brought up the issue of a lack of lighting at the intersection, after having spoken with the mother of Knight.

The road is maintained by the Kentucky Transportation Cabinet, meaning that any potential changes would have to go through that state department.

Junction City Council member Herschel Fletcher said the city might be able to install lighting nearby, which could help out somewhat.

“There’s one (light) pretty close, but it’s not lighting up that intersection,” he said.

Police Chief Merl Baldwin said he thinks it would help to use lighting similar to what is used on off-ramps on interstates.

“Really, truly, that intersection right there has a lot of pedestrian traffic,” Council member Kenny Baldwin said. Although there is a button to stop traffic for pedestrians, officials said it doesn’t always help.

Baldwin said he had called in the past and never been successful in getting a solution to the problem. Many of the council members said they would attempt to reach out to the Transportation Cabinet.

The discussion has also been a topic with the Safe Communities Coalition of Central Kentucky and the Boyle County Task Force.

Moderator Rollin Tarter said the coalition would like to support the city in efforts to make the intersection safer.

“We appreciate the response of the Junction City Council to make the U.S. 127 intersection safe for pedestrians,” Tarter said. “We hope that the Kentucky Department of Transportation will also make a timely and helpful response to assist the council’s efforts to prevent tragic accidents.”

According to Natasha Lacy with the Kentucky Transportation Cabinet, any agency is allowed to apply for a permit to place their own lighting at the intersection. With that, they need to include a map view of where they want the light poles and information on the type of lighting. The entire cost falls upon the agency seeking the installation. It is usually installed by the local power company, Lacy said. But requests can be denied.

Records indicate that the city has never filed for such permits, Lacy said. She would not comment on whether the state would consider evaluating the area to increase lighting.

• Light poles must be located between five and 15 feet from the “rightmost edge of the shoulder on both mainline and side-street approaches.”

• Lights must be mounted a minimum of 35 feet above the roadway.

• Lights can be mounted parallel to the roadway or diagonal to the intersection.

Kitchen said Friday that she would like to see the intersection better lit.

“I’m sure more light would make it safer for pedestrians,” she said.

Attempts on her part to reach someone at the state level have gone unnoticed, she said.

Kitchen said she was unaware of the permit option. It is something that would have to be discussed with other council members, she added.