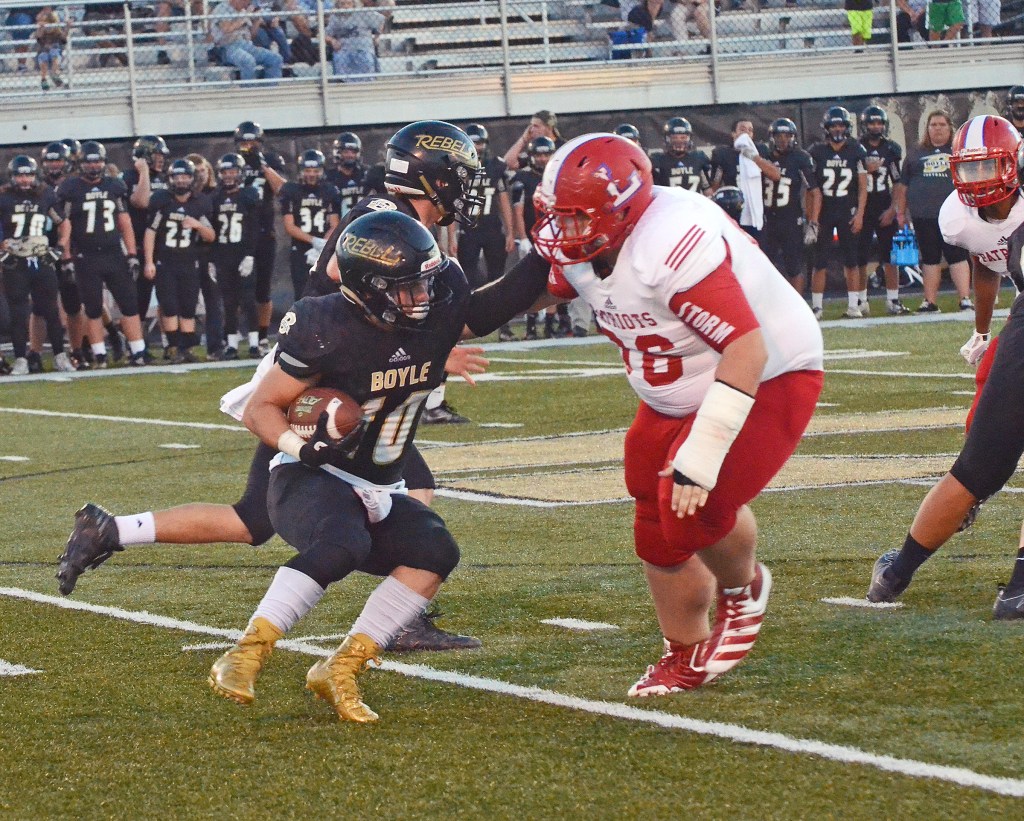 Nancy Leedy/nancy@theinteriorjournal.com Boyle County's Trintin Ashburn has no where to run as Lincoln lineman Koty Turpin gets past blockers. Turpin dropped Ashburn for a loss on the play. Ashburn would rush for 71 yards and two touchdowns for the Rebels in the 57-7 win.

Any hopes Lincoln County had of riding the momentum from last week’s victory over North Laurel to a second straight win went unrealized Friday night at Rebel Stadium.

It took a little over one quarter for host Boyle County to get going. But once the Rebels did, there wasn’t much the Patriots could do to stop them.

Boyle rolled up 305 yards of offense and scored six touchdowns in the first half to start a running clock as the Rebels rolled 57-7.

“I was really proud of them,” Boyle coach Church Smith said. “We’ve been practicing pretty good and I think our team’s getting better. And tonight they came out and they took care of business.”

The turning point in the game came with 1:04 to go in the first quarter. The score was tied at 7-7 and Boyle faced third down-and-8 when Tanner Crawford shook off Lincoln defenders in the backfield then ran 20 yards for a touchdown to ignite a string of 50 unanswered points by the Rebels.

“They took advantage of our inability to attack,” Lincoln coach Travis Leffew said. “We were in position but they were able to outrun us. Didn’t do a good job of swarming to the ball defensively. The guys have to get around the ball just like this team does.”

One quarter in, it seemed like the Patriots were ready to play — as evidenced by the 7-7 tie after the first nine minutes.

Landen Bartleson put Boyle (3-3) on the scoreboard first, capping off a 58-yard, six-play opening drive with a 30-yard touchdown run. Lincoln (1-5) also scored on its first possession. The 83-yard, 13-play drive included four first-down runs by Tra Carey, who led the Lincoln offense with 100 yards on 21 carries, and a first-down pass from Carey to Emmanuel Beasley. The drive culminated in the Patriots’ lone touchdown, a 2-yard run by Carey to deadlock the game.

The problem was Boyle just had one too many weapons.

The Rebels had six different offensive series in the final 3 minutes, 45 seconds of the first quarter and into the second quarter. Five of the six resulted in scores with three different players crossing the goal line.

Crawford put Boyle on top to stay with his 20-yard scoring run late in the first quarter. A 43-yard punt return by Reese Smith set the Rebels up with a short field at the Patriot 9 on their next drive and Trintin Ashburn, who finished with 71 yards on nine carries, capped off the drive with a 5-yard score.

Boyle quarterback Sam Tiller, who was 8-for-10 passing for 115 yards, showed his arm on the next TD, connecting with Nick Walker for a 28-yard scoring pass. Ashburn’s speed paid off on his second rushing touchdown, as he burst through the Lincoln defense and scooted 10 yards to the end zone.

Crawford took in the final Rebel score of the first half, running round the right end and going five yards for the touchdown. Reed Lanter hit Clete Hellyer on the two-point conversion attempt to put Boyle up 43-7 and start the running clock.

Leffew said Lincoln’s being young in experience hindered the team’s ability to prepare for the speed Boyle brought to the gridiron.

“In practice we don’t always get the speed look that we need on a scout team,” he said. “They are doing a really good job, but we’re young experience-wise. We don’t get that look in practice so when we come out here it kind of hits us quick and we have to play catchup.”

Lincoln didn’t help itself either, turning the ball over three times on fumbles, including the opening possession of the second half. The fumble came on the third play of the third quarter and Boyle’s Kagen Jackson got the recovery at the Lincoln 42. On the next play, Lanter, who was 6-for-7 for 95 yards, connected with Cameron Guinn for the 42-yard touchdown pass to make it 50-7.

Lincoln, which finished with 226 yards offense, 183 rushing, got inside the Boyle 40 twice in the second half only to turn the ball over on downs.

The Patriots stripped the ball from the Rebels as they drove inside the Lincoln 35 early in the fourth quarter. However, Boyle, which amassed 479 yards offense, 269 rushing, would strike one final time, with Grant Hotchkiss scoring on a 19-yard run with 11 ticks on the clock for the 57-7 final.

“Lincoln caused us some problems at times because they are big and strong and come off the ball so hard. But our guys were able to fight through it and get enough points to win the football game,” coach Smith said. “I liked the way we ended up the game, too. Usually, after we get a running clock, we just stop and we waste the rest of the game and get nothing out of it. I think we finished it the way we should have finished it.”

“A lot of the games early we beat ourselves, but tonight we hit a very disciplined football team in all aspects of the game, offensively and defensively,” he said. “They’ve been doing the same thing since 1992. They are a very good team. The best team we’ve played this year. To say 57-7 … I don’t know. But they did a great job of executing tonight.”