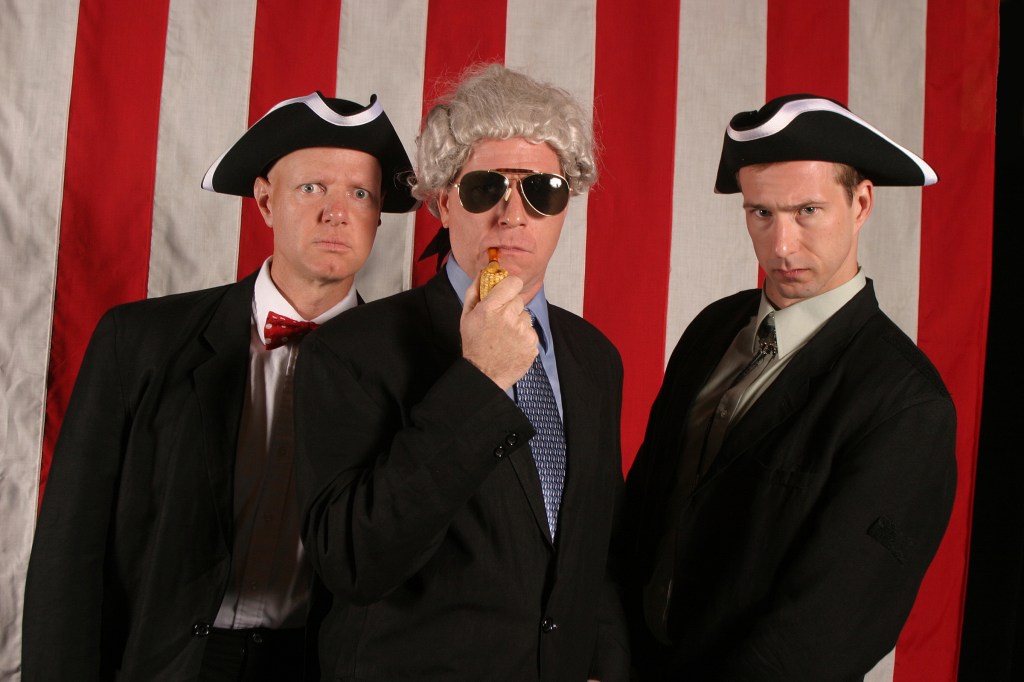 Just in time for election season, The Reduced Shakespeare Company presents “The Complete History of America (abridged): Election Edition” at Centre College’s Norton Center for the Arts on Oct. 1. This slapstick spin takes audiences through a roller coaster ride of the glorious quagmire that is American history. Guaranteed to confuse any voter, the “bad boys of abridgment” go from Christopher Columbus to Neil Armstrong, from George Washington to Barack Obama, even the Bering Strait to Baghdad, from the New World to the New World Order. Plus, the presidential frontrunners just might put in an appearance to answer audience questions.

“Why would the Norton Center present a tongue-in-cheek light-hearted spoof of American history just weeks before the U.S. Presidential election?” asked Norton Center executive director Steve Hoffman. “The easy answer is that we will all need a good laugh following the plethora of news stories, sound bites, debates and tongue lashings leading up to Election Day. The other answer is that the Norton Center has a long history of honoring our great nation through artistic programs, as well as through political debates both local and national. With a humorous, sketch comedy show, the Reduced Shakespeare Company will remind us why we are Americans, of the rights for which we’ve continuously fought, and that the United States is so great that we can still laugh at ourselves.”

The Reduced Shakespeare Company is a three-person comedy troupe known for their ability to “abridge” long serious subjects into hilarious, fast-paced comedies that keep audiences around the world laughing ‘till it hurts. Since the company’s start in 1981, The Reduced Shakespeare Company has created 10 world-renowned stage shows, two television specials, several TV pilots and numerous radio shows. The company’s itinerary has included stops off-Broadway, at the White House, the Kennedy Center, Lincoln Center, London’s West End, Seattle Repertory Theatre, American Repertory Theatre and Montreal’s famed Just For Laughs Festival, as well as performances in Israel, Australia, New Zealand, Hong Kong, Japan, Malta, Singapore and Bermuda. The company’s first shows, “The Complete Works of William Shakespeare (abridged)”, “The Complete History of America (abridged)”, and “The Bible: The Complete word of God (abridged)” ran for nine years at the Criterion Theatre, making them London’s longest-running comedies. For years the RSC had more shows running in the West End than Andrew Lloyd Webber. They were also funnier.

RSC is the brain child of Reed Martin and Austin Tichenor. Martin has written for the BBC, NPR, Britain’s Channel Four, RTE Ireland, Public Radio International, The Washington Post and Voguemagazine. His work has been nominated for an Olivier Award in London, a Helen Hayes Award in Washington, D.C., and San Francisco Bay Area Theatre Critic’s Circle Award.

Tichenor produces and hosts the weekly Reduced Shakespeare Company Podcast, which was named one of Broadway World’s Top 10 Podcasts for Theatre Fans.  He’s starred in the original productions of the nine RSC shows he co-wrote, performed with both the Oakland Symphony and the Los Angeles Philharmonic, and acted in the world premiere of “In The Garden: A Darwinian Love Story” with the Tony Award-winning Lookingglass Theatre Company in Chicago. On TV, Austin played recurring roles on “24,” “Alias,” “Felicity,” “Ally McBeal,” and “The Practice,” and guest starred as Guys In Ties on “The West Wing,” “The X-Files,” “ER,” “The Mentalist,” “Nip/Tuck,” “Gilmore Girls” and on many other hours of episodic television.

In addition to their work on stage, Martin and Tichenor have co-authored the e-book “How The Bible Changed Our Lives (Mostly For The Better),” as well as “Reduced Shakespeare: The Complete Guide For The Attention-Impaired (abridged),” published by Hyperion.

Mandy Prather is director of marketing and development for Norton Center for the Arts.