KSD elementary teacher wins achievement award, has shot at Teacher of the Year 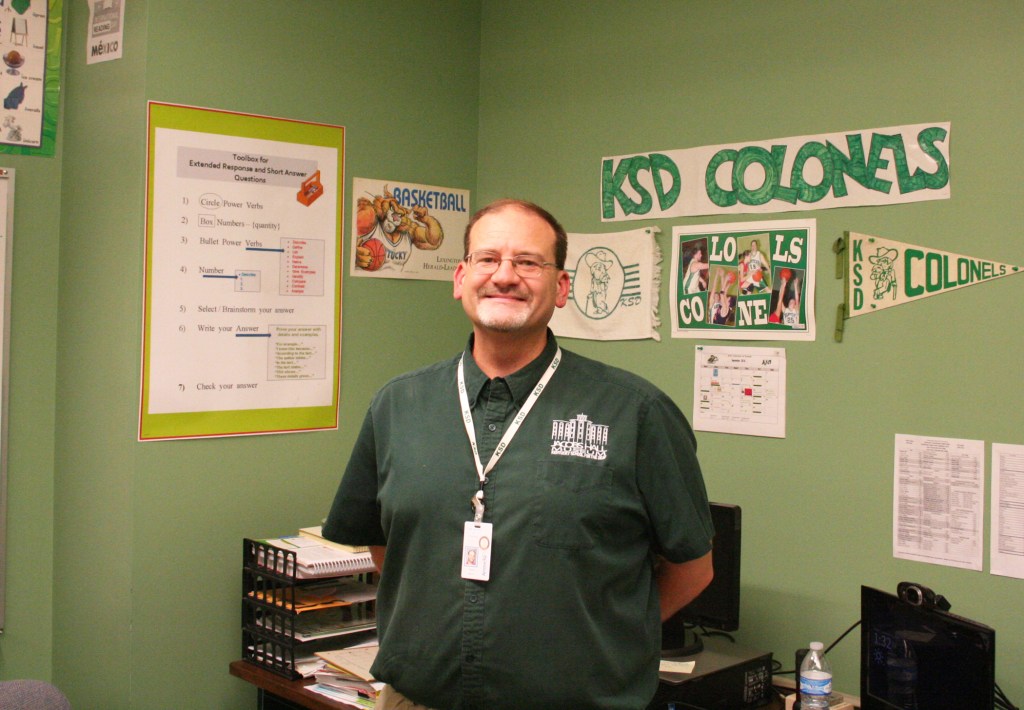 Kendra Peek/kendra.peek@amnews.com Byron Wilson, an elementary teacher at the Kentucky School for the Deaf is in the running for Kentucky Teacher of the Year after winning one of the 2017 Valvoline Teacher Achievement Awards.

A Kentucky School for the Deaf teacher is being recognized for his work in the classroom after being named one of the 2017 Valvoline Teacher Achievement Award winners.

Byron Wilson, a 19-year elementary teacher at the Kentucky School for the Deaf, secured the award and a chance to win the Kentucky Teacher of the Year award, which will be named in October.

Wilson was nominated by teachers from KSD last spring, which he calls a “big honor.”

“It’s really an honor for me to be noticed by my coworkers, to be acknowledged by them,” he said, adding that he thought all the teachers he works with should be receiving the award.

“We work together really well. We’ve all worked here for a long time, been together for a long time. I’ve learned a lot from the other teachers and those that have retired before,” Wilson said.

One of his role models was Debbie Martin, he said. Martin was his elementary department supervisor who retired several years ago.

“I learned so much from her. She’s one of those who really made me the teacher I am today,” Wilson said. “Her passion was for education with deaf children. She really had a huge influence on me.”

Wilson said he went into education because of the influence of his parents, Wendell and Dianna.

“When I was young, I wanted to be a cartoonist. During my high school years, I started thinking about teaching. Both (of my parents) were educators; the elementary school where they worked was like my second home,” he said. “That was a big influence on me.”

Originally from Leslie County, Wilson’s dad was a P.E. teacher who later became an elementary principal, spending 40 years in education, and his mom was a school librarian. Both are retired and still reside in his hometown of Helton.

Wilson attended the Kentucky School for the Deaf, graduating in 1989. He then went to Gallaudet University in Washington D.C., where he graduated in 1997.

College was a defining time — Wilson started in art because he was still interested in being a cartoonist, but eventually shifted gears.

“I decided it was too competitive,” he said.

He made the switch to teaching, trying math and P.E. before settling on elementary education.

“It’s a long process I found myself in,” Wilson said.

He then returned to KSD as a teacher.

“I always wanted to come back to KSD. I wanted to give back to the children at KSD,” Wilson said.

He now teaches second and third grades in all subjects, including reading, writing, math, social studies and American Sign Language. Wilson said it’s not tough to teach all the subjects “if you know your stuff.”

“You need to do your homework really often,” he said. “It requires a lot of planning and preparation, and you have to be creative, have to have creativity, too.”

He said the kids “definitely” keep him on his toes.

“It requires a lot of patience when you’re teaching, especially in elementary school.”

“Visually, they’re taking in that information through their eyes. We have to be sure they have their eyes on the teacher or other students when they’re speaking. They have to do that continuously, so we’re continuously reminding them in the classroom. That’s related to classroom management — a big thing here,” he said.

About a year ago, Wilson got married. He and his wife Michelle reside in Danville.

Wilson and the other Valvoline Teacher Achievement Award winners will learn who among them will be named Kentucky Teacher of the Year in October. He said he’s not nervous — at least, “not right now.”

“When it gets closer to the time, maybe, possibly,” he said.

Meeting Gov. Matt Bevin, Commissioner Stephen Pruitt, and the other official people at the ceremony could be a bit nerve-racking for him and the other recipients, Wilson said.

After being nominated, Wilson had to complete an application process, which included an essay with questions about education and his job as a teacher.

It can be tough sometimes, Wilson said, because so many students come in at varying communication levels.

“Sometimes we get students who haven’t yet learned to sign. We have to really teach them to look at us and look at other students. That way they can pick up the language,” he said.

“It’s a challenge for students. Some students come to school with a strong language base — they already have social language, they’ve developed that already, so they’re ready to learn and to develop their academic language. The real challenge is teaching those who don’t have both, the social as well as the academic basics.”

There are many deaf students who aren’t exposed to language before they arrive at KSD.

“We work hard to develop their social language and academic language simultaneously. It requires a lot of thought, planning and being creative,” he said.

“We always want our students to believe they can succeed in anything and be proactive citizens, so they can contribute to society.”

He’s confident that Kentucky School for the Deaf is where he should be.

“Elementary school is really where I want to be.”

In October, Byron Wilson, along with the 24 other Teacher Achievement Award winners, will learn who the elementary, middle and high school teachers of the year are, as well as which one of those three is the overall Kentucky Teacher of the Year winner. That person will have the opportunity to go to Washington D.C. in the spring to compete for the National Teacher of the Year award.

Last year’s Kentucky Teacher of the Year winner was Danville native and graduate Ashley Lamb-Sinclair, who was teaching at North Oldham High School.