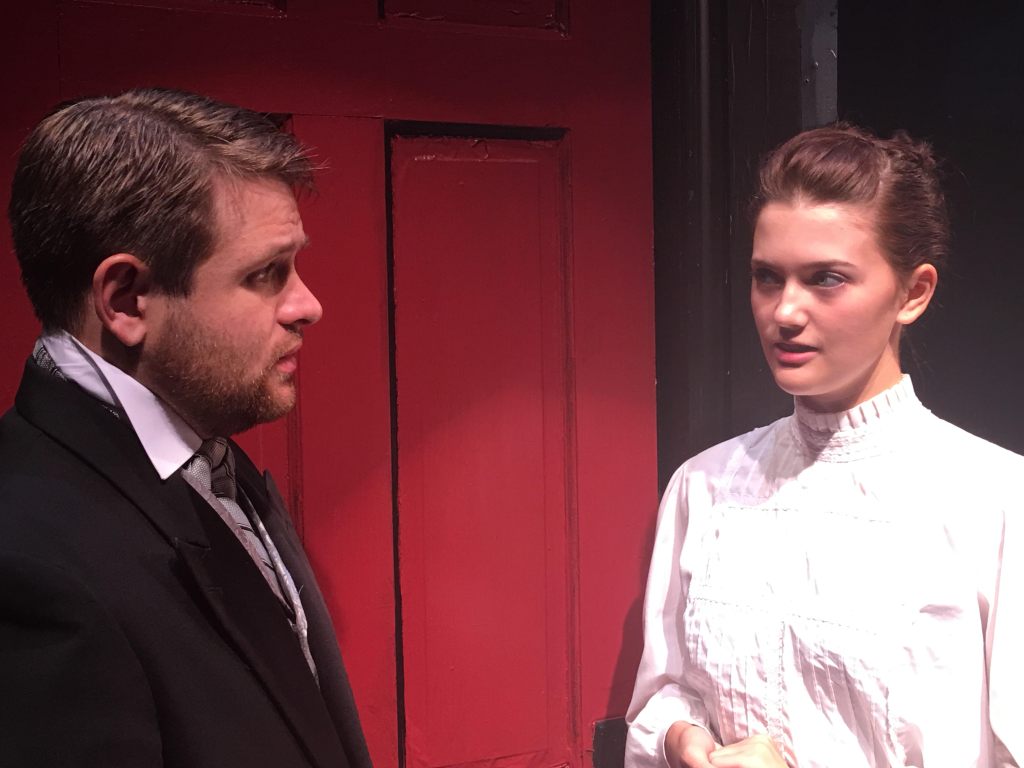 HARRODSBURG — Allan Barlow says “Dr. Jekyll and Mr. Hyde” has probably been adapted for the stage and screen more than any other story by an English writer. “With the exceptions of Dickens’ ‘A Christmas Carol’ and Conan Doyle’s ‘The Hound of the Baskervilles’,” he says.

Barlow, the managing director of Ragged Edge Community Theatre in Harrodsburg, says most adaptations tend to emphasize the science fiction aspects of the story, “… a brilliant, driven scientist manages through chemistry to unlock the violent brutish beast that — supposedly — lurks within each of us.”

Friday, the adaptation Ragged Edge has chosen to use will open, which takes a different viewpoint. Written by Jeffrey Hatcher in 2009, Barlow says the play asks: Has Henry Jekyll actually managed to sever man’s primitive, animalistic side from his civilized, intellectual side? Or has he simply induced psychosis in himself  by ingesting the tinctures and powders with which he has been experimenting?

“As it turns out, neither answer is a good one. Jekyll, like so many others of the Victorian era, believes that the primitive aspects of human nature could (and should) be strangled, choked off, stamped out.  He fails to see that these urges are part of what make a whole, functioning human psyche, and that if you try to crack it into pieces none of the pieces functions well on its own.”

Barlow says Hatcher explores this notion very cleverly by having Mr. Hyde, Jekyll’s violent hedonistic alter ego, portrayed by four different actors. “At times they all appear onstage at once — like voices in his head vying for dominance —fighting to be the one who gets to ‘come out.’”

Casting for this production went like a dream, he says.

“The right people all walked through the door on the night of auditions. We have a group of performers who have gotten along from the word ‘go.’”

He says the actors are a mix of Ragged Edge veterans like Than Cutler, who plays Henry Jekyll, and Michaela Blanton as Elizabeth Jelkes, as well as newcomers who are making their Ragged Edge debut.

“Brad Logan, who plays a variety of roles in the show including Edward Hyde, is appearing in only his second play ever. His first was as Pappy Yokum in ‘L’il Abner’ at the James Harrod Amphitheater this summer — a role which won him the Ragged Edge Jonesie Award for best performance in a supporting role,” Barlow says. “Not bad for a first-timer.”

Barlow says when directing a play, he likes to treat it like a book club.

“The first two or three rehearsals we will sit in a circle, read through the play  and then just talk about it …” he says, working through the script and discussing themes, motivations, plot points…

“Actors make much better, stronger choices onstage when they have a strong sense of the story they are telling, and are confident and clear about their part in that story.”

Barlow says the play will appeal to anyone who is a fan of classic English literature, and anyone who enjoys a spooky, slightly disturbing, good old-fashioned horror story.