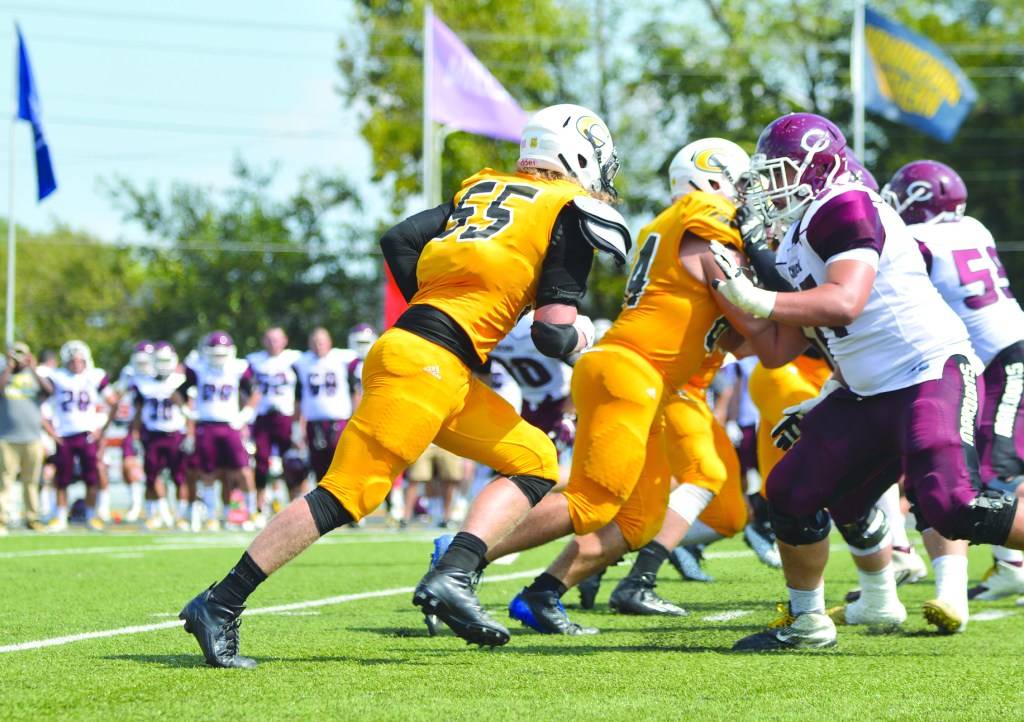 Jeremy Schneider/jeremy.schneider@amnews.com Centre senior defensive end Trey Yeager (55) comes off the line during the Colonels game against Chicago on Saturday at Farris Stadium. Yeager, from Boyle County, is one of the leaders of the defense and a big reason why the team is 4-0.

Coming out of Boyle County High School, Trey Yeager didn’t want to go to Centre College. Other schools were on his radar, but his mom convinced him to take a visit, if for no other reason than to use it as a comparison for other schools.

And it’s a good thing she did — Yeager is a senior captain for the Colonels and off to the type of start which could see him end up as an all-conference player at defensive end, or even more.

“The only reason I came on my first summer visit was I went to church with coach (Andy) Frye and coach (Tony Joe) White,” Yeager said. “I came on that (first visit), and I was like, ‘I like it,’ and then I came to a game. I came to a game, and I loved it; I saw the energy the guys had, the way they played. Then I came on an overnight (visit), I met the guys, had a blast and realized that’s where I wanted to be.

“I started off thinking I’m never going to Centre while growing up. Then I went through all that and I love it. I wouldn’t trade my decision to come here for anything in the world.”

Now a 6-foot-4, 228-pound senior, Yeager has already been named the Southern Athletic Association Defensive Player of the Week after totaling 11 tackles, 2.5 sacks and 4.5 tackles for loss in the season opening win over Hanover.

Yeager has 21 tackles (19th in the SAA), 2.5 sacks (third in SAA), six tackles for loss and three passes broken up. He’s been a key component in the Colonels (4-0) undefeated start; the defense leads the conference in yards per game (355.3), interceptions (nine), fumble recoveries (five) and defensive touchdowns (two), and they’re second with 20.5 points given up per game.

For Frye, the reasons Yeager is a special player leads to a long list.

“The best thing he does is he understands everything that’s going on behind him. It’s not just about his position, he can tell you what other people are doing,” Frye said. “Secondly, he does study it, he studies the people plays over. Thirdly, he’s a great pass rusher because he studies the tackle, he understands what he can set him up with, what are his best pass rush moves. And fourthly, he’s worked really hard to get to where he is now.”

Coming into this season, Yeager hadn’t played an entire schedule yet because of injuries. Still, he’s totaled 106 tackles and two sacks in his career. Frye is excited to see what can happen if Yeager is healthy for the full season.

Yeager and the Colonels face their biggest task this season, traveling to defending SAA champion Hendrix on Saturday. It matches the last two conference champions.

Being close to home, Yeager said he tries to make it to as many Boyle County games as he can, but traveling with the Colonels makes that difficult. Over the last few years, he was cheering on his younger brother, Drew, who joined Trey on the Centre roster as a defensive lineman this year.

Being from the area and as a college athlete, Yeager agreed it adds some responsibility to his role.

“You want to make sure you’re putting out a good image, that’s something I’ve always tried to do, put out a good image of myself, not do stupid things,” Yeager said. “If kids are looking up to you, and I know my brothers have growing up, for the kids that do look up to you, you want to set a good example for them.”

This is the last fall Yeager will pull on shoulder pads and a helmet, something he’s done every year since he was in second grade. It’s made him nostalgic and reflect on his past.

“That’s a long time. Every fall, that’s all I’ve known,” he said. “I’m trying to make the most of every opportunity I have available. I’m enjoying practice, enjoying being in the locker room with the guys, just trying to have as much fun as I can while I’m here.”

For Yeager, the perfect cap to his career would be the SAA Defensive Player of the Year award. It’s a goal he set after his sophomore year when Devon Freeman won the award.

“Devon was Defensive Player of the Year, and I came in the next year and told coach I want to be that,” Yeager said. “That’s been my goal ever since then. Ever since I got here, I’ve wanted to be the best I could be.”