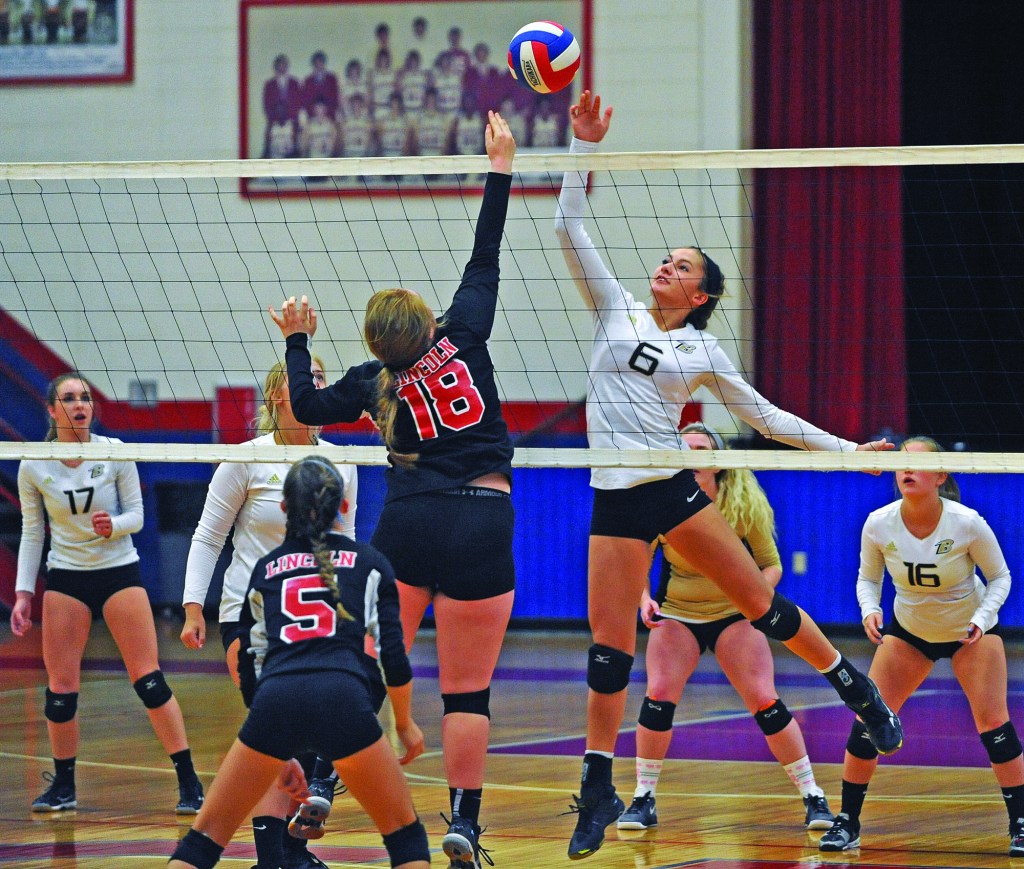 Matt Overing/matthew.overing@amnews.com Boyle County's Mya Van Steenlandt (6) and Lincoln County's Peyton Griffin go up for a ball at the net.

The Patriots are winners of five straight games, dropping just one set in that span.

Boyle’s win-loss trend has been leaning the other way. The Rebels have lost three straight and 10 of 12.

Matt Overing/matthew.overing@amnews.com
Brittney Kincaid (17) skies for a ball at the net during Boyle County’s match at Lincoln County on Tuesday.

“We have experienced a higher-caliber of competition then we’re used to having in our district and our region as well,” Boyle coach Andrea Craig said. “I think it’s gotten to the girls’ heads, and their mental game is struggling significantly because of that.”

Lincoln is a team Boyle has beaten twice this season, albeit in two tight matches (2-1 and 3-2). On Monday, Boyle lost to Casey County 3-1, another team Boyle had two close wins against.

“We’re on a roll right now, they’re playing really well together as a team,” she said. “They’re fighting, they’re scrapping. I couldn’t be more proud with how far they’ve come.”

During Tuesday’s game, Lincoln had an 18-11 lead in the second set before Boyle stormed back for the win. But Torres’ team didn’t let off of the gas.

“After we lost that set, I told them, ‘We’re 1 and 1. We’re tied. It’s not over, just go out there and keep fighting, make smart choices and don’t let anything hit,’” Torres said.

That pep talk worked. Boyle opened the third set 7-1, but the Patriots stayed the course and pounced out to a 19-13 lead before taking the set 25-20.

Torres praised her entire team’s effort in the win.

“They all had so much fight and hustle,” she said. “Savanna (Smith) had lots of blocks and kills, Jessie Wilson did well in our attacks and Taryn (Johnson) and Haley (Bowen) on defense. Then Jasmine (Whited), of course, my setter, we can’t hit without a setter. They all did amazing.”

The fourth set was all Lincoln, and Craig said her team lacked the mentality to fight through two more tough sets.

“It takes a team effort. Not just the six that are on the court, it’s the whole team,” Craig said. “It’s everybody, every player, every coach, every person sitting on the bench. You’ve got to have it 100 percent, and we just didn’t have that tonight. Do I think that we’re playing better? Yeah, we are, but I don’t think we’re emotionally or mentally there yet. I’m praying we can get there two more weeks from now.”

Cracking that mental barrier and getting back to the start-of-season form (Boyle won its first six games) is tougher than it sounds.

“I think we just need to get back in the gym and practice,” Craig said. “(Tuesday), we talked a lot about getting back to the basics and getting back to the fundamentals, why you play volleyball, and not letting things affect you to where it’s such a tragedy in the middle of the game because you make one error. Volleyball is a game of errors, you’re going to make mistakes, that’s how the other team gets points. They just need to realize they can only control themselves and their team, and they need to focus on that more.”

The focus will quickly shift to the district tournament that the Rebels will host in less than three weeks. With a win over the previously undefeated-in-district Rebels, Lincoln will look to take the 45th District title.

“This shows my girls that they can definitely take that district championship home,” Torres said.

Tuesday’s loss also might be a blessing for the Rebels, who have five games left on the schedule.

“Honestly, the reality of it is, and no coach wants to say it, but I think they needed to lose tonight,” Craig said. “I think they needed to lose to Lincoln County. Because Lincoln County and us, I think we’re the two best teams in the district right now. This is our third time meeting already this season. There’s potentially a fourth in there. That fourth game is still up for grabs, and we know we’ve got to come out swinging.”