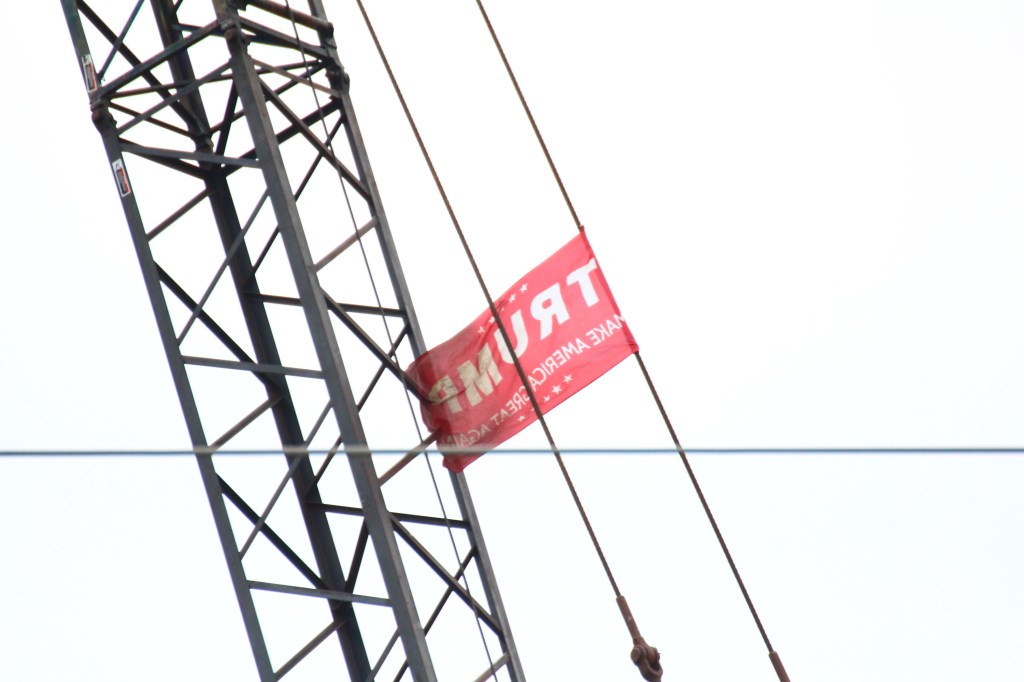 Ben Kleppinger/ben.kleppinger@amnews.comA flag supporting presidential candidate Donald Trump flies on a crane outside the Danville water treatment facility Monday. City Manager Ron Scott says the flag is protected free speech for the crane operator and does not represent an endorsement from the City of Danville.

A Donald Trump flag hanging off a crane at a Danville construction site has garnered attention from local residents, but remains within the crane operator’s right to free speech, according to the City of Danville.

Scott said the flag flying on the crane at the construction site of the Danville water treatment plant was brought to his attention “several” weeks ago and he took the issue to the city attorney.

Ben Kleppinger/ben.kleppinger@amnews.comConstruction workers talk in and next to a crane that displays a flag supporting Donald Trump at the Danville water treatment facility Monday.

“That right of the construction owner, operator, to express his opinion was covered by the First Amendment. Nothing in our contract precluded that action,” he said. “If it were even in our contract, it would probably be considered prior restraint and not constitutional.”

Only a few people — Scott thought three — have contacted him regarding the flag.

He stressed that the flag does not represent the opinions of the city.

“The City of Danville, as a non-partisan government, doesn’t endorse either party in national, state or local races,” Scott said.

“I did look into it. It’s erroneous to conclude that it’s flying there … represents anyone’s opinion other than the city worker. I would think the people in this community would appreciate the protection provided by the First Amendment of our U.S. Constitution,” he said. “It will cause people to, hopefully, reflect what the First Amendment means. Our right to express shall not be infringed by the government.”