Danville Board of Education hears from supporters of elementary reshuffling plan 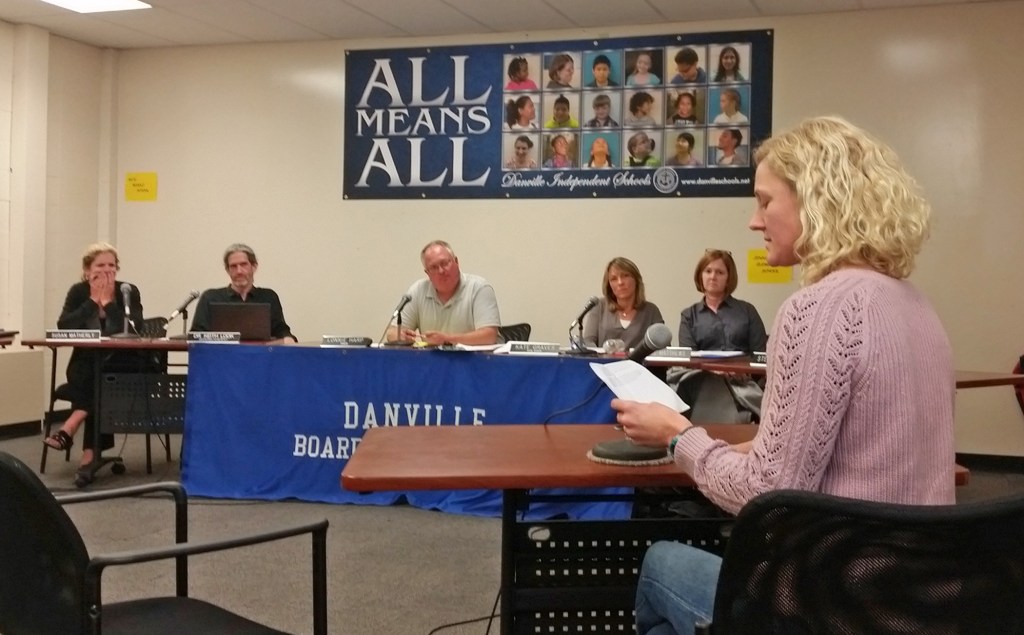 Kendra Peek/kendra.peek@amnews.com Amanda Goodwin addressed the Danville board regarding the transitions students will face with the future school plans

The three-hour special called Danville Board of Education meeting was to give the board the opportunity to hear about the process behind the Local Planning Committee’s reasoning behind the proposed plan.

“The board will not be taking any action tonight,” board Chairman Lonnie Harp said. “We will be listening to the people who are here. We’ve been getting emails from people — we welcome that. We’ll be taking some time to digest what we learn in here tonight. Each of us probably have some questions for the folks who have been advising this process. We’re just trying to get questions and clarifications on the process and hear from folks here tonight.”

The current LPC was established in April and met 11 times over the course of five months, Superintendent Keith Look said. The committee is formed of 20 members, including Look as a non-voting member, parents, teachers, school staff, community members and a planning and zoning official.

The LPC was charged with three tasks:

• make a determination of the particular locations of the preschool, kindergarten and first grade students;

• make a plan that maximizes the use of state money for development;

• make good use of the “second nickel” from the district’s nickel tax;

“Not every LPC has to make such concrete decisions, but from a timing standpoint, this was the task,” Look said.

• splitting into two preschool through first-grade centers at Hogsett and Jennie Rogers, with one of the schools housing the central office instead of preschoolers;

• making either of the two schools a preschool through first-grade center and the other a central office and a special programs center; and

• making either of the two schools a kindergarten and first-grade center, while making the other the preschool and central office.

“There are a whole host of permutations,” Look said to the crowd gathered, but added that these are the ones they narrowed their choices to.

Those choices were then examined by whether or not there would be cost to implement them and if there would be a need for continuing funds. Through this process, the proposed plan was selected, Look said.

Kendra Peek/kendra.peek@amnews.com
A crowd gathered in anticipation of Wednesday night’s Danville Board of Education meeting.

The proposed plan of converting Jennie Rogers into the central office and the home of the district’s growing preschool program and converting Hogsett into the district’s kindergarten and first-grade center is estimated at $8 million.

Amanda Goodwin expressed her concern that her youngest child would have to attend three different schools by the time she hits second grade.

“Transitions are hard on all of us; they’re especially difficult for young children,” Goodwin said. “The stress of these transitions affects young kids’ social interactions, their competence and their learning. These effects are magnified in our most vulnerable learners.”

While both said they loved the neighborhood school that they had the opportunity to experience at Toliver, Berry and Albright said they both supported the committee’s proposal.

“There are a lot of people on LPC that I highly respect, so I respect their decision, whatever it is. I hope that you will all move forward with their recommendation,” she said.

An issue with parking had been brought up regarding Hogsett, but Berry said that was never an issue for her, a Hogsett parent.

Hogsett principal Leo Labrillazo, who also served on the LPC, spoke in favor of the plan, citing the cost difference and noting the savings would be money the district might be able to use elsewhere.

He also echoed the statements that the south side of Danville needs that representation.

“I wish that this decision didn’t feel so much like there was going to be a winner and a loser, because the truth in the matter is that there isn’t a person in this room that doesn’t ultimately want what is best for the students, teachers and families of Danville Schools,” Labrillazo said.

Toliver kindergarten teacher Lisa Denny addressed the board, armed with a letter from kindergarten and first-grade teachers at Toliver and Hogsett, casting their support behind the plan, due in part to the larger classrooms at Hogsett Elementary.

Barbara Howe, a parent of a student from Jennie Rogers Elementary and a teacher at Hogsett, urged the board and everyone present to take their emotions out of the discussion.

The Danville Board of Education will have a working session on Oct. 10 at Bate Middle School and a regular meeting on Oct. 17 at Danville High School. Both meetings begin at 6 p.m.

Email addresses for all the board members are available online at bit.ly/2dcYiYT.

The next step is for the board of education to approve the Local Planning Committee’s plan and send it to the Kentucky Board of Education for approval, or to reject it and send it back to the LPC for changes.