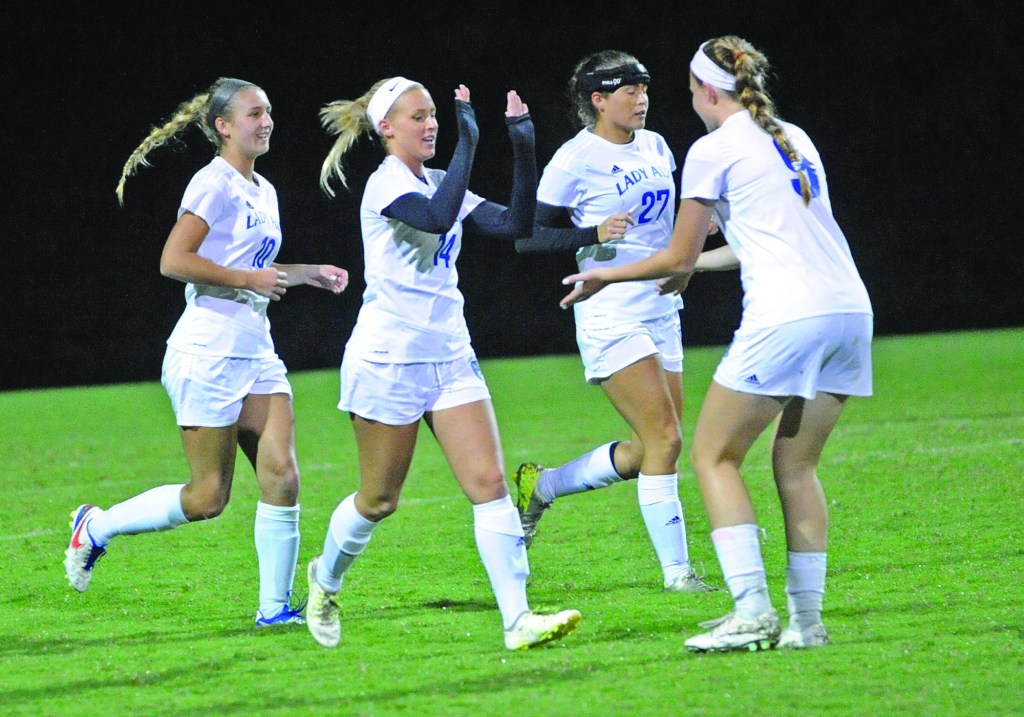 By Matt Overing/matthew.overing@amnews.com Danville goalscorer Katie Kirk (14) celebrates with teammates after her second score of the night in the second half. She scored two, Mackenzie Sandidge scored three and Kelsie Steber scored one in Danville’s 6-2 win over Lincoln County.

Mackenzie Sandidge had a senior night to remember.

The senior scored three of her team’s six goals in a 6-2 victory over Lincoln County on Thursday, ending a three-game losing streak for the Admirals.

“It’s always good to get a win on senior night and to send these girls off with a win,” he said. “These girls, they’ve been with me for seven years now, since I’ve had them through middle school as well.”

Danville has had a rough stretch of games recently, falling to Lexington Christian Academy on penalty kicks, losing 3-0 to top-20 ranked Woodford County, and losing late 2-1 to Mercer County.

But getting back to their winning ways, and against a 45th District opponent, was a good feeling for his team, Smith said.

“Dropping those three straight, that was tough,” he said. “It was good to get back in the win column tonight. Hopefully we’ll be able to continue that going into these last two games of the season and district play, which will run us right back into Lincoln. Hopefully we’ll just keep building, keep pushing and try to maintain that through our fall break, which always seems to present its own problems, having that fall break at the end of the season.”

Danville secured the No. 2 seed in the 45th District behind Boyle County with the victory, but the Ads were already locked-in to the 2-vs-3 matchup against Lincoln County in the opening round of the district tournament, which will be in Stanford this year.

Smith said he was happy with the way his team played on Thursday, but said they can still play better.

“Tonight, I don’t think we played our best,” he said. “The weather kind of throws a wrench into things a little bit. But our mindset is where it needs to be for us to get back on track right now.”

Katie Kirk scored two goals and Kelsie Steber scored another for the Admirals, who improve to 10-5-1 on the season. Emma Kaiser scored both goals for Lincoln on two long-range shots from outside the box.

Sandidge had to leave the game early in the second half due to a foot injury, but Smith said he’s hopeful that she’ll be back with proper rest.

“Mackenzie, she gets up on her left foot, she’s got an excellent shot,” Smith said. “Tonight, she played excellent. She had three goals and she had a couple that were just right off. You hate to see her have to leave after taking a little bit of an injury, but we’re going to give her the rest she needs so she’ll be back when we need her again.”

Compared to last season, Smith said he likes where his team is with two games remaining on the regular-season schedule. Danville fell in the championship match of last year’s district championship and went out in the quarterfinals of the 12th Region tournament.

“Looking at where we are now and looking at where we were last year, last year I think we were still trying to feel our way through. This year, the team knows exactly what to expect and what is coming. I think that they’re very prepared, and as a team, I think they’re all just ready to get started. We know that the 12th and the 45th District, obviously there’s a lot to do. But they’re ready for the challenge and we’re excited for what’s to come.”