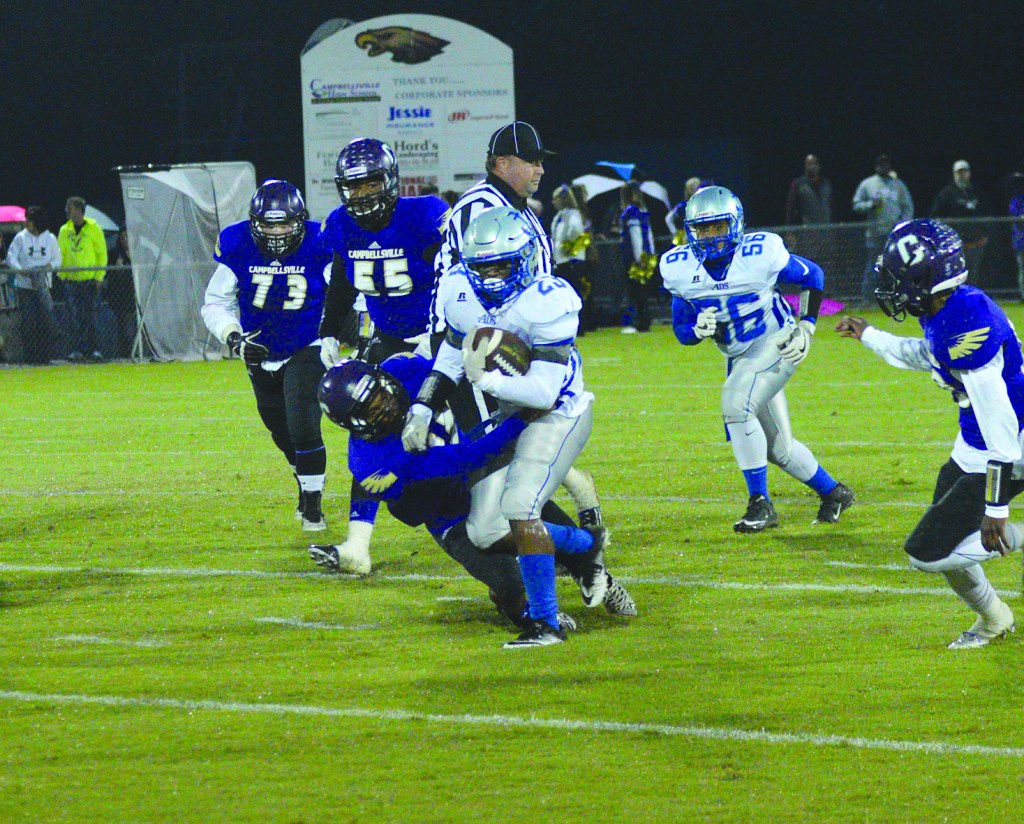 CAMPBELLSVILLE — Danville’s reputation as a historic football powerhouse naturally surrounds the program with higher expectations, especially after last year’s state semifinal appearance put the Admirals back into the conversation across the state.

So it can be understood why Ads coach Clay Clevenger left Friday’s 42-6 dismantling of Campbellsville feeling a bit underwhelmed.

“Campbellsville is playing really hard right now, but in the next couple, three weeks the competition level is really going to ramp up,” Clevenger said. “If we have this type of performance, then we’ll be the three seed in our district.”

Danville senior Ellison Stanfield admitted the Ads might have been looking a bit past the Eagles, but also acknowledged that’s a dangerous thing to do.

“I guess we weren’t hyped up and the moment,” Stanfield said. “… We try not to sleep on any team because any team could come out and play a good game any night.”

For the second straight week, the Ads put a running clock on their opponent — Donlevy Harris’ 40-yard scoring run and Dmauriae VanCleave’s 2-point conversion run gave Danville a 42-6 lead with 5 minutes, 29 seconds remaining in the third quarter. And the Ads out-gained Campbellsville 396-134, averaging 12.4 yards per play, while holding Campbellsville to negative yardage or no gain 12 times.

But there were uncharacteristic dropped passes, a three-and-out on the first series, a fumble to start their fourth series, and the defense struggled to get off the field on third down.

“Those are things when you haven’t done them all year, it makes you wonder if our concentration level is quite where it is,” Clevenger said.

While the statistics might show Eagles quarterback Tyrion Taylor gaining 24 rushing yards on 17 carries, his elusiveness gave the Ads headaches all night. According to Stanfield, it took a team effort to keep Taylor bottled up.

“Swarm the ball,” Stanfield said. “Everybody get to the football, run your feet until the whistle blows.”

There was plenty good to go around, though. Harris rushed for 125 yards on 10 carries, Dampier threw for 272 yards and had four total TDs, and the defense limited Campbellsville to 2.7 yards per play.

Danville showed its firepower on its second series of the game. Harris rushed for 15 yards on first down, and two plays later, Stanfield turned a short pass into a 36-yard scoring play with sharp cuts and moves.

The Ads went up 14-0 when VanCleave did what he’s best at — blasting past defenders on a 78-yard TD catch-and-run.

Taylor turned in the Eagles (2-5) longest play from scrimmage on the fourth play of their next possession, a 36-yard run right up the middle of the Danville defense. On the very first play of Danville’s next possession, Harris fumbled and gave Campbellsville some life.

However, Campbellsville gained a net total of five yards on its drive, and Dampier lofted a perfect pass to David Walker, who showed skill with the catch and footwork, for a 15-yard score to put the Ads up 21-6.

Dampier ended the scoring the half with an eight-yard run, scooping up a low snap and making something out of nothing, taking a lot of contact on his way to the goal line.

“Zach has worked really hard in the weight room, so he should be fine. He hasn’t gotten hit a whole lot, so you worry about that,” Clevenger said. “I think he tripped and fell into the guy is what happened to him running the guy over.

“He’s a capable athlete. We like him to sit back there and throw the football, do that sort of stuff. We don’t let him run the football. We could and probably will have to moving forward.”

Harris’ two third quarter touchdowns put the game out of reach. He capped off an eight-play drive with a one-yard plunge into the end zone for a 34-6 lead, and his burst up the sideline on their first play after retaking possession effectively ended the game.

“Once we get settled in, we can make plays,” Clevenger said. “Offensively after the first quarter, when we settled in, I thought we played pretty well. It was defensively, we’re not playing quite as tough as I’d like to see us play at this time of the year.”

But as Clevenger pointed out, the Ads have one senior on that side of the ball.

“You’re trying to speed up the maturation process of some sophomores, some juniors who haven’t played a whole lot before,” he said. “Last year, we had eight seniors who spoiled me. Kids want to be good, they want to do what they’re supposed to do, so we’ll get back in and work at it.”