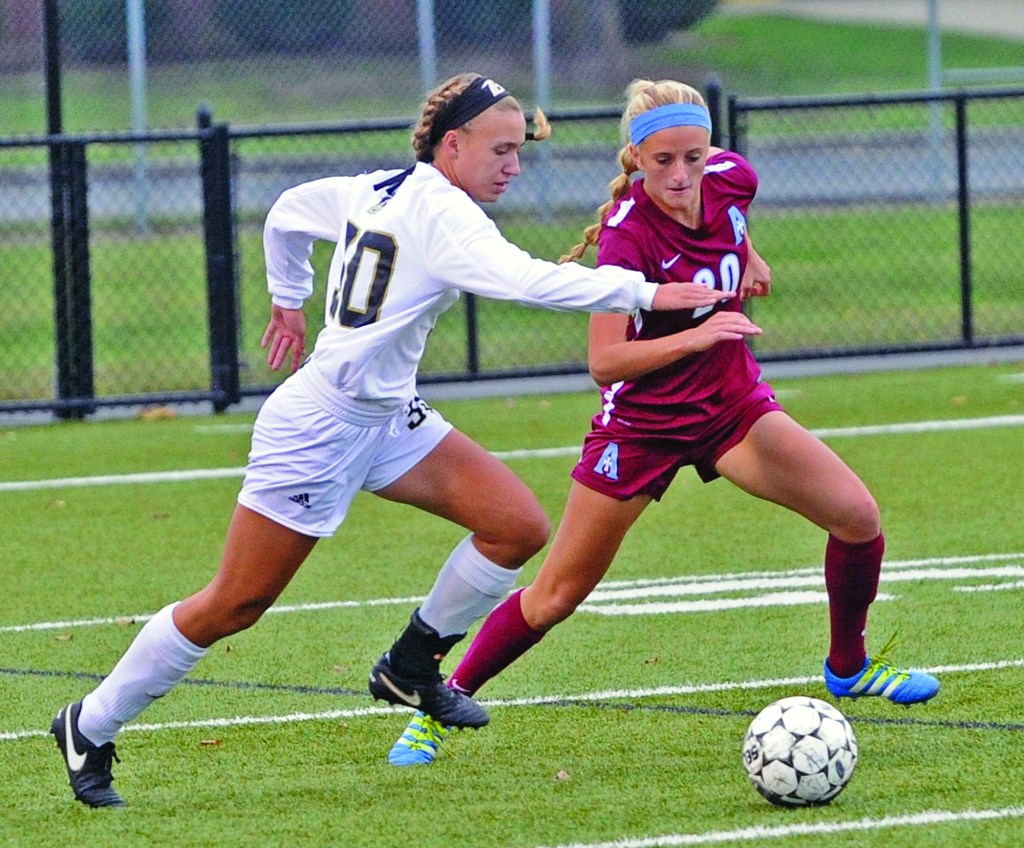 Matt Overing/matthew.overing@amnews.com Boyle County's Kylie Thompson dribbles past an Assumption defender during the first half. Thompson scored both goals in the Rebels' 2-0 victory.

Boyle County’s only loss this season came at the hands of a top 10 team: A 5-0 defeat at Sacred Heart.

Against Assumption on Saturday, the Rebels wouldn’t let that happen again.

Boyle, ranked No. 6 in the latest coaches’ poll, beat No. 3 Assumption 2-0 behind two goals from Kylie Thompson. It was the 10th win in a row for the Rebels, who improve to 19-1.

“We played with some energy and some passion tonight,” Boyle coach Brian Deem said. “It was a hard-fought game. I knew it would be physical, I knew it would be tough, and it was. We were able to capitalize on some mistakes and use our speed on the counter, then in the second half we did a really nice job.”

Thompson’s first goal of the game came in the 24th minute. Emmie Harris played a ball over the top of the Assumption defense, and Thompson blasted past the keeper who was caught between the ball and the goal.

Assumption had chances in the first half, but key saves from Sarah Burns and smart defending kept Boyle ahead 1-0 at the break.

The Rebels matched Assumption’s physicality, something Deem said knew would be coming.

“The seventh is always a traditionally physical region,” Deem said. “I think it’s helping us, more so than them, because that’s common play for them. To come out here and play physical like we did, I can’t complain about it. We were able to get some quality goals, that’s a quality team and it’s a quality win for us.”

“She did a great job, was able to recognize and use her speed, pop the ball around and finish tonight,” Deem said of Thompson. “In big games, your big-time players have got to come in and come through, and we’ve got to do that. When it comes to big games, lights are on, you’ve got to produce.”

Deem noted Harris and defenders Emily Knetsche and Becca Tarter as players who did a “great job.”

The win pushes Boyle further ahead in the 12th Region win/loss standings, but that doesn’t mean much to Deem and his team.