Rebels improve to 6-0 for first time 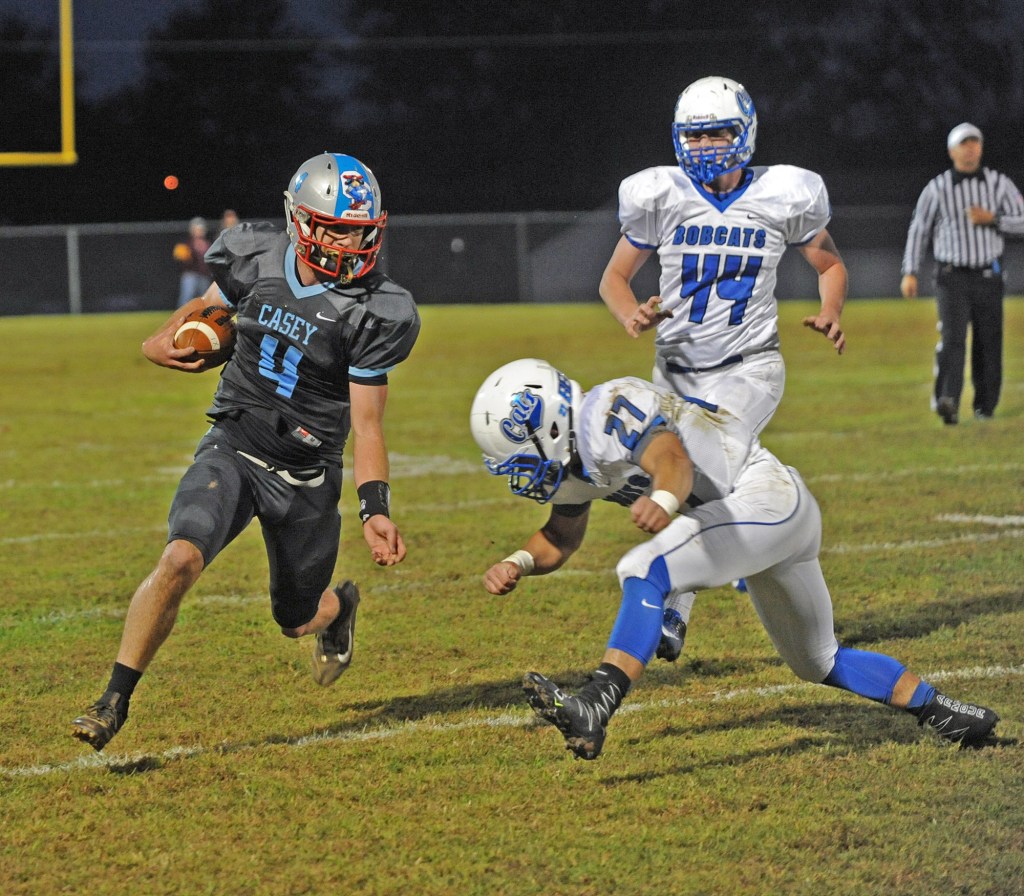 One of them is Casey County.

For the first time ever, the Rebels have won six straight games. Their most recent victory came Friday night against Bell County, plastering the Bobcats 53-14. It was the first win over Bell in school history, with the Bobcats winning the previous five meetings by a combined score of 247-4.

It has been a year of firsts for the Rebels, and it was another statement win Friday.

“This was a fantastic win for our football program,” coach Steve Stonebraker said. “It sets us up for the possibilities of some big things down the road. The important thing is that we were able to get here through hard work, focus and preparation. I am so proud of all of my guys.”

Bell County opened the game with the ball and was driving, but an interception by Collin Miller at the one-yard line ended the Bobcats’ drive.

Casey proceeded to drive 99 yards for its first touchdown of the night, capped by a two-yard run by Dalton Summers.

On the next kickoff, Casey recovered its onside attempt and 90 seconds later, Summers punched in a touchdown from six yards out.

“This was truly a team win,” Stonebraker said. “Our scout team defense played our varsity guys well on Wednesday and forced us to make some key adjustments to our game plan. We knew coming into the game that Bell County would blitz us more than any team that we have seen all year. Our offensive line picked it up and did a great job giving us time in the passing game and giving our backs running lanes.”

Miller scored his first touchdown of the night early in the second quarter on a 54-yard screen pass from Breece Hayes. Miller carved the Bell County defense on his way, catching on the left side of the field and finishing his run on the right side of the end zone.

“Collin Miller made some really great plays out there tonight,” Stonebraker said.

Casey’s other receivers made their mark as well, with Hayes racking up 319 passing yards. Britt Pendleton and Preston Tucker each had four receptions, and Miller finished with seven catches for 189 yards and two touchdowns.

“Preston Tucker also did a tremendous job in receiving, rushing and this was his best game blocking,” Stonebraker said. “Dustin Richards made some key catches for us tonight, as did Britt Pendleton.”

Bell County scored its first touchdown of the game with 5:33 left in the first half, but Casey responded in a big way. The Rebels scored two more times in the final five minutes to take a 33-6 lead into halftime.

Stonebraker credited his defense for coming out strong.

“Our defense had their best week of practice all season and it became their best game performance of the season,” Stonebraker said. “I am so proud of them for stepping up to the challenge. Our defensive line of Austin Campbell, Collin Allen and Jacob Wilson dominated the line of scrimmage. Dalton Summers and Collin Miller had their best defensive games of the year. Middle linebackers A.J. Glenn and Gary Propes were able to get to (Bell County’s) backs and make a ton of tackles.”

Casey put on the running clock after two scores in the third quarter, a nine-yard run by Hayes early in the period and a 73-yard pass from Hayes to Miller at the end of the quarter.

The Rebels’ high-octane offense had their fans on their feet for most of the game, and Stonebraker said it was a great fan performance.

“The atmosphere tonight in our stadium was outstanding,” Stonebraker said. “This is what high school football can really be about. We had a great showing of fans and support tonight. I am so happy that our kids were able to play a great game for them. The excitement and momentum that we have in our program right now is really strong.”

Bell County’s Nathan Collett scored on a seven-yard run in the fourth quarter, but any kind of momentum the Bobcats’ hoped to finish the game with was squashed when Miller returned the ensuing kickoff 79 yards for the score.

Now, Casey will take a week off before traveling to Jackson County.

“This open week comes at a great time for us,” Stonebraker said. “We have been fortunate to stay healthy and can heal up some bumps and bruises. We always give our kids weekends off so they have some time built in to recover and refocus mentally. However, our coaches are sleeping three or four hours a night on weekends with our responsibilities, so this comes at a great time for us to be able to recharge and recalibrate before heading into the back part of our schedule.”