Back to earth: Danville grad didn’t train to be a farmer, but made his dream come true by becoming one 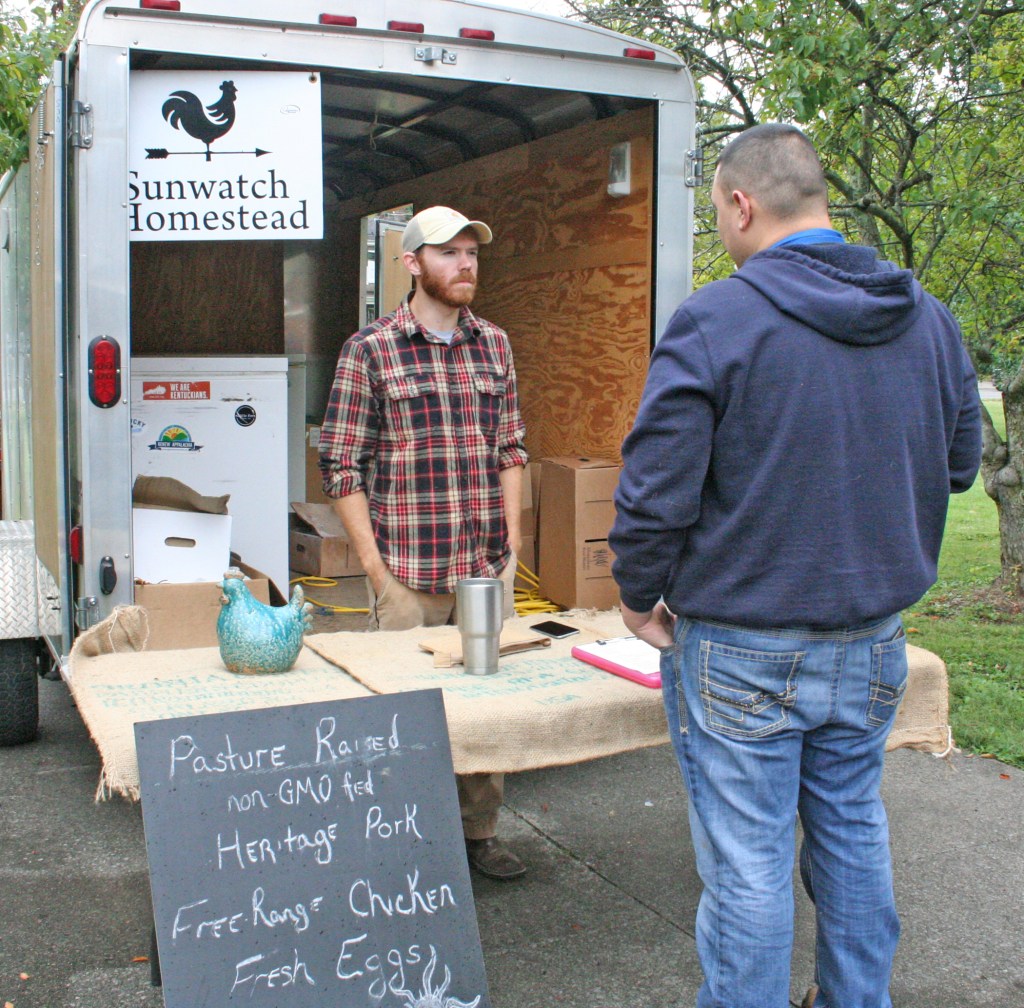 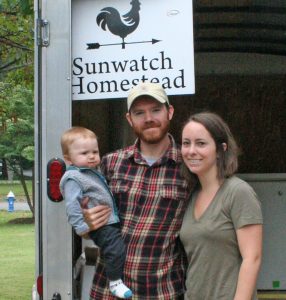 kendra Peek/kendra.peek@amnews.com
Tyler Greene, with his wife Brittney and their son Fox, at the Farmer’s Market on Saturday.

Tyler Greene does not fit the stereotype of a pig farmer.

He spent his early years visiting his grandfather’s farm, but never after his childhood. He never participated in Future Farmers of America or took classes in agriculture.

A 2005 graduate of Danville High School, Greene said he wanted to pursue farming, but was encouraged to go a different route, so he did. He attended Western Kentucky University, first showing an interest in photojournalism before settling on a degree in history and social studies. He graduated in 2009.

But he knew he always wanted to be a farmer.

“It’s what I always wanted to do,” Greene said. “It’s always been my dream — every aptitude test I filled out, I was either (supposed to be) a farmer or a forester.”

So, about a year and a half ago, he brought his dream to life, restoring his grandfather’s farm in Lancaster, which had sat vacant for about 20 years. The more-than-200-acre property is owned by his mom and uncle and Greene leases about half of it for his farm, Sunwatch Homestead. The other half is leased by neighbors.

For Greene, part of the drive to farm is a desire to know your food supply.

“(Farming) is what people have done for generations and generations, for several hundreds of years. Suddenly, in the last 50 years, people have come off the farm. It’s where I think we need to be,” he said. “I think everybody’s a little more conscious now, or trying to be, of what they’re eating.”

He said it’s also a boost for the local economy.

“I think that putting more people back on the farm and doing farm-to-table sales like that is really going to help the local economy,” Greene said.

Especially when there are opportunities such as the Boyle County Farmer’s Market, he said. 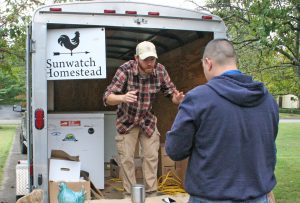 “It’s a nice community event. Everybody’s out talking and having a good time. With Danville having so many other things — runs and festivals and all — it’s kind of like a little jumping off place, really. It seems like everybody comes here before or after.”

Greene is not the only younger farmer at the market. He said seeing young farmers doing their jobs can encourage other young people to get back into farming.

“A lot of people grow up and they think there’s no other choice besides that. If you’re the best and the brightest, you get pushed to do other things. I was not the best and the brightest and I still got pushed to do other things,” he said with a smile. “We need those types of minds on the farm, we don’t need non-thinkers on the farm. We need to encourage some people who have the desire to farm to go ahead and do it. That’s how innovation happens.”

Greene’s wife, Brittany, fully supports the farming lifestyle, although he said she works full-time at his uncle’s company, where Greene worked before going to farming full-time.

“It’s what we always wanted to do. We wanted to provide food for ourselves. We like to be as self-sufficient as we could be,” he said.

At the core of it all, Greene said, he simply enjoys farming.

“I’m my own boss, for the most part,” he said. It does lead to a lot of alone time and a lot of time with their 8-month-old, Bowen Fox, named after Greene’s great-great-grandfather.

Fox spends a lot of time riding around with his dad on the farm, checking on the cows, chickens and pigs.

Greene raises and sells pasture-fed pork, open-range poultry, and all the side products of those, from eggs to bacon. He plans to start selling beef in a year or so. It’s all antibiotic and GMO free.

His pigs are heritage breed, which provide “totally different” meat, he said. Red wattle hogs and large black hogs, two of the breeds Greene raises, are considered endangered according to The Livestock Conservancy.

Since launching his farm and selling the meat, Greene said he’s gotten a “pretty dedicated following.” While he said he knew he would have the support of family and friends, he has gained so much more support from people at the market.

“Once I joined the market up here, I picked up a lot of new customers that are as dedicated as any family member at this point,” he said.

So much so that he’s begun to learn people’s preferences, such as who likes their meat a little leaner, who wants eggs and pork chops, and more.

During the winter months, when the Farmer’s Market is closed, Greene said he’s still selling and delivering products to his customers.

“My hens still lay 100 eggs a day … It’s nice to have a slow season, I guess, but I have to keep going. Last year, I made weekly deliveries; I tried to do it on Friday afternoon,” he said. “We stay steady on pork, chicken and eggs all winter.”

Greene said he has no regrets in making the decision to go into farming or the path he took to get there.

“I don’t regret going to school for something totally different. I feel like it opened my mind to some other things,” he said.

Reading is fundamental to the trade, Greene said.

“Reading is the number one thing I tell people when they say they’re getting into farming,” he said. “And the Internet is a really big help these days as far as, it allows people like me to come together. There’s pasture pig Facebook pages, sustainable farming pages. It allows you to get with like-minded people.”

There are certain principles of farming that don’t change, Greene said, such as helping each other out. Although he and others at the market sometimes sell similar things, they still encourage customers to visit one another, especially when they run out of certain foods.

“It seems like there’s always someone out there that’s a little further into it that can help you out. Farming is a hard thing to get into,” he said.

And staying in involves a certain amount of stubbornness.

“It’s 3 a.m. and it’s raining and you’re trying to keep pigs out of a puddle … there’s lots of things that will make you hang up the towel pretty quick,” Greene said, with a smile.

“You do it all on the farm — you’re a veterinarian, you’re a mechanic, you’re an animal physiologist. So many different hats you have to wear on any given day. You may be running a water line in the morning and in the afternoon putting your plumbing hat on and putting wire in the barn and putting on your hat as an electrician.”

Besides becoming a jack of all trades, there’s a lot of elemental learning that goes on at a farm; it’s an opportunity to teach kids about life, death, and hard work, Greene said. That’s one reason he looks forward to raising his son in the farming lifestyle.

“There’s a need for kids to get back on the farm,” he said.

His efforts in farming locally have gotten him attention on a larger scale. In August, Greene was named a “Local Food Hero” for the state of Kentucky. The awards were given by the Kentucky Department of Agriculture, Louisville Metro Government, and Seed Capital KY, with the sponsorship of Farm Credit Mid-America. Other winners included Jared Goforth of Fluty Lick Farm in Lawrence County and Sherman Fracher of Abiding Grace Farm Artisan Foods in Mercer County.

Greene is optimistic about the future of local farming.

“There’s not really been a better time for the type of thing I’m doing,” he said.

You can find Sunwatch Homestead on Facebook or every Saturday at the Boyle County Farmer’s Market at Danville High School.